Back in 1987, Jordan Belfort (Leonardo DiCaprio) was an ambitious up-and-coming stock broker on Wall Street but, on the day he received his broker’s license, h also lost his job to the infamous Black Monday. Starting from the bottom, he discovered the wonder of penny stocks, which were much cheaper but garnered the broker a far larger share of the profits, allowing Jordan to quickly create his own company – later named Stratton Oakmont – and rise up the ranks to becoming a ludicrously wealthy hedonist with a penchant for every kind of narcotic available, and many that aren’t. However, Jordan’s wealth and the corrupt manners in which it has been accrued soon come to the attention of the FBI. 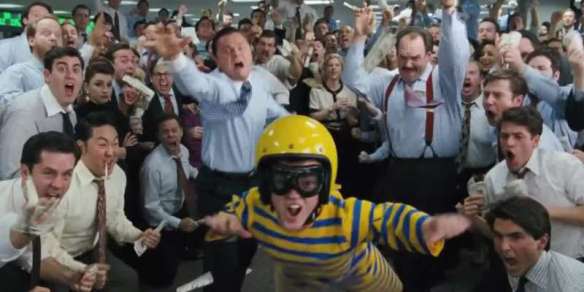 I watched The Wolf of Wall Street in theatres when it was originally released in the UK in January 2014. It’s actually the first film that I saw in the cinema, didn’t review at the time, then cursed myself when it was added to the 1001 Movies List later that year, and have subsequently had o go back and re-watch. The reason I cursed myself was because in that original viewing I was bored. So damn bored. This is a three-hour movie about detestable characters that plays out exactly – EXACTLY – the same way as the far superior Scorsese classic Goodfellas. A huge percentage of the beats in this film were done far better in Goodfellas, and it makes this film seem almost superfluous. Story starts halfway through? Check. Lead character doing a huge amount of narration, sporadically assisted by other minor characters narrating now and then too? Check. Initially ambitious youngster joins a criminal organisation with good intentions, but winds up becoming one of the most debauched members? Check. Cheats on his wife? Check. We discover he has a kid long after he actually has one because they mean so little to him? Check. Copious amounts of drugs? Check. Brought down and evades a hefty sentence by turning against those that helped him in the past? Check. Essentially irrelevant female “characters”? Check. Memorable, Oscar-nominated sidekick performance? Check. The only main differences are that The Wolf of Wall Street is trying – and for the most part succeeding – in being much more comedic, and DiCaprio is a stronger actor than Ray Liotta, but that balances out with Jonah Hill being far, far weaker than Joe Pesci. 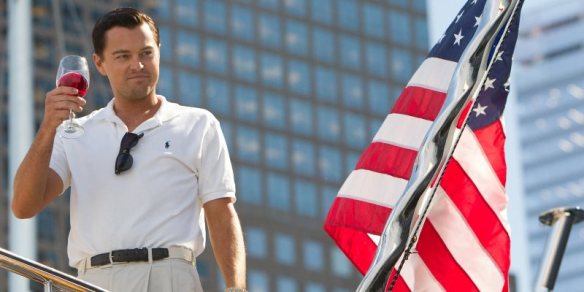 Second time around I still wasn’t won over with the film, but it had improved a little in my standing. I’d initially dismissed DiCaprio’s performance, but he actually puts a lot into it and is maybe a bit more deserving of that Oscar nomination than I’d said at the time, though I’d still push him out in favour of Tom Hanks being recognised for Captain Phillips, but they could both easily stay in and jettison Christian Bale for American Hustle (a film I’m so happy I reviewed after the first watch, because it’s terrible yet somehow got added to the 1001 List too). The whole year can be thrown out anyway, seeing as Chiwetel Ejiofor didn’t win for 12 Years A Slave. It was nice to see DiCaprio taking on a surprisingly physical role that was largely comedic, even if it didn’t have to rely on his own comic timing. DiCaprio is an actor I like, but I can’t understand the army of appalled fans that cry outrage at his lack of an Oscar, especially when you look at the performances he lost to. 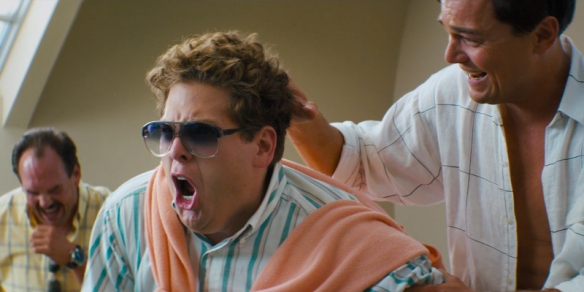 I’m far less keen on Jonah Hill’s performance though. He is an “actor” I’m not a huge fan of, and I can’t say I even enjoy him as a comedian, in that I rarely find him funny, and it angers me that he has two Oscar nominations to his name. My mind boggles. Here he’s too over-the-top and cartoony. He never feels believable, which isn’t helped by his ludicrous teeth and glasses. He especially falls down in the Goodfellas comparison, because he’s up against Joe Pesci, and that’s a fight Jonah Hill can never win. 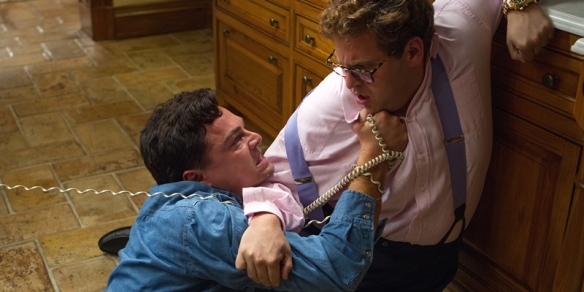 The supporting cast is actually one of my bigger issues with this film as a whole. My problem is that there’s just too many characters, and the actors portraying them were seemingly too well known or too good at the whole acting thing to justify being cut out. There’s a scene on a boat in a storm (or some chop, as they say) which features Shea Whigham as the boat’s captain. Whigham is great in everything he does, which sadly isn’t a great deal here, and it could have been cut quite easily. Similarly, Rob Reiner plays Jordan’s father, Max, who is hired by Jordan to run Stratton Oakmont’s finances. He’s been given the nickname Mad Max because he has a very short fuse on his explosive temperament, but he adopts a bizarre British accent when using the telephone. Hilarious, right? Well it might be, if anything ever happened about it. We see his hair-trigger snap once, immediately cutting to the accent, and in one or two other scenes he’s just already angry at something that it’s justifiable to be angry about. Again, not difficult to justify the cutting. Add to this list Jean Dujardin’s Swiss broker, Joanna Lumley’s classy English accomplice, and the endlessly puzzling non-entity that is Jon Favreau’s minute demi-cameo in a role I’ve all but forgotten. These are all actors I really enjoy – seeing Lumley crop up in a Scorsese movie is a delight – and some of them are integral to the plot, but there shouldn’t be enough room for all of them. Including them all pushed the run-time to exactly three hours, which in a film that IMDb lists as a comedy, that’s a real problem. Comedies shouldn’t drag. They shouldn’t make me bored. Their primary purpose is to entertain, which isn’t happening when I’m checking my watch.

I was reminded several times of Run Lola Run here, specifically with the offhand remarks the narration would make to the end-game fates of some of the most minor characters. Taking a moment to remark upon, for example, the female office worker whose exceptional fellatio technique was enjoyed by every male member of the staff, and that she christened the glass-walled elevator in their new facility with the man she’d then marry, but who would kill himself shortly afterwards seems entirely unnecessary. In Run Lola Run there were various examples of this kind of epilogue using the polaroid photos of people Lola’s exploits tangentially affected, and it worked fine in that break-neck pace which, lets not forget, was only 80 minutes long. Less than half of Wolf of Wall Street. In Lola those mini-vignettes were fine and indeed welcome, spending a few seconds to explore a different medium, and yes padding out the time a little to make it feature length. Here, there’s far too much going on a it is, and these just feel like the wandering mind of a semi-drunken, rambling storyteller. I’m told that the edit for Wolf was hurried to reach the Oscar race, and it shows. Not only in these should-have-been-evicted moments, but also in some conversation scenes, where the visual cutting doesn’t quite match with the audio, scenes stop flowing and it begins to feel a little sloppy and jarring.

Not all the supporting cast should be removed though. Matthew McConaughey’s brief turn as Jordan’s first boss was iconic before and after the film, mainly due to the chest-thumping and humming routine. Margot Robbie is fine as Jordan’s second wife Naomi, but she doesn’t get enough to do to elevate her to a stand-out performance, in a similar way to Kyle Chandler as the agent out to bring Jordan down. I’ve loved Chandler since 2005’s King Kong, and am always happy when he crop up in things. His role here looked sizeable and juicy, but alas he’s not on screen long enough to make too much of an impression beyond the scene he has with Jordan on the yacht, which sadly suffers from some of that clumsy editing mentioned earlier. 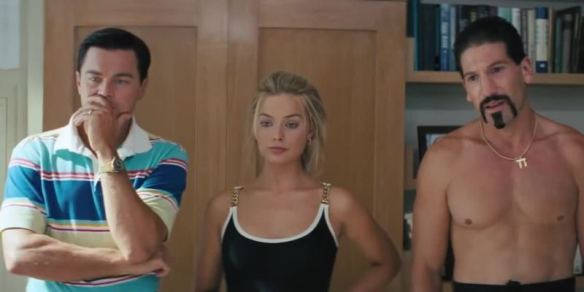 So other than some of the performances, what did I like? Well, a lot of hilarity can be found within the script. If I’m ever in anything even close to a dangerous, life threatening situation I hope I have the wherewithal to bellow “I will not die sober!” to anyone in the vicinity, and now the logistics of midget-darts are a little clearer to me. I also appreciated the inventiveness of some aspects of the narration. There’s a moment when DiCaprio’s character is explaining through narration what quaaludes are, but instead notices that Jonah Hill’s character is about to feel the effects of them, so stops narrating and basically tells us to just watch instead. It’s a very interactive voice-over, reminding me of Robert Downey Jr. in Kiss Kiss Bang Bang, and I liked that.

Unfortunately this is a true story, and it reminds us of this right at the end when Jordan Belfort’s name is amongst the first in the credits, and for me that makes it end on a bit of a bum note. He doesn’t get quite as much comeuppance as I’d like, but that’s real life, which is aggravating, but there’s not a lot that can be done about that. If I hadn’t needed to review this I’d have been perfectly happy never having to watch it again, which is exactly how I feel now. My time with The Wolf of Wall Street is over.

6 thoughts on “The Wolf of Wall Street”