A field trip from an Australian girls’ school to the nearby geographical landmark of Hanging Rock on Valentine’s Day in the year 1900 goes awry when four students separate from the rest of their class to go exploring the rock. Whilst everyone else is asleep, one of their teachers heads off in search of them, but only one of the original girls returns, forcing the rest of the class to abandon those missing, including the teacher, in order to return home before nightfall. The school and town becomes obsessed with finding the vanished girls, as does a young Englishman who happened to see them heading into the rocks. 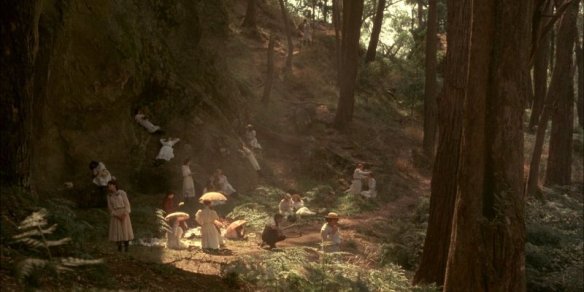 Picnic at Hanging Rock was nominated for me to watch by Daniel Lackey of Forced Viewing and The Nightmare Gallery. It’s a film I’d heard a little bit about beforehand, and unfortunately I had heard what might be considered a spoiler for the end of the film, in that the mystery of the disappearance is never resolved, but I think that worked in my favour. You see, I tend to get quite frustrated at unfinished puzzles, so if I’d been watching this expecting it all to be wrapped up nicely in a lace corset by the end of the film, I’d probably have been a little annoyed at the lack of a satisfying conclusion, but going in knowing there’d still be a few questions come the credits removed any such potential aggravations.

This is a very dream-like film, which is outlined early on, when the girls are reciting poetry (“What we see and what we seem are but a dream; a dream within a dream.”). Clearly there are some kind of supernatural forces at work here – upon entering the Hanging Rock area the horses whinny and all the watches stop at 12 midday, and even before leaving the school the main disappeared girl Miranda (Anne-Louise Lambert) tells her quiet-yet-obsessed friend Sara (Margaret Nelson), who has to stay behind to learn her poetry, that Sara will have to learn to love someone else, as Miranda won’t be around for much longer. I got the impression that Miranda knew more about what was going on than anyone else, and in fact she gave off a distinct Ferris Bueller-like impression, in that literally everyone loves her, and she is the one who everyone is desperate to get back. Her teachers describe her as being “a Botticelli angel” and it is Miranda that the Englishman (Dominic Guard as Michael Fitzhubert) heads after when he follows them on their walk. I wasn’t overly impressed with any of the film’s performances, mainly because there’s so many characters, none of whom are really the focus for long enough to leave much of a lasting impression, but none of them were terrible either, they were all simply serviceable.

It could be argues that the lack of explanation makes the film scarier than if what had happened were clearly spelled out. The threat of the unknown is what makes people afraid of the dark, and in the dark is definitely where this film keeps us. Various possibilities are hinted at, such as Michael having done something nefarious to the girls – the first thing anybody thinks to do or check at any occasion is whether the girls were violated in any way – and at one point I thought the film was trying to imply that at least Miranda had perhaps been turned into a swan. I wouldn’t put it past the film, but if that is the case then I’d maybe like just a smidge more of an explanation as to why.

An odd choice I found was how much time was given over to Sara’s story back at the school. Having not been present during the trip, what happens to her is not caused by those events, and plays out without any kind of mystery. The only relation it has to the disappearance is how close Sara and Miranda were, and the storyline here comes off like something out of Dead Poets Society in its bleakness. I suppose it helps to push forward the final actions of the school’s headmistress, Mrs. Appleyard (Rachel Roberts), who has to deal with the ramifications of the girls’ disappearance, which concerns the parents of her remaining students, some of whom opt to withdraw their children from the school.

Would I have preferred the mystery to have been solved? I think so, but then it would have been a completely different movie. The mathematician in me is frustrated at the lack of a definitive solution, but I can appreciate that this prolonged, eternal unsolved riddle has its own merits, allowing our own imaginations to concoct the fate of those missing girls.

6 thoughts on “Picnic at Hanging Rock”