Cyril Catoul (Thomas Doret) is a kid, who wants his bike. He left it at his father’s apartment, but no-one has heard from his Dad in a month. Cyril lives in an orphanage most of the time, but regularly escapes and goes searching for his father. On one such venture, when he goes to his father’s home and finds it empty and unrented, Cyril tries to gain protection from the kind people who run the orphanage by clutching onto a woman, Samantha (Cécile de France), who agrees to look after Cyril on weekends. She also tracks down his bike, from a man to whom Cyril’s father apparently sold it, but Cyril says this must be a lie, his Dad would never sell his bike, and even refuses to believe it even after he has found an advert his father posted selling the bicycle. Samantha tracks down Cyril’s father at a restaurant where he works, but he wants nothing to do with his son. Without a strong male role model, Cyril soon becomes embroiled in a small gang, led by Wes (Egon di Mateo). 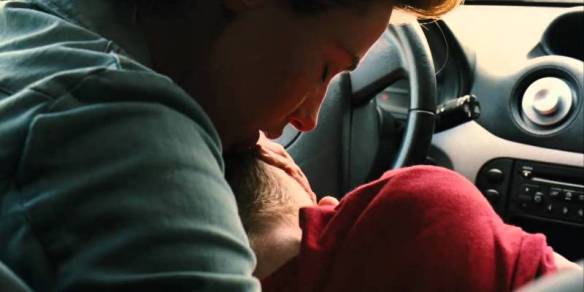 The Kid with a Bike is one of the films from the 1001 Movies list that was picked by Steve and Chip as being a bad one I shouldn’t necessarily have been looking forward to watching and, once again, Steve and Chip were dead right. Directed by the Dardenne brothers, Luc and Jean-Pierre, this is a frustrating and mostly dull story with one of the most irritating child characters ever seen in film, and that’s coming from someone who generally dislikes child characters anyway. This kid is one of the most obtuse individuals put through a plot, and the fact that he is on screen for almost the entirety of the film makes it unbearable towards the end. He’s obstinate in his belief that his father is the greatest human being in history, despite clearly being the worst movie Dad since Tim and Lex’s father let them go visit their grandad on a dinosaur infested island. He listens to no-one, regularly makes the stupidest decisions possible and is oblivious to any ounce of kindness offered by anyone. 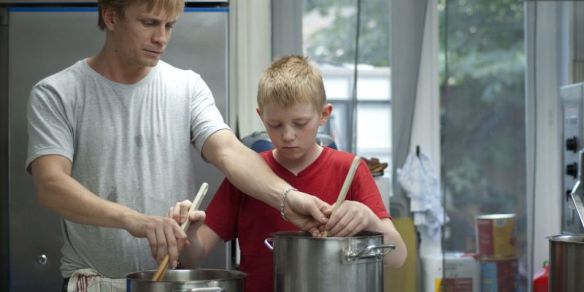 Then again, he’s not exactly alone in being a shit. This film takes a lead from The Color Purple in following the rule that if you own a penis, you’re scum. There are no likeable male characters here. [SPOILER WARNING, BUT SERIOUSLY DON’T SEE THIS MOVIE] First up there’s his Dad, Guy (Jérémie Renier). He essentially runs away from his mother-less child. He put Cyril into an orphanage, telling him it would only be for a month, because Guy couldn’t cope with the child on his own after his own mother passed away. Then, when Cyril shows up, which Guy must have suspected would happen eventually given he didn’t run all that far, he reluctantly meets with Cyril – after not showing up to their arranged meeting and Cyril and Samantha track him down. He takes Cyril’s phone number and promises to call and arrange a meeting soon, then tells Samantha that he wants to make a clean break and doesn’t want to see Cyril again, but can she tell his own child for him. Dick. Next up is Gilles (Laurent Caron), Samantha’s partner. Now, to be fair, for all we know she made the presumably regrettable decision of part-time looking after Cyril without even consulting Gilles, but after the kid plays up a bit too much Gilles gives Samantha the ultimatum of “It’s me or him,” and, when Samantha opts for Cyril, Gilles leaves. Then there’s the gang, a group of four slightly older boys who lure Cyril in by stealing his precious bike and riding it just slow enough for Cyril to keep up and prove his worth to join them. It turns out gang leader and probable drug dealer Wes is recruiting for an accomplice to help rob the newsagents Wes used to work at. He thinks Cyril has what it takes, and Cyril goes through with the job, which involves knocking out the newsagent and stealing his money, but the job goes wrong and Cyril is seen by the man’s son, who he also knocks out. Upon finding out Cyril might be identified, he gives Cyril back the money from the robbery and denies all knowledge, leaving Cyril to take all the blame himself. Cyril then takes the money to his Dad to try and fix his financial woes enough that the two of them can hang out, but his Dad sends him away again, knowing he is on the run from the law. Double dick. And then there’s the newsagent and his son. Now, at least these two have some kind of motive. Their lawyer resolves the matter of Cyril bashing them over the head, and they agree that Samantha will pay back the earnings they lost whilst recovering from their sustained injuries. The newsagent accepts Cyril’s apology, but his son does not. One day, when Cyril is out on his bike running an errand at a shop, he sees the newsagent at says hello. His son also sees Cyril. He chases the younger kid down, with Cyril climbing a tree to escape, so the son throws rocks until Cyril falls and looks like he might have died in the process. Upon discovering the body, the newsagent and son prepare their stories that it wasn’t their fault, Cyril is entirely to blame, before Cyril wakes up and goes home. All men in this film are scum, with the exception of the orphanage workers, but that’s only because we don’t see too much of them, and for all we know they beat the kids behind closed doors, it wouldn’t surprise me. This gender-specific dickishness is really highlighted by just how angelic the sole female character of Samantha is. She goes through far more than any normal person would for a child they had no responsibility for in the first place. The only reason Cyril entered her life was because she happened to be sat nearest him in a doctor’s waiting room when he was trying to hide there. 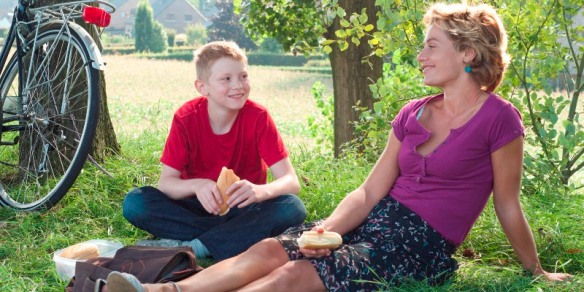 Technically speaking the film is well made. The performances are all solid, even the kid’s, though his default state is “furrowed brow.” The story is well told, clearly, concisely and with good efficiency. coming in at just under 90 minutes, so at least it’s short. It gets a little artsy at times, with shots just resting on Cyril’s face for extended periods, with the kid just riding in an elevator or sleeping, so some of this could have been lost, but it didn’t bother me too much. It’s clear that Cyril’s main aim is to just live an ordinary life. Initially that involves living with his Dad, because that has always been Cyril’s idea of normalcy but, now that he lives mostly at an orphanage, his dream has lessened to just be able to play with other kids in the park, as shown by his longing looks at a pick-up football game, but he is waylaid by Wes’ gang. There’s an attempt to humanise Wes that didn’t really work, showing him caring for his bedridden grandmother whilst his grandfather was out drinking, but he still came off as a terrible excuse for a human being regardless.

I don’t need every character in a film to be likeable, but I do need more than one of them to not be a giant arsehole, and it’d help if I didn’t hope that the lead didn’t survive the climactic fall. As it stands, The Kid with a Bike is well made, but intensely aggravating. Oh, and speaking as a cyclist, I flat-out hated Cyril for never riding with a helmet, never using bike lights (despite at least once riding in the middle of the night) and never locking his bike up. Every time he just abandoned it somewhere I crossed my fingers that someone would nick it to teach the little shit a lesson.

8 thoughts on “The Kid with a Bike”