This film was nominated for me to watch by Jess Manzo from French Toast Sunday, and
also won the the Movie of the Month poll over on the Lambcast. A podcast episode about it will drop in the next day or so. For now, you’ll have to settle for my never-more-rambling thoughts on the subject. Chinatown is a film I find difficult to review, because it’s inherently good quality through and through, but I can’t fully explain why. It’s the kind of film that does everything required perfectly – there’s a solid script, great acting, it all looks beautiful etc. – but it does so in a way that I watch, acknowledge as having been good, but can’t put my finger on any reason why. That’s going to make for a fairly terrible review, I’m well aware, but that’s how it is. I’ll try not to make this just a long list of people and things that were great, but I make no promises. 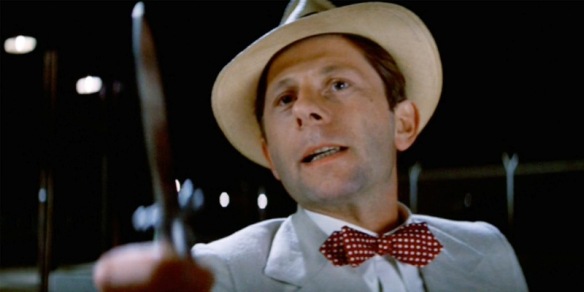 Before going in (this was a first time watch for me) I knew a few key scenes from either seeing clips or just picked up from discussions I’ve had, heard or read. Firstly, I knew at some point Roman Polanski, Chinatown‘s director, was going to show up, stick a knife up Jack Nicholson’s nose and ensure Nicholson will be wearing some kind of bandage for the majority of the rest of the film. I also knew most of the ending, specifically a twist that, had I not known it, would have probably required me to stop the film, rewind and watch it again, just to make sure what I thought I’d seen had actually happened. I knew that Robert Towne had won an Oscar for his screenplay, at that pretty much every other aspect of the film had been nominated for one, including Polanski for director, Nicholson and Dunaway for acting and the film overall for Best Picture, but this being the year of The Godfather Part II, it only won screenplay (Though I’m shocked that it lost Cinematography to The Towering Inferno of all things. Apparently I need to go back and watch that!). And of course, I knew that Chinatown was universally loved, as it appears on all five of the major lists I’m going through, an accolade it shares with just 87 other films. So I knew going in that there was a high chance I’d appreciate this film for something, and I left appreciating it for pretty much everything.

At its heart this is a detective story, in the style of a 1940s or 50s noir starring Humphrey Bogart, which makes it all the more fitting that John Huston crops up as the chief villain, Noah Cross. His is possibly my favourite performance as a man it’s very easy to despise the first time you meet him. He’s had a presence throughout the film so far, cropping up in photos on office walls and in covert shots taken during Jake’s investigation, but when we meet him he adds a whole new level of corruption to the story, and not just because he can never quite pronounce Jake’s surname any way other than “Gits” (it’s more like “Git-tes”).

Nicholson is also great, appearing in every scene as we follow him along, learning information at the same pace as him, although I find any character Nicholson plays to be difficult to think of as anything other than a villain, purely because of how much I associate his face with that of an antagonist’s. Granted here he’s hardly playing a squeaky clean individual, earning a living as he does by photographing others’ infidelity and the like, but as the hero I feel it should be important that I root for him. Eventually I did, after his incessant insulting of other people provided him with a few beat-downs too many and he became very much out of his depth, so points all round.

I’ve not seen Ellen Burstyn’s award-winning performance in Alice Doesn’t Live Here Anymore, or any of the other nominated films from the 1975 Oscars, but if I could pick a second award I think this film should have won for, it would be Faye Dunaway for Best Actress. Her portrayal of Mrs. Mulwray is spectacular and, given how I knew the ending, it really pays off watching for what would have essentially been a second time for me. Her reactions and restraint reveal hidden depths to the character, some past indiscretions she’d rather keep hidden, but they also all make perfect sense at the time they’re revealed or hinted. It’s a product of Towne’s excellent script, but Dunaway’s performance should not be overlooked.

Speaking of the script, I particularly enjoyed two aspects of it. Firstly, this being a detective story I appreciated some of the 1930s tricks of the trade we see on display, such as the placing of a pocket watch behind the wheel of a parked car to reveal what time it moved when the clock gets broken, or the kicking out of a car’s tail-light to make it easier to follow at night. Secondly, and far more impressively, is how the script all comes together and makes even the smallest of moments essential for the conclusion. We begin the film with an Indiana Jones-style cold open, with Jake finishing off his previous case with Curly (Burt Young), by giving him the photographic proof that his wife is sleeping around. Curly can’t pay, but Jake tells him not to worry about, he doesn’t want Curly’s last dime, and then we put these scenes out of our minds. Right up until the end, that is, when Jake goes to Curly for held to repay the favour. In that scene we also take note of Curly’s wife’s black eye and timid demeanour. In the few seconds Mrs. Curly has on screen she has revealed everything we need to know about how she and her husband have resolved that issue from the start. Similarly, when Jake was snooping around the Mulwray estate he had a brief, disjointed conversation with their Chinese gardener, who remarked about something being “Bad for grass.” We don’t know what, Jake doesn’t care what, and it’s brushed aside as being background scene flavour once Jake encounters Mrs. Mulwray. As it turns out, those four little words “Bad for grass” may be the most important in terms of solving the entire case.

Right when you think a traditional noir detective story would be wrapping up, this still has a couple more devastating turns and revelations to reveal. I’ll stop listing all the things that are great and just tell you to go watch the film, and see for yourself.