Clay Gregory (Bill Pullman) has successfully acquired $700,000 via a dodgy drug deal, but he wasn’t expecting his wife Bridget (Linda Fiorentino) to run off with it whilst he was in the shower. She flees New York City and lays low in the small town of Beston in Buffalo, aware that if she spends any of the money and her husband catches up with her he’ll legally own half of her belongings, and she can’t go back to New York or he’ll find her. So instead she settles down in Beston with the unassuming Mike (Peter Berg), a local man back in town after something went wrong with his recent marriage in Florida. Mike wants out of Beston, and Bridget knows just how they can help one another out. 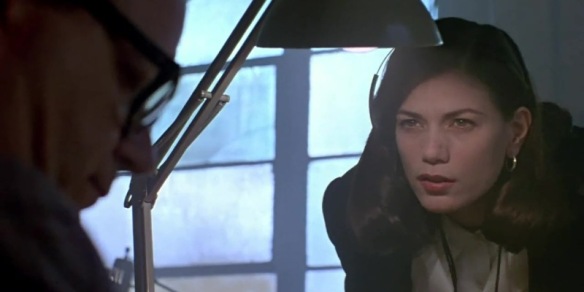 The Last Seduction was nominated for me to watch by Vern of Vern’s Video Vortex, the As You Watch podcast and the Film Pasture. I’ve discussed before how a film being on the 1001 Movies list imbues a first time viewing with a level of expectation, an anticipation of my waiting for something to shine through from the film to denote why it has been deemed essential viewing. Sometimes it will mark an early, integral work of a renowned director, actor or writer. Elsewhere it’s an awards-garnering classic or a feat of special effects, and other times I’ve really no idea. It’s these films, of which The Last Seduction is a fine example, that leave me more than a little stumped when it comes to reviewing them.

The Last Seduction is, overall, a good film. It’s a solid pulpy thriller with good acting, interesting characters and compelling predicaments, but it’s missing that vital spark that gives me a reason to recommend it. Considering the List already has the likes of Body Heat and Fatal Attraction on it, why do we need this to? Yes it’s got the best performance I’ve seen from Fiorentino who absolutely eats up the screen with a superbly confident portrayal of a woman unafraid to be labelled a hard-nosed bitch but really that’s all there is to set it apart from the rest of the pack.

Maybe I’ve seen too many con artist thrillers, but the plot here was also incredibly by the numbers. I knew practically every detail as soon as the main characters were introduced, with only the reveal of Mike’s marriage issues being anything close to a surprise, and that didn’t bother me because I’d all but forgotten he had any at that point. In fact, Mike was kind of an annoying character, whose incessant whining and confusion grew tiresome after not long at all. Also Bridget has a habit of writing things backwards which seems to have been included for one moment of investigative work, but never pays off later in a way that it’s built up to. Hell, it wasn’t even as sexy as I’d expected, not that that would have improved the film in my book, it would just make it more understandable as to why it had been included on the list.

I did appreciate some of the 90s small town tropes. Clay hires a private detective (Bill Nunn) to track down Bridget and asks some of her Beston colleagues about her. When they later see Bridget it leads to this glorious exchange:
Colleague A: “There was a black man here to see you.”
Bridget: “What did he want?”
Colleague A: “He didn’t say; he was black though.”
Colleague B, just arriving on the scene: “Did you tell her about the black man?”
Wonderful. Also, Bridget’s dealings with the man scoping out her house were pretty fun too.

My biggest issue was how much certain later potential plot points involving murder and deceit were discussed without actually being depicted. It’s more of a plot issue than anything else, but it hinted at more action and excitement than was actually given. Either way, whilst I can see people enjoying this film for what it is, it’s not enough to be List-worthy.

1 thought on “The Last Seduction”