One Saturday, five kids from different social cliques are all brought in for a day’s detention. Over the course of the day, they’ll find that their generic labels – the athlete (Emilio Estevez), the princess (Molly Ringwald), the brain (Anthony Michael Hall), the criminal (Judd Nelson) and the basket case (Ally Sheedy) – may not reveal every detail about their respective personalities.

Fair warning, of the many numerous biased reviews I’ve ever written, this is likely to be up there amongst the most. Previous years have seen me write about how I came too late to the likes of Stand By Me and The Goonies, but The Breakfast Club found me at just the right time to be my coming of age movie. I’ve no idea how many times I’ve seen it or how long it had been since my last viewing, but when I sat down to watch this last year it felt like an old friend had arrived to spend some time, chill out and shoot the shit for a while, and it was wonderful. I appeared on an episode of the Mad, Bad and Downright Strange Showcase to discuss it, as well as an episode of my own Lambcast, and I’d happily appear on any podcast that would let me discuss this movie.

So what drew me to it? Well, I think when you watch this film you tend to be drawn to a certain character, and growing up for me that was Anthony Michael Hall as Brian. He’s the nerd, the maths whiz, the kid who couldn’t handle the pressure of getting a bad grade. Back in school, that was very much me, and I saw a lot of myself in Brian, even more so if you doubled his weight. Not to derail everything, but he and I went through something similar, and that helped weld me to the narrative as a whole.

All five of these characters are perfectly drawn throughout the whole film. Take how we meet them, arriving at school on the Saturday in question. Molly Ringwald’s Claire is being punished for cutting school to go shopping. She is dropped off by her wealthy father, who in doing so apologises to Claire, and says he is going to make it up to her, presumably with a similar shopping trip to the one she is being punished for taking. Brian on the other hand is dropped off by his disappointed mother, who asks him if this is “The first time or the last time” they’ll be dropping him off for a Saturday detention. This is clearly the most shame their son has ever brought upon them, and they’re intent on making sure Brian never does this again. Emilio Estevez’s Andrew is also dropped off by his father, who is concerned that having a negative school record will impact his chances of getting into a college with a wrestling scholarship, whereas Ally Sheedy’s Allison’s parents just drive away without even saying goodbye. Bender (Judd Nelson) just walks up on his own, clear there’s not a lot of people in his life that give much of a damn about him. So much can be drawn from the characters just from these small moments alone. The same goes for lunchtime. Claire has posh, low-fat sushi. Andrew eats enough for a whole family. Allison makes a sugar sandwich and Bender steals Brian’s well balanced packed lunch. 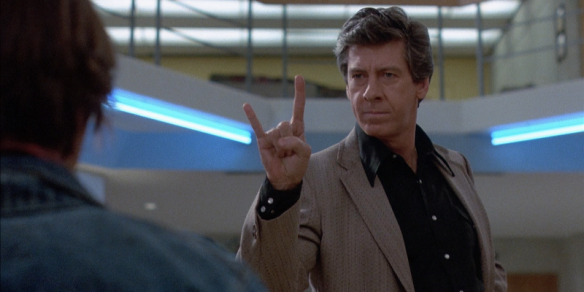 For me, the real key to what makes The Breakfast Club so enjoyable is Dean Richard Vernon (the great Paul Gleason). He is essentially the villain of the piece, the authoritarian retaining the five against their will and attempting to thwart their antics at every turn, predominantly those of Bender, his nemesis. Pretty much every line Gleason says is gold, and his character became so iconic that Gleason even reprised it for the under-rated parody Not Another Teen Movie.

Yes there are some very cheesy moments. I’ve never been particularly keen on the drug-induced dance number, or Andrew’s glass-shattering primal scream (John Hughes said in an interview years after the film that he wished he’d cut that bit out, and I agree) and some elements devolve into farce, such as the run through the halls turning into essentially an ancient Greek labyrinth with Vernon as the Minotaur. Also, some of the themes towards the end are a little questionable, but I’ve never minded them and in fact some of them perhaps play out truer to life than people might think. In many instances the introverted, seemingly-oddball girl doesn’t get the hot guy until she steps out of her shell, and many girls like the guys that are mean to them. Plus, I’ve never had any problem with Brian being the one made to write the essay for everyone. That’s exactly how I’d imagine the day going.

Like I’ve said, this film has it’s flaws, but I’ve watched it do many times and enjoy it so much that I can’t help but look past them at all the parts I love. I can understand people not liking it, but I hope I always do.

4 thoughts on “The Breakfast Club”