After the death of one of their partners, three cabaret performers accept a job playing at a hotel in Alice Springs, two weeks drive away from their Sydney home. Equipped with a tour bus they christen Priscilla, the trio set out across the barren wastes of Australia, dealing with prejudice and other obstacles along the way.

Over at the LAMB this month’s Cult Chops genre of choice is New Queer Cinema, which is apparently the correct name for it regardless of how politically incorrect it seems to be. As such it seemed a perfect time to cross The Adventures of Priscilla off the 1001 List, as it’s a film I’ve owned for a few years but have never gotten around to watching until now. It played out pretty much as expected – three mis-matched people initially annoy each other but gradually resolve their differences and achieve their respective character goals in a largely episodic road movie – but it’s pretty damn entertaining along the way.

The source of this entertainment is primarily the three leads. Hugo Weaving is Tick, aka Mitzi Del Bra, who initiates the pilgrimage with an ulterior motive to see his estranged wife (Sarah Chadwick), who owns the hotel they are to play at, as well as meet, for the first time, his young son. Weaving is fantastic here, in the only lead role I’ve seen him in, and the shape of his exceedingly expressive face is perfect for that of a drag queen. It seems to be all in the eyebrows. The youngest and most flamboyant of the trio is Adam (Guy Pearce), who goes by the stage name of Felicia Jollygoodfellow. Adam is up for pretty much anything, but for the most part he wants to climb King’s Canyon in full drag get-up. Pearce, who I think is an actor Hollywood just didn’t know what to do with but who should have had an A-list career by now, is great, sinking fully into the role and stealing every scene he is in. The final and most seasoned member is Bernadette Bassinger (Terrence Stamp), a transgender individual who is mourning the aforementioned bereavement and needs some time away from home to recuperate. Stamp has made a career out of looking miserable on screen, and his role here is almost a parody of that. I’m pretty sure the guy never even thought about smiling throughout the entire film. I understand that the character has recently undergone a severe tragedy, but even when performing some of the move up-beat musical numbers he looks more like he’s still reading the eulogy than attempting to entertain a crowd. I also found Stamp’s delivery to be quite flat, and felt as though his whole performance was more than a little phoned in, but there’s a chance this could just be in comparison to the flamboyance of his co-stars.

I’m not a fan of drag shows, or rather I fail to see the appeal, but in spite of this I still found some of the musical performances – primarily involving the three dancing and lip-syncing to gay anthems from the likes of the Village People and ABBA – to be very entertaining. The costumes were also as excessively astounding as is to be expected. At one point Guy Pearce goes out wearing a wig made of blue plastic, a thong and a corset, whilst Hugo Weaving wears a dress made entirely from neon flip-flops.

It’s not all fun and games on the journey though, as the trio receive far from warm welcomes at most of their stops along the journey, with the Australian outback not being the most understanding of locales for these three. Even when an evening involving a rapidly quashed outbreak of prejudice ends up going seemingly well, the three still wake to find “AIDS FUCKERS GO HOME” graffitied on the side of their beloved Priscilla. These themes of acceptance – or a lack thereof – are explored well, particularly with Weaving’s character, who predicts his son will not be able to comprehend his father’s occupation, so goes out of his way to attempt to “man up” and hide his true self. In a sense, Weaving’s Tick is so affected by their reception everywhere along the route that he is unable to even accept himself. 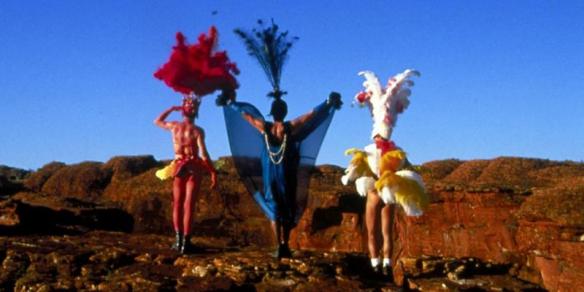 If, like me, the idea of going to a drag show fails to pique any interest whatsoever then please don’t be dissuaded by this film, it’s far more than just that. These are well drawn characters, mostly very well played and highly entertaining to boot. Just a shame Terrence Stamp was still unable to learn what fun is.

9 thoughts on “The Adventures of Priscilla, Queen of the Desert”