Suzy (Jessica Harper) is an American dance student arriving in Germany to attend a prestigious ballet academy. However upon arriving during a heck of a storm Suzy is greeted by a mysterious girl fleeing the school shouting something about irises, and finds her entrance into the school prevented. The next day Suzy successfully gains entrance and begins her training, but the girl who ran away was mysteriously – and pretty horrifically – murdered the night before, and that’s only the beginning. 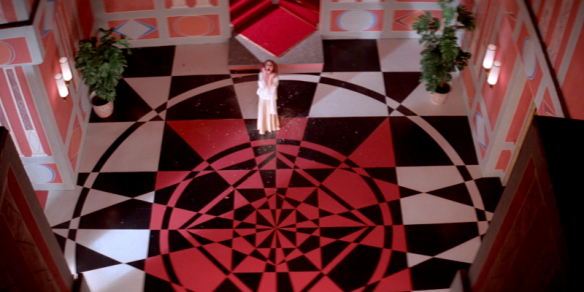 On a recent episode of the French Toast Sunday podcast devoted to the best death scenes from 80s horror movies, the show’s host and FTS’ grand poobah Lindsay mentioned a Dario Argento film called Opera, which features a character being tortured with nails attached to their eyelids, preventing them from blinking with the promise of an impending and permanent poking. I’m not a fan of eye trauma in movies (or real life) so before watching Suspiria I had to check with Lindsay to make sure there was nothing I’d have to physically look away from, and fortunately she reassured me that whilst there are some gnarly deaths, none of them are of an ocular persuasion. She also warned me that I probably wouldn’t enjoy the film as from a narrative standpoint it isn’t exactly a heavy weight and, on this front, she is indeed correct.

Story-wise there’s a lot to be desired, with little explanation for many events. It turns out there’s some form of conspiracy at the school and Suzy, along with her new friend Sarah (Stefania Casini) begin looking into it, however it’s unclear just what the inciting incident was that prompted this investigation in the first place. What is wrong that these girls are intent on getting to the bottom of? Other than some particularly harsh teaching methods – when feeling ill, Suzy is made to keep dancing and dancing until she literally collapses with a disconcertingly vivid blood seeping from her nose – there doesn’t appear to be anything untoward happening. It’s almost as if the characters can see the film they’re in and hear the ever-present, ever-oppressive and ever ominous score, or see the frankly worrying set design and use of lighting, which behaves in a way entirely unfamiliar to physics. This is very much a mood-based film, intent on placing the viewer in a state of unease rather than ensuring every little detail is in place to form the most coherent and concise of plots. 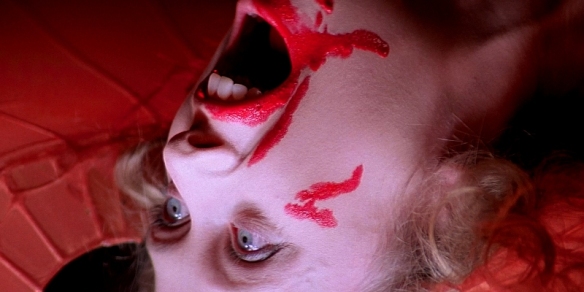 Horror-wise there are indeed some graphic deaths. The aforementioned fleeing girl suffers one of the worst, being grabbed by a mysterious hairy arm and pulled through a window, before being stabbed multiple times and having a cavity cut into her chest so her still-beating heart can be punctured with the final thrust, before being finished off by being hanged in a fashion that manages to impale and kill her friend with falling window debris. I’ll leave the other deaths the be surprises, just saying that some business with a dog was downright shocking. Context and atmospheric clues led me to believe that something was going to happen when it did, but the actual events were a genuine WTF moment. Oh and the maggots. Ick ick ick.

One issue I did have was the chemistry between the actors. It was very clear to me that this was an international production, with many members of the cast speaking in their own native languages and being dubbed over into English later on. As far as I know this is the only option available to watch the film in, so there are numerous scenes where actors are speaking to one another without knowing what the other is saying, merely waiting for the right gap to insert their own halve of the dialogue in whichever language they choose. This removed a great deal of the flow from many conversation scenes, which ended up feeling distant and stilted. The dialogue didn’t really help matters either, nor did the painfully crow-barred in exposition scene, with Rudolf Schündler and a young Udo Kier tag-teaming some man-splaining to Suzy late in the film.

If you’re after an effective disconcerting film that focuses far more on atmosphere and visuals – everything in the school is red, it’s like the whole place is used to develop photographs – then this is the film for you. Personally I’d have liked a bit more plot and a cast that could literally understand one another, but I feel this was exactly what Argento set out to achieve. However, as much as I’ll praise the interior design, the framing and the overall creation of mood in the film, it’s not something I’m ever likely to come back to again, though some bits are probably stuck in my head.