In the 23rd century, mankind is undergoing a widespread mission to colonise other planets. Twenty years before the story begins, a ship arrived on the planet Altair IV and now a new crew, captained by Commander John J. Adams (Leslie Nielsen, back in his serious acting days), has been sent to see what has become of this quest. Upon arrival they are warned off by Dr. Morbius (Walter Pidgeon), but decide to go anyway, only to discover that Morbius is the only surviving member of the original crew, along with his daughter Alta (Anne Francis), who was born on the planet and knows little of the outside world. Her presence causes friction amongst the crewmen who haven’t seen a woman in months, and the addition of Morbius’ assistant, the giant Robby the Robot, doesn’t really help matters either. 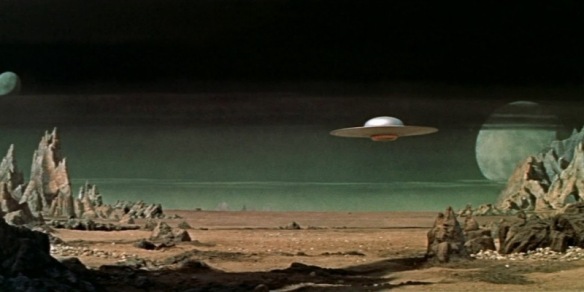 Looking back, the 1950s is often viewed as amongst the quaintest of times, with a rose-tinted “Gee-whizz!” attitude to life that was very much reflected in many of the movies from the era. It can also be seen as a time of rampant sexism, be it intentional or not, which when viewed from today’s standards is beyond laughable. Such is the case with Forbidden Planet, a film depicting a large group of sex-starved young men and a lone age-appropriate virginal beauty whose longest skirt barely covers her backside. There is literally a scene in which the crew’s commander requests that the girl’s father make “certain allowances” for his crew, presumably meaning to forgive any obsessive or creepy behaviour they may have towards Alta. Much later, her father even refers to her as an object, and upon immediately meeting her one crewman warns her off any of the other men to keep her for himself, basically urinating on her to mark his territory. Of course an all-male, all-white crew wouldn’t work today, nor would such comments as a robot being a “housewife’s dream!” but this is very much a sign-of-the-times element, so it’s hard to get too annoyed. 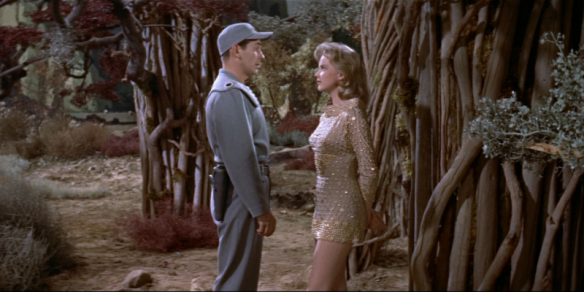 What was terrific for the time though are the visuals and effects. It seems the crew of the previous mission were all killed by a mysterious monster that miraculously left Morbius and Alta alive, and whilst initially having this creature be invisible felt like a giant cop-out, when certain elements are eventually seen it works incredibly well. Yes it’s obviously a hand-drawn animated outline overlayed onto the film cells, but it works far more effectively than it should, and the effects to simulate a giant invisible being are great too, using similar techniques as The Invisible Man back in 1933. The production design is also a joy to behold. The ship the crew arrives in has a traditional flying saucer vibe – again laughable given modern understandings of things like gravity, aerodynamics and generally not dying on impact – but the set-up inside is fantastically realised, but even more so is the home of Morbius and Alta, and the vast secret scientific lab Morbius works in. The most iconic piece of design from the film though must be Robby the Robot, cheekily credited as playing himself. He has an almost steampunk-like ascetic, with spinning rings, a transparent head and visible circuitry, plus a glib sense of humour that must surely have been an influence for TARS in Christopher Nolan’s Interstellar. Yes he moves awkwardly, almost as if he’s just a man in a big robot suit, but it’s part of the appeal. 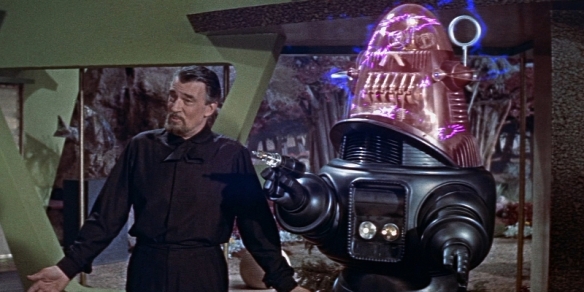 My only real complaint, and this is most likely a personal gripe, is I wasn’t a fan of the identity and motivation behind the monstrous creature, which felt a bit too far-fetched and implausible, even for a film with a robot that can recreate vast amounts of alcohol – including the glass bottles – using a matter replicator. Regardless, the film remains very enjoyable whilst still dealing with a serious story, looks incredible throughout, and is tremendous fun all the way through.