Cody Jarrett (James Cagney) is the brash, ruthless, potentially crazy head of a crime gang in California. After a train robbery draws unwanted police attention, Cody decides to take the fall for a smaller job in Illinois, heading to prison for a minimal sentence. The police see through his ruse but entertain the plan anyway, as they have a scheme of their own involving an undercover officer (Edmond O’Brien) who will become Jarrett’s new cell mate, Vic Pardo, whose mission is to discover the identity of Jarrett’s money launderer. Cody must now deal with being away from his gang, his girl (Virginia Mayo) and, worst of all, his Ma (Margaret Wycherly)

I’m reviewing this as part of MovieRob‘s Genre Guesstimation series, which for this month is all about Prison Movies, a category I was honoured to be asked to choose. I picked prison movies because, for some reason, a lot of the films that I adore seem to revolve around incarceration. Films like The Shawshank Redemption, The Great Escape, La Grande Illusion, Chicken Run, Toy Story 3, Cool Hand Luke, Papillon, The Green Mile, Con Air and Escape From New York all rank pretty highly with me, so this seemed a good choice. White Heat is on the 1001 List and cropped up on Wikipedia’s list of prison movies, so again this seemed the perfect time to cross it off, especially as the DVD has been sat unwatched on my shelf for years, as part of a James Cagney collection none of which I’d gotten around to seeing before. As it turns out only approximately a third of this film takes place within the confines of a prison but that didn’t matter, it’s still a fantastic film.

This is my first James Cagney movie, and even if a bunch of his other work wasn’t on the 1001 List, this certainly wouldn’t be my last. He has such a dynamic, captivating screen presence, commanding every inch of the frame with his boundless wrath and vitality. His Cody is an unpredictable creature, prone to painful, debilitating headaches that can only be relieved via his Ma’s massages to the back of his head. He has no qualms about killing his own men or putting them through harsh ordeals as long as he and his ma – and his wife Verna, I suppose – come out OK the other side. Jarrett’s nature is also shown by how others treat him. Early on one of his gang members, Big Ed (Steve Cochran) alludes to another member that he plans to usurp Cody, to which he is met with the reply “Where do you want [your] body sent?” Later, when Cody is voluntarily in prison, he receives some extremely bad news whilst in the mess hall. The news arrives from another inmate, sat several seats down, and is passed via whisper from one person to another. The first few, who all understand the severity of the information, deliver it to the next recipient with no pause or second thought, but when it reaches the penultimate prisoner – the one who must tell it to Cody – the frozen grimace of sheer terror on the guy’s face tells you just how terrified everyone is of the reaction this news will undoubtedly provoke.

It’s not just Cagney that makes the film excellent, there are some fantastic set-pieces throughout, and in fact the whole plot keeps moving at a rapid pace, often changing tone and locale to retain the interest and increase the entertainment value. The first act features a train robbery, car chase and a particularly excellent tailing sequence, whilst the climax is essentially one big heist, shown in the planning and execution stages, with the police closing in. I especially enjoyed the inclusion of a convict who could potentially cause serious issues for the undercover cop, and the various developments that occur within that plot, and it was appreciated that the more explosive elements of the climactic setting – giant spherical gas tanks – don’t go unused. 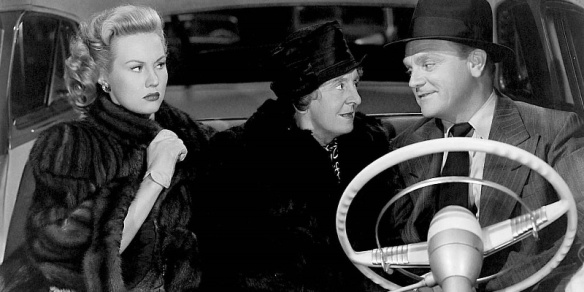 The supporting cast is also terrific without a foot put wrong between them, even the smaller roles. Stand-outs are Mayo as Verna, who is entirely believable as an opportunistic gold-digger, Edmond O’Brien’s solid, dependable turn as the undercover agent, and of course Margaret Wycherly as Jarrett’s Ma, who taught him about Troy and the wooden horse, but apparently neglected the tale of Oedipus. Really though, the main reason to watch this is Cagney, whose brilliance I cannot stress enough.