Three years ago I was invited to the premiere screening of Vigilante, an independent film I’d heard good things about. Now, finally, that film has garnered a release, under the new name of Small Town Hero, and in the hopes of increasing its notoriety I’m re-posting my review, under the new name. Small Town Hero will be released on iTunes, Amazon and Sky Store on Monday 6th May, and I heartily recommend you check it out. 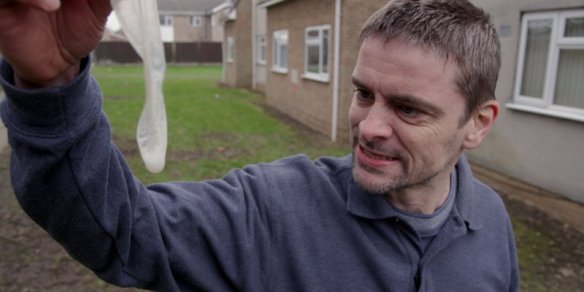 Small Town Hero tells the story of Pep (Simon Cassidy), an idealistic yet loud-mouthed bloke who wants to clean up his town, primarily using his fists. After sorting out a group of young vandals, Pep becomes something of a local hero and is invited to join the Neighbourhood Watch, wherein he is able to become a more proactive figure in terms of keeping the peace. However, once he evolves from protector to pest, Pep uses rumours of a suspected paedophile in town to attempt to reclaim his title of hero by undertaking a one-man manhunt. Shot in the style of a documentary focused on Pep, Vigilante lives or dies on the lead performance and fortunately Cassidy, who is on screen for almost every second of the film, delivers a phenomenal performance. He fully sinks his teeth into Pep’s bulldog tenacity, taking a character who could so easily be seen as a monster and imbuing him with a more humane side that makes some of the latter narrative turns all the more gut-wrenching. Think Sean Bean via Jackie Earle Haley; a working class quality but with a compact, barely contained ferocity simmering underneath. There are a couple of standout scenes involving Pep’s particular brand of justice that deliver unexpected degrees of tension and shock, with a gripping climax shot in an economical yet entirely effective manner that can’t be looked away from. The humour may be a little dark for some, particularly around the paedophilia aspects and Pep’s means of attempted capture of the paedophile (they weren’t too dark for me, but I can see others potentially being turned off) but all in all this is a taut and affecting indie drama. It doesn’t over-use the documentary format which never feels overly staged or implausible, and the supporting performances are also terrific, particularly Millie Reeves as Pep’s pregnant ex-wife and Johnny Vivash as a potential suspect, but this is Cassidy’s chance to shine. If he doesn’t go on to more high profile work after this then there’s no justice in the world.