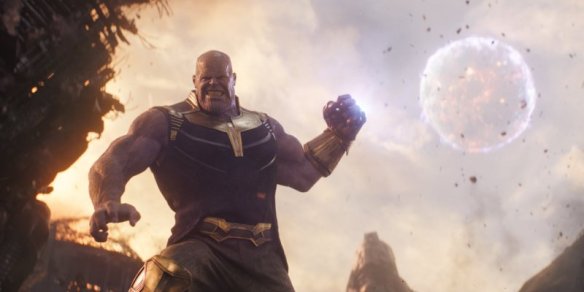 Avengers: Infinity War has been described as the most ambitious cross-over event of all time, but clearly the hyperboles of the world had forgotten about the run-up to cover Avengers: Infinity War, in which Robert from To The Escape Hatch, Paxton and CT from Nerd Lunch and myself got together to review all the films between Age of Ultron and Infinity War, for which I contributed this review of Spider-Man: Homecoming, still one of the best all-round enjoyable popcorn movies in the MCU. Now, with Avengers: Endgame mere days away, we’re doing the same again, looking at the three films released since that last saga, and I pulled the multi-headed purple straw of Infinity War. It’s taken me a while to get to this review, for which I’m very sorry, but reviewing Infinity War is a daunting task. Also, this is probably going to go full spoilers, almost immediately. 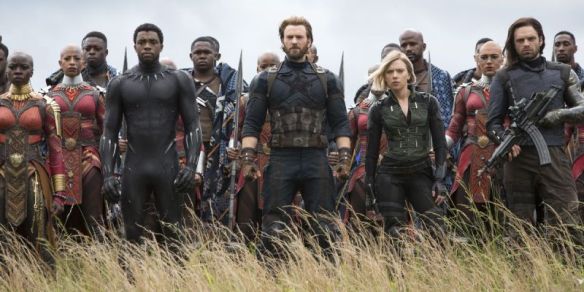 See, a lot happens in Infinity War. A lot. To a lot of characters, who we’ve spent a decade watching overcome one adversity after another, for the most part individually, but now the threat is so great, and so all-encompassing, so galaxy-spanning, that it makes sense for everyone to be involved, and for the most part they are all brought to their various states of togetherness in organic, plausible ways. Tony Stark doesn’t have a big red magic phone to call up the Guardians of the Galaxy and have ’em swing on down, picking up Thor on the way and meeting him and the rest of the crew in Wakanda. No, Stark has a ratty old flip phone with Steve Rogers’ number on it, and he’s trepidatious to even use that. It’s much more satisfying for Thor to be left floating in space after an altercation with Thanos, be picked up by the Guardians, who themselves split up, half to get Thor a new weapon, half to try and cut Thanos off from picking up another stone. Elsewhere Thanos’ hench-people, the Black Order, follow a bifrost-transported Bruce Banner to Earth, where their presence caused Dr. Strange, Stark and Peter Parker to head to Titan, where they meet up with half of the Guardians. Back on Earth the remaining Avengers head to Wakanda with Vision, who has an infinity stone embedded in his forehead, so that Shuri can remove and destroy it, which is where Thor, Rocket and Groot Mk. II end up for the final climactic battle. I’ve skipped some steps here and there, but for me the most impressive aspect of Infinity War coming together and feeling as natural as it does is down to the writing, and I can only imagine the weeks of story-boarding this must have involved to position all the elements and characters where they needed to be. 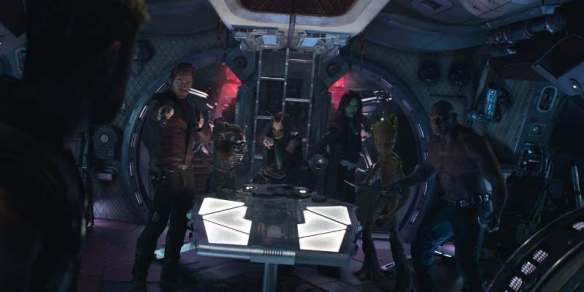 The real draw for even casual fans of the MCU has to be watching the various facets of the numerous mini-franchises within the cinematic universe all converge, and the long-awaited inter-plays that would result. How would the secretly insecure Peter Quill cope with the literally godlike Thor encroaching upon Gamora? What happens when the scientific mind of Tony Stark encounters the mystical wizardry of Dr. Strange? How hard will Rocket Raccoon try to steal Bucky’s arm? None of these disappoint, and neither do many of the minor comedic beats added to alleviate what is an otherwise often very serious story, though they do perhaps lessen some genuinely deep character moments, such as the eventual fates of Loki and Gamora, and the relationship between Wanda and Vision. 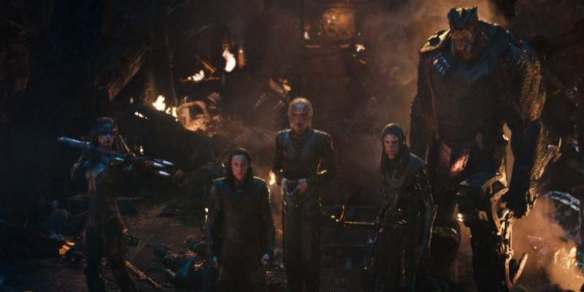 In fact there are very few mis-steps with the film as a whole. Thanos’ minions all have excellent names – Proxima Midnight, Corvus Glaive, Ebony Maw and Cull Obsidian – and visually come from a variety of evil alien henchpeople costume shops, but don’t have enough character behind them, especially when you consider one of them is played by Carrie Coon. Also, Ebony Maw seems way too powerful to just be Thanos’ minion; he handily takes on numerous heroes practically single-handed. Elsewhere Peter Dinklage hams his way through one of the worst performances the MCU has ever seen as the giant-dwarf Eitri, stomping and bellowing through his thankfully few scenes with nary a hint for anyone trying to enjoy the film. His appearance is during the segment on Nidavellir, the star-furnace used to create Thor’s hammer Mjolnir, and which is required to forge his new war axe, but first the star must be re-ignited. To do this Thor needs to re-couple two elements that have been destroyed, requiring him to be in the direct path of the star’s heat beam/laser thingy. I genuinely hate this segment. Not just because it brings us pantomime Dinklage, no, there’s also the asinine design of the foundry that requires a coupler to be in the path of a super-hot heat beam – no wonder the bloody thing is broken – and finally the fact that it’s just an arbitrary obstacle, a speed bump between Thor getting his hammer before he can face Thanos in a film already bursting at the scenes with action, which could have easily purged this one segment, especially as once Stormbreaker is built (and Groot Mk. II provides a limb to use as the handle) there’s no mention of this scene again, it’s just a case of Thor, Rocket and Groot heading to Earth for some alien-bashing fun-times. I’d somehow have been less irritated if Eitri had gone with them, wiping out hordes of beasties with his giant welded fist-clubs, before ultimately disintegrating into dust at the end, presumably immediately given the order of emotional importance the dustings occur in. 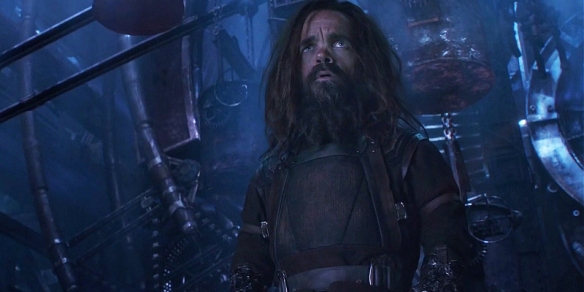 That’s actually my final concern with Infinity War; the ending. This is the first time we see the heroes we know lose at the end of a film, with their antagonist’s plan coming into full effect with the snap of his meaty mauve mitten-fillers and half of all life, including many of our lead characters, gradually disintegrating into piles of dust. My problem here is the same one that many have voiced, in that we absolutely know that the future slate of Marvel films includes some of the characters who post-snap could be thwarted by a Dustbuster, so it’s safe to assume these so-called deaths are very likely to be temporary. Whilst many other people don’t seem bothered by this, the last time I watched Infinity War I found myself detached from the dusting, as really what does it matter? Perhaps come Endgame the true ramifications will become more evident, but right now I’m more annoyed than distraught.

That being said, this is still a solid recommendation, but only for fans of the previous MCU saga. There’s too much going on and too many character back stories required to fully comprehend what’s going on here without at least a passing knowledge of the franchise so far. I’m absolutely here for Endgame, couldn’t be more excited, and if I weren’t going to a wedding this coming weekend I’d be seeing it opening night, but as it is I’ll be having near-total social media blackout until Tuesday afternoon, which is going to be torturous.

Here are Pax from Nerd Lunch’s thoughts on Avengers: Infinity War too:

This is it. The beginning of the end of the Marvel Cinematic Universe as we know it. What can I say, it’s been one helluva ride. I’m not sure I want this ride to end. 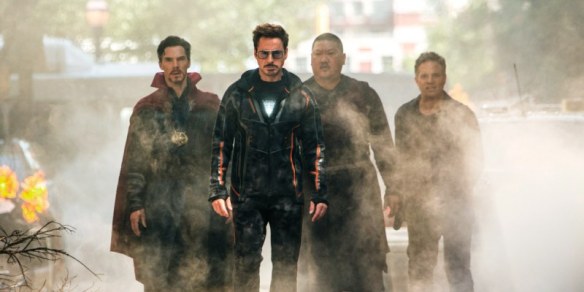 Anyway, so this movie is the setup while Endgame will be the knock down. The movie is based on one of my favorite crossover events, Infinity Gauntlet. And what this does is take what was great about that crossover and mold it perfectly to the current, existing MCU. I’m not surprised this movie is awesome because the Russos and Markus and McFeely have earned my absolute trust, but at the same time I’m surprised this movie worked at all because of all the modifications that had to be made to the original Infinity Gauntlet story. In that crossover event, the Silver Surfer is a huge part of the narrative. His history with Thanos is a building block of the whole plot. So is Thanos’ entire motivation for getting the Gauntlet in the first place but again, the writers I think gave him an even better motivation for this movie and deliver an unbelievably satisfying first part to a larger story. I’m not even sad the movie is essentially incomplete!

What else can I say. Everyone, hero wise, gets great moments in this movie. The villains are some of the best. I love Thanos. Brolin really grounds the Mad Titan. And Thanos’ Black Order are also awesome, I almost wish we could get a prequel movie of Thanos and the Black Order planning and then going to get the first Infinity Stone. And the ending. Wow, just, chilling. And yes, I know that many of these deaths will be reversed, but, for me, it doesn’t reduce the impact their deaths had onscreen. 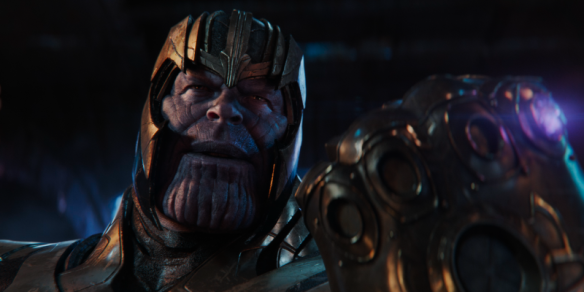 I’m not sure what else I can say about this movie that hasn’t already been said. This is the MCU’s magnum opus. At the end of this movie, everyone is left sort of how we as MCU fans will be after Endgame. Sort of dazed. A little shaken. Unsure of the future. But I’m confident that this universe and these heroes are in great hands.