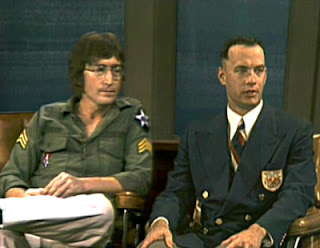 Forrest Gump is built on one man’s incredible journey through the key moments of recent American history, from landmark events like the Vietnam war and the Watergate scandal, to key figures of pop culture including Elvis Presley, John Lennon and several presidents. The seamless integration of Gump into archive footage subtly shows director Robert Zemeckis’ expansion on the technology he developed in Who Framed Roger Rabbit, and the soundtrack is suitable epic too, especially during the war sequences. As with most films I’m very familiar with, it’s the small touches I like the most, for example the way Gump’s eyes are shut in every photo he’s in, including the lifesize cardboard cutouts used for advertising ping pong bats. Also, the way Zemeckis makes life harder for himself is admirable, such as the shot panning up from [spoiler] Lt. Dan’s new prosthetic leg to his face could have been accomplished much more easily by simply cutting from the leg to his face, yet instead complex CGI is used to mimic the leg on Gary Sinise’s body. Tom Hanks is of course the heart and soul of the film, fully rounding his simple Gump with only admirable qualities, producing a truly heartbreaking performance at times.