In 1971, and following the deaths of her father and husband, Katharine Graham (Meryl Streep) found herself the de facto owner and publisher of The Washington Post, despite how little faith or respect her all-male team of advisers had for her. Meanwhile, the Post’s editor-in-chief, Ben Bradlee (Tom Hanks), fought to make the Post a relevant competitor to the more established national newspapers, and a lead on some illegally copied, highly classified government documents may be the key to making that happen.

END_OF_DOCUMENT_TOKEN_TO_BE_REPLACED

Brooklyn, 1957. British-Russian Rudolf Abel (Mark Rylance) is arrested and charged with being a Soviet spy. In order for him to receive a fair trial he is assigned a defence lawyer in the form of James B. Donovan (Tom Hanks). Donovan has no choice but to accept the case, despite it being a guaranteed lose for him – the judge already calls Abel “The Russian” and has no qualms with admitting he has decided Abel is a spy before the case has even begun – and the case also puts a strain on Donovan’s personal life, with his family being attacked and Donovan being shunned in public. Even the police who respond to the call from the attack threaten to fight Donovan, yet he continues and pursues the case even deeper. After the case is over, American pilot Francis Gary Powers (Austin Stowell) is shot down using a secret spy plane, photographing key areas of the Soviet Union. When Powers is imprisoned within the USSR, Donovan is once again called upon to resolve the situation.

END_OF_DOCUMENT_TOKEN_TO_BE_REPLACED

Richard Phillips (Tom Hanks) is the captain of the Maersk Alabama, a container ship heading around the Horn of Africa. En route they are set upon by four Somalian pirates, led by Muse (Barkhad Abdi). He and his cohorts are after money – more than the ship is carrying – and begin to search for the crew of the ship, who are hiding in the engine room whilst Phillips is held hostage on the bridge. END_OF_DOCUMENT_TOKEN_TO_BE_REPLACED

I had high hopes for this film. I’ll gladly watch Tom Hanks in anything (I didn’t even mind Larry Crowne that much), and it co-stars Shelley Long who, having starred in Cheers, must be good for something. Well, OK, maybe not high hopes, but some hopes that I’d enjoy this film, but alas even those hopes were too high. I understand now why ASDA were recently flogging this DVD for £3. It’s not that it’s a terribly bad film, it’s just confused, contrived and desperately unfunny, which considering it’s an 80s comedy, makes it something of a failure.
Hanks is Walter Fielding who, along with his partner Anna (Long), find themselves in desperate need of a place to live after a series of silly  and easily avoidable plot points. When they discover an astoundingly cheap yet extravagant mansion, they buy it with an almost reckless abandon, despite the inevitability of it collapsing upon them. Needless to say, everything that can go wrong with the house does.
My main problem with the film is that at no point did I feel sorry for the two leads. I’m a home-owner, and have had a fair few problems with my flat, but unlike Walter and Anna, I didn’t have a wealthy employer/ex-spouse or client who would pay for everything, as is what happens here. Other than having to live in a building site for an extended period of time, the two don’t really have any long term problems, other than each other.
Also, the film is decidedly short on laughs. There were some farcical moments – the bathtub falling through the floor and Hanks getting stuck in the floorboards – that were a bit humorous, but mostly the film tried too hard and came up with nothing. One sequence involved Hanks in a ridiculous chain reaction involving a moved plank, circular saw, pit of wet cement and collapsing scaffolding. The setup can be seen a mile away, and the scene offers almost no payoff. It looks like Walter is about to be ousted as a KKK member when a black builder spots him on the roof dressed head-to-toe in white and wearing a hood, but no, the cement all gets washed off in a fountain, so there isn’t even any chance for him to become a kind of living statue. So many opportunities were missed for greater comedy, and there’s very little else that sticks in my memory about the film.
When Joe Mantegna pops up as a building contractor my hopes picked up, but then he never came back again, so I was deprived of getting to watch Fat Tony as well as listen to him  Even if you’re a Hanks fan and have a desire to watch everything he’s been in I still wouldn’t recommend this film, as though he has great comic timing and can pratfall like the best of them, even he can’t make this film watchable. Avoid.
Choose life 3/10

There is a drinking game, the most disrespectful and coma-inducing that I’ve ever come across, where when watching Saving Private Ryan the players all drink a shot every time someone on screen dies. If one were to play this game, which I cannot advise for medical, moral and cinematic reasons, then I would recommend having 50-100 shots per player lined up ready and waiting for the opening 25 minutes of the film, as the much celebrated D-Day landing is a veritable cornucopia of fatalities, with soldiers coming a cropper as soon as the rear doors of the landing ships open, drowning in the water struggling with heavy packs, being carried to safety and every other way available.

This opening scene is a landmark in war movie history, recreating the sense of utter confusion and imminent death present at that time. With a shaking camera, dialogue lost to explosions and gunfire, men wandering around after lost limbs and a bloody tide lapping at fallen soldiers and shot fish alike, it’s almost a relief once the landing has finished and they can get on with the plot, as Tom Hank’s captain is ordered to find Private James Francis Ryan, last survivor of four brothers and location unknown after parachuting somewhere in France. With a cast positively brimming with stars and up-and-comers – Giovanni Ribisi, Matt Damon, Nathan Fillion, Jeremy Davies, Tom Sizemore, Edward Burns, Adam Goldberg, Paul Giamatti, Vin Diesel, Barry Pepper, Ted Danson, Bryan Cranston, Dennis Farina – no character is left without some characterisation, or providing an insight into a soldiers life, be it collecting dirt from every country they fight in, writing a novel about their experiences or making sure every German soldier they come across knows they have been bested by a Jew. 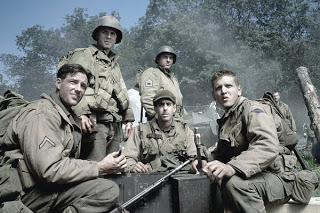 There are those that claim this is a long, boring film about walking, bookended by two of the greatest battle scenes in cinematic history, yet without the middle, where we truly understand the brotherly bond felt by soldiers fighting and dying together, would the closing battle – a much more personal, strategic affair than the opener, have such an impact? For my money this is Spielberg’s most cinematic film, showcasing his ability to show ordinary people in extraordinary situations, yet without losing the human touch.
Choose film 9/10

In 1969, man landed on the moon. This man was not Tom Hanks’ Jim Lovell, then first reserve for Neil Armstrong, but later he was given his own shat at the big floating wheel of cheese aboard the ill-fated Apollo 13. Hanks displays his greatest talent of evermanisation in this film, managing to make even an astronaut seem like a regular Joe, suffering from everyday concerns with young kids and a daughter dressing inappropriately on Halloween, coupled with the hours of arduous practice and training required for his profession and the worrying endured by the families left behind. Director Ron Howard evokes the feel of the late 60s well – the excitement of new scientific endeavours coupled with the period details, fashions, chain smoking and news reports, and Hanks is well supported by Gary Sinise, Bill Paxton and Kevin Bacon as his fellow astronauts, Ed Harris as the waistcoat wearing mission control and Kathleen Quinlan’s distraught wife, the latter of the two were Oscar nominated for their roles.
Choose film 8/10