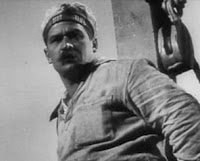 Famous for the pram rolling down a staircase, famously ‘homaged’ (stolen?) by Brian de Palma in the Untouchables and parodied in the Naked Gun series, Battleship Potemkin is a silent film about the crew of a Russian battleship who mutiny over the poor food, ultimately causing a mass revolution. There are certain images from the film that are more well known than the film itself – the meat crawling with maggots, the hordes of people mourning the death of a man “killed for a plate of soup” and of course the Odessa staircase scene, that the rest of the film is lost between these set pieces. I think that there are supposed to be parallels between the plot and the Russian revolution, but I’m afraid I don’t know my Russian history as well as is required to appreciate these, so this went over my head a little.
Choose Life. 5/10