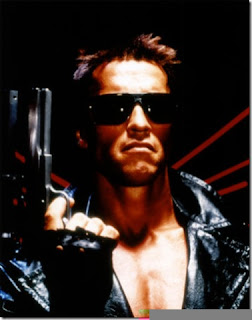 Film night strikes again with the Terminator. This is a film that is so deeply ingrained within popular culture that I cannot remember the first time that I saw it, and probably did not even realise it was my first time then, as the character is so well known, from the way he moves to his handful of lines of dialogue, but I tried to watch it afresh, as though it was 1984 and I’d wandered blindly into a cinema and sat down. The most surprising thing I found was that there is no indication that Schwarzenegger is a cyborg until about 45 minutes into the films, though it is now the most famous aspect of the film. Up until Kyle Reese (Michael Biehn) tells Sarah Connor (Linda Hamilton) that he is a robot sent from the future to kill her, preventing the birth of her son and therefore the revolution against the cyborgs that he will eventually cause, we only assume that Schwarzenegger is just a specially trained, seemingly unstoppable killer, possibly a soldier or hitman of some kind. Yes there are some hints; his stiff-legged walking and even stiffer speech mannerisms, but at the time no-one would have been expecting anything more acting-wise from the former bodybuilder.
It seems that not just the cyborgs are out to get Sarah either, in fact almost all the machinery in the film is on the brink of turning against humanity, from the police radio or answering machines that lead the terminator to her or the man complaining about his garbage truck in the opening scene, the robot uprising is already upon us. Occasionally the soundtrack jarred with the action though, particularly the awkward synth noises during the motorcycle/car chase, and the effects in places looked a little ropey, but at the time they were incredible, and I don’t intend to belittle them now.
This is a film you can be a fan of without even watching it, so iconic are the scenes, characters and lines that it is ranked up with Star Wars and Indiana Jones for the effect it has had on today’s culture. So if you haven’t seen it because you think you already have, make sure that you do, if only for one of the greatest dead-oh-wait-no-he’s-not bits in cinema history.
Choose Film. 9/10

2 thoughts on “The Terminator”