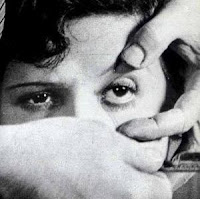 Alas, another Luis Bunuel film, however this time thankfully much shorter than L’Age d’Or.
One of the few things I have in common with Rachel Green from Friends is I have a thing about eyes. I don’t like people touching them, sticking things into them or anything like that. This has lessened since I’ve started wearing contact lenses, but still the infamous opening shot, of a man slitting open a woman’s eye with a razor, is entirely unnecessary, included merely for shock value and nothing else. The cut to a full moon being ‘slit’ by a thin passing cloud was well used, and I feel that should have been enough to imply to action of slitting, but I suppose without the shot, the film would not be as well known, and may not even appear on this list. The rest of the film is as much a senseless mish-mash as anything Bunuel and Dali have made, with ants crawling from an open wound, a disembodied hand being poked with a stick and a man dragging two pianos carrying dead horses and some strung up pilgrims, so nothing too weird this time. I’m not looking forward to the other Bunuel films on the list, that’s for certain.