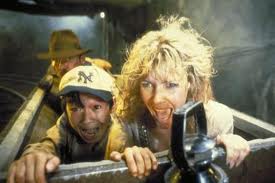 Within the Indiana Jones saga, each of the films has a specific role. Raiders is the leader, the well rounded, talented, good looking jock that everyone likes, admires and wants to be friends with. Crusade is the jokester, a tad immature, but loyal and loveable nonetheless. Skull is the one no-one wants to admit is in the gang, the sci-fi nerd with the stupid theories that tags along despite being the butt of all the jokes. And Temple takes life a bit more seriously, is a bit more intense, or so I’ve always remembered. When I’ve thought of it, I tend to remember the dark, mythological plot, involving sacred stones, voodoo, mass child kidnapping and slavery, yet upon rewatching I picked up on the lighter notes, the offsetting of this darkness with two of the series’ more comic (and irritating) supporting characters, various light-hearted moments (generally involving elephants) and a physics/logic defying rollercoaster minecart ride.

Although the film does offer some memorable moments, notably the bridge finale and the dinner scene (chilled monkey brains…), the too-shifting nature of the tone from humorous to sinister is too jarring, hindering the overall enjoyment of the film, and preventing it from reaching the dizzying heights of at least two of the other films in the series.

1 thought on “Indiana Jones and the Temple of Doom”