The central concept of the Truman Show, that a man (Jim Carrey, in one of his first reined in roles) is being unwittingly filmed every minute of his life for a reality TV show/, is genius, and on the surface appears well thought out. Round the clock feed is funded by blatant in-show product placement, the town of Seahaven where Truman lives is encased in a giant dome, complete with ocean, and almost everything in the show is set up to keep Truman satisfied with living there, from regular news bulletins and reminders from friends that they live in officially the greatest town in the world, to travel agents displaying posters of planes being struck by lightning, proclaiming “It could happen to you!” The shows creators have even created a fear of water in Truman, by having his father drown and making it Truman’s fault, but if you look closer there are some fairly major faults with the show. Firstly, it makes sense to give Truman’s best friend a menial job, as it requires little skill, but why make his wife a nurse? Surely it’s possible that she may need to see to someone in the presence of Truman, as shown when he goes to see her at work. This is also true of the coach-driving extra, unable to drive a coach, but the main issue here is why there is a coach station at all, when it’s never going to be used, and there not present in every town, even in the US. 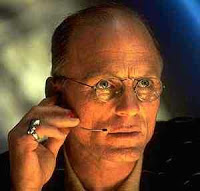 In terms of execution, the film doesn’t falter, utilising a wide variety of camera and shot angles to mimic a reality television format, and the scenes showing the viewers of the show discussing their favourite moments, how they keep it on at night for company, and the interview with ‘televisionary’ Christoph (Ed Harris) essentially playing God with someone’s life all adds to the overall effect. This raises the question of whether its right to do this to someone, locking them away for their entire life, but giving them a seemingly idyllic but fully controlled one instead. And if it were wrong, would that stop you from watching it? Its scary to think, but if this happened in real life, there would probably be more people glued to their television screens in fascination than there would be protesting.