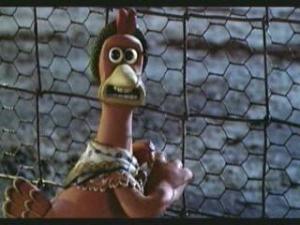 The Great Escape, with chickens! For Aardman’s first feature length picture, Nick Park and his team borrowed heavily from a British classic, with the Hilts-esque Ginger (Julia Sawalha) and her Scottish accomplice Mac (thankfully not shot up against the fences) leading a brood of chickens to freedom after their tyrannical farmers make a switch from eggs to chicken pies. The parallels run deep, from the multiple escape attempts using homemade and stolen tools to a heavy American influence courtesy of Mel Gibson’s circus cockerel Rocky Rhodes, although I very much doubt that this was based on a true story. Other elements, from a Flight of the Phoenix inspired mechanical plane to a Raiders style hat gag (by law, every film featuring a vertically closing door must feature the hero sliding under it to safety, before reaching back to retrieve their fallen hat) all add to the fun, but I was annoyed at the farmers complete lack of concern that, not only were their hens wearing hats and scarves, but one of them was wearing glasses. Timothy Spall and Phil Daniel’s east end spiv rats were excellent additions too.
Choose film 7/10