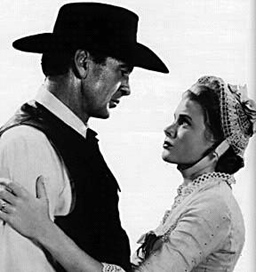 Some time ago, town marshal Will Kane (Gary Cooper, whose appearance in the credits alongside Grace Kelly should set Die Hard alarm bells ringing) sent a man named Frank Miller to prison. Now he’s being released and is on his way into town, set to arrive on the noon train, where he’ll meet up with his posse and have his vengeance upon the lawman that sent him down. Playing out in almost real time (as shown on the myriad of clocks shown in nearly every damn scene) this film builds the slow tension up to a dramatic climax as the marshal sets about gathering up a posse of his own to face the varmints when they arrive, but finds volunteers in short supply. Cooper is the epitome of the all American hero, out to protect his wife, his town and justice for all, regardless of whether anyone stands beside him. The ending is expected and almost spot-on but makes a mockery of the rest of the film, going against almost everything told before, but this otherwise perfect picture is a fine example of a classic western.
Choose film 7/10