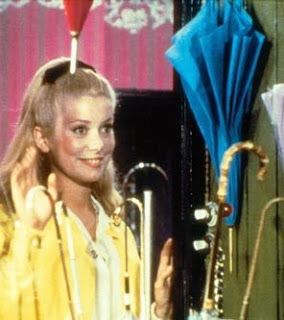 So you’ve written a fairly standard, almost boring script about a young man and woman in love, with many obstacles in their way in the likes of a failing umbrella shop, a disapproving mother, an ill aunt, a rival rich suitor and a war, hired two capable but not great leads, utilised a sickeningly candy-coloured colour scheme and obtained a soundtrack that sounds like someone is randomly sitting on a piano, but don’t know how to make it stand out from the slew of identical dramadies? Well why not make the cast sing every line of dialogue? Every. Damn. Line. My God this is intolerable. I’m all for musicals occasionally breaking into song in ways that are integral to the plot, well written or just entertaining, but please stop for the occasional conversation. It may have worked on paper, but as soon as someone sings a response of “Yeeeeeeeeeeeeees” I wanted to throw a slipper at the screen.
Choose life 3/10

1 thought on “The Umbrellas of Cherbourg”