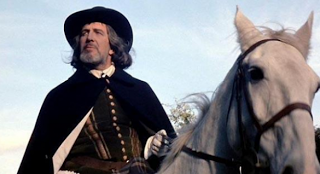 Can a poor accent really spoil a film? Vincent Price, here playing England’s witchfinder general during the English Civil War, doesn’t even attempt a Limey tone, an oversight so distracting it mars the rest of the film. Other than this detail his performance is spot-on as the man bought in to rid villages of accused witches for a princely sum, owning every scene he’s in as he accuses all those in his way of being in league with the devil. When he confronts the accused Satanist uncle of a soldier’s wife, brutally torturing, half-drowning and hanging the poor priest, the soldier sets out to wreck vengeance upon him. The film is at times maddening at what is hoped to be fictionalised accounts of what was gotten up to back then – see the look of mirth upon the face of a torturer when he spies a colleague raping the soldier’s wife, and methods of proving witchcraft include continually stabbing a person until finding a spot that neither bleeds or causes pain, so this isn’t always the easiest film to watch. But get past the gore and inaccurate inflections and what lies beneath is a gripping look at 17th Century brutality.