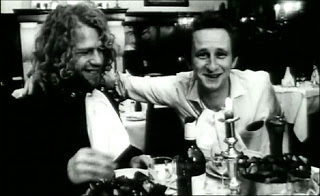 This sublime pitch blackly-comic mock documentary shows an amateur film crew creating a documentary on Ben (Benoit Poelvoorde, Coco Before Chanel), a man who lives day to day by killing people and stealing their money. Beginning with watching him kill a woman on a train with piano wire, we see several cold-blooded murders throughout the film, and hear Ben discuss the best way to dispose of the bodies – sinking them in a lake – and how much ballast should be used for a body, and how the ratio changes when sinking a woman, a child, an old person or a midget. Once you look past the absurdity of creating such a documentation this is at times hysterical – the film crew being used to distract victims to allow an easier murder – and elsewhere truly disturbing (upon interrupting a couple having sex, Ben and the crew take turns to rape the woman before killing them). The execution of the film is perfect in regard to amateur film-making techniques; dialogue gradually becomes more audible as the mic operator approaches, the cameraman bumps into things in poor lighting conditions. This rigorous maintaining of the method is also the film’s biggest downfall though, as some scenes that would have been interesting to see are left out as the crew would not have had access.
Choose film 8/10