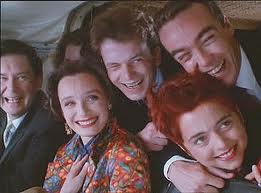 Richard Curtis and Hugh Grant seem to be a match made in heaven. So far they’ve collaborated on three features (Notting Hill and Love, Actually being the other, equally enjoyable films that, for some reason or another, aren’t on the List), and Grant’s lovably foppish dithering perfectly fits into Curtis’ skill with a subtle put-down or throwaway comment.
Here, Grant plays Charles, terminally lost amidst a sea of acquaintances tying the knot, swinging from one wedding to the next seemingly every weekend. Perpetually late, lost and underprepared, Charles is a creation that, if you don’t know someone just like him, it’s probably you in your circle of friends. And it is this circle, just like in Notting Hill, that makes the film what it is. The supporting characters in any film have the potential to be more layered and interesting than the audience ciphers required as the leads. If need be they can even be people you don’t overly like or agree with, but fortunately here they’re a wonderful bunch, from Kristin Scott Thomas’ heartbreakingly brittle Fiona, John Hannah’s dependable Matthew, Simon Callow’s enigmatic, irascible Gareth and of course James Fleet’s hopelessly wealthy Tom, who trumps Charles for the worst best man come wedding number 3 (sample speech quote: “When Bernard told me he was getting engaged to Lydia, I congratulated him because all his other girlfriends were such complete dogs. Although may I say how delighted we are to have so many of them here today”).

Often hilarious and at times genuinely touching, not the least in Matthew’s moving elegy at the titular funeral, the script is also so much swearier than you remember (“fuck fuckety-fuck”), and deals with all the problems one might encounter at a wedding – drunken bride, boorish guests, horrendous dresses, improbable hats and inappropriate songs (I Will Survive, at a wedding?) as well as the more unusual scenarios, like being sat at a table full of your former partners, or being trapped in the room the happy couple are consummating their vows in.
The only problems occur are the horrendously cliché rain-soaked finale (“Is it still raining? I hadn’t noticed”) and the casting of Andie MacDowell as Charles’ American dream girl, who is only actually desirable the less he gets to know her in my opinion.
Choose film 7/10