Regardless of whether you know the story of Homer’s Iliad, it’s a certainty that you know of the expressions Helen of Troy, Achilles’ Heel and The Trojan Horse. These plot points have become more than the legend of which they are a part, and have entered the modern lexicon as sayings and day-to-day phrases. They aren’t anything new, you know what is means and have heard them a million times before, and the same can be said for every aspect of this film.
Normally I don’t like to bring pre-existing prejudices into films, but the only feelings I had before watching Troy were negative. Some years ago I was on a flight, I think to America as it was a pretty long one, and on said flight I was fortunate enough to have a little screen in the seat in front of me, upon which I could watch whatever films I liked, from their fairly broad selection. I can’t remember what I watched, but in an 8-hour(ish) flight, I think I only completed 3 films, and the reason for this is Troy. For you see, the films were played in a loop, all starting at the same time for everyone, so if you watched a 90-minute comedy, the next film wouldn’t start until the 163-minute swords and sandals epic has finished, leaving me with 73 minutes to kill. I don’t know about you, but I simply refuse to start watching a film a little way into it, so I think I ended up watching some old episodes of a crappy sitcom. So, before even watching Troy, I already hate it, but it did have some attempts at redeeming itself. 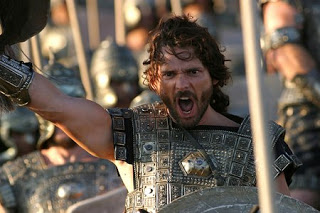 Firstly, the cast is stellar. Peter O’Toole is God-fearing King Priam of Troy, with sons Hector (Eric Bana) and Paris (Orlando Bloom). Paris is in love with Helen (Diane Kruger), who alas is married to Menelaus of Sparta (Brendan Gleeson). When Helen flees to Troy with Paris, Melelaus recruits his brother Agamemnon (Brian Cox), who wages war on Troy. Among Agamemnon’s forces are King Odysseus of Ithica (Sean Bean) and the seemingly invincible Achilles (Brad Pitt), and inside Troy’s impenetrable wars are, among others, Hector’s wife Andromache (Saffron Burrows) and his cousin Briseis (Rose Byrne). That’s a pretty great cast, but along with many other elements of the film it feels a little too pre-planned by a studio intent more on making money than creating art. It’s clear Troy was a response to the likes of Gladiator and The Lord of The Rings; huge-scale epics on foreign lands, with copious amounts of battle scenes and chariots laden with blood, but more time has been spent on working out the exact cut of a tunic to reveal just the right amount of gleaming torso than on whether the overly famous fable can make a decent enough, gripping story.

My usual comparison to this problem is Titanic. Going in, everyone knew that the boat was going down, yet people still flocked to the cinemas in droves for two reasons; the spectacle and the sub-plot. New elements were added to an existing story, making audiences care about the fates of Jack and Rose, and to see how impressive James Cameron’s vision of a 1912 ocean liner being viciously assaulted by a giant block of ice would look on the big screen. The spectacles of Troy are no less great – the multiple battle scenes featuring hundreds of boats and thousands of fighters are nothing less than astounding – but there are no new elements to the story to really grab the attention. You know at some point the Trojans will wake up one morning with a shiny wooden horse outside their gates, that the leaders of Troy will blindly drag it in, and later Spartans will swarm out and kill everyone they find. It’s also no great surprise that eventually Brad Pitt’s Achilles is going to have something sharp thrust just below his ankle, and everything up until that point is just ticking off the boxes to arrange a setup.

It doesn’t help things that there’s only really one location for most of the film, in and around Troy. For a grand, sweeping epic I’d like to see different varieties of battle, fought over various styles of landscape. I know they were restricted by the original story, which is why I don’t think this should have been made into a film. There’s only so many times I can see some blokes having a scrap on a beach before I get bored.

Most of the performances are about average for this kind of big, brash movie, and I found the mix of accents amusing, as the blend of English, American, Scottish and Australian cast (and German director Wolfgang Petersen) all seem to use their native accents. Brad Pitt has possibly the hardest job amongst the cast, as Achilles is required at different times to be a villain and a good guy, depending on who else is on screen. To Bana’s Hector he is an adversary, intent on slaying his people for the sake of glory and vengeance, whilst to Cox’s Agamemnon Achilles is the good guy, the perfect warrior hero forced to fight against his will. Pitt does his best in the role, and he’s excellent choice for being the wench-shagging, much-idolised perfect warrior, but as Troy’s key adversary he stumbles. Personally I think Jason Statham could have been a more interesting choice for the role, but he would have had much less of a box office draw at the time.

Whenever Hector’s offscreen, for most of the second half of the film, I’m not sure who to root for. Is it Bloom’s Paris, a cuckolding coward, or Pitt’s dickish brute. Thank the Gods for Cox’s outright merriment at being a scenery-chewing bad guy, revelling in the bloodshed as Paris takes on Menelaus in a one-on-one battle for the right to Helen’s heart.

Such a well-known story should be more entertaining to watch, but alas there’s far too much dialogue-heavy exposition scenes. At one point Odysseus tells Achilles that “War is young men dying and old men talking; ignore the politics.” This would be much easier to do if we weren’t shown it every other scene.

Achilles’ taking of the Trojan beach with just 50 other men is impressively choreographed and suitably balletic, but the ‘clak’ of wooden spears doesn’t sound impressive, more like morris dancing. The sense of inevitability also leads to a tragic let-down, as the Trojan Horse is wheeled out to severe disappointment on my half. The whole scene should be something of a highlight, yet I couldn’t get past the horse’s weirdly-shaped head, and the whole thing felt a little rushed and underplayed.

As with many films I’ve written about, this film is OK, but has far too many other films of a similar type that are superior in almost every way. A great cast has been wasted in a film that is at best average.