Lord Dashwood (Tom Wilkinson) passes away and, unable to split his vast estate between his two families, his wife and three daughters are ousted from their palatial mansion by their half-brother John (James Fleet) and his vile wife Fanny (Harriet Walter), and are forced to considerably downsize their opulent lifestyles. Hope, it seems, arrives in the forms of Fanny’s reserved brother Edward (Hugh Grant) and the dashing Mr. Willoughby (Greg Wise), who each take a shining to two of the Dashwood sisters (Emma Thompson and Kate Winslet).
For my sins, I’ve never read a Jane Austen novel. My girlfriend has a boxset and tells me they are somewhat difficult to both understand and enjoy, but one day I fully intend to at least give it a go. This allowed me to enter into this film knowing literally nothing of the plot, which on occasion can be a refreshing way to watch a film, but I fear it may ruin my eventual reading of the book (though chances are it won’t be for at least 10 years or so, I’ve got a lot of books to read). Nor, for that matter, have I ever seen an Austen adaptation, for what little I know of the subject matter – up class folks swanning around in bonnets and corsets, fanning one another and fainting onto conveniently placed chaise longues when a letter arrives two days late – has never greatly appealed to me. It was therefore with great interest and expectation that I watched this film, in the hope that I could see what all the fuss was about, Austen-wise. 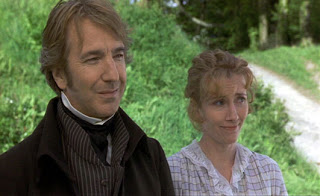 Directed by Ang Lee, this is a sumptuous adaptation, with the greatest attention to period details. The costumes and locations are wonderful, the rolling Devonshire hillsides resplendent with herds of sheep. Some of the headwear is a little distracting, as indeed are Colonel Brandon’s (Alan Rickman) bouffant hair-do and Mr. Willoughby’s razor-point sideburns. Of the seven Oscars the film was nominated for (including actress and supporting actress for Thompson and Winslet, costume, picture, music and cinematography) it was only Thompson who won for the adapted screenplay. This was thoroughly deserved, as there is a great deal of plot to squeeze into 130 minutes, yet at no point are you left floundering amongst the many characters. Certain scenes are delightfully complicated, where one must remember exactly how much of each story each character knows to fully comprehend just how awkward the situation must be for some.
For the most part the film is horribly depressing. The two main sisters, Elinor and Marianne, seem completely incapable of falling for a man who is not elsewhere betrothed, and Marianne’s affections in particular seem to fall to whomever last saved her from a rainstorm. There were many occasions when I suspected a character was only moments away from committing suicide, so fed up were they of the turn their life had taken, and somebody really needs to sit down with the youngest Dashwood sister Margaret (Emilie Francois) and explain to her how much misery her surname has promised her. 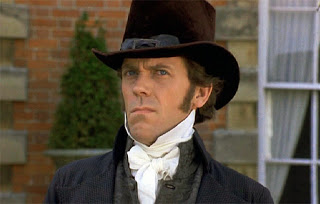 The performances are note-perfect from everyone involved, particularly Thompson, who has the unenviable task of retaining the stiffest of upper lips throughout the harshest of adverse conditions, yet still portraying a torrent of inner turmoil beneath. Once her outer facade cracks and the wall comes down, the aftermath is a sight to see. Winslet is also good as the romantic, headstrong young Marianne, and amongst the supporting cast Hugh Laurie shines as the irascible Mr. Palmer. The characters are well rounded and mostly believable – though Willoughby is almost a parody of the knight-in-shining-armour types, riding through a storm to save Marianne, yet being every part the gentleman, keeping Shakespeare’s sonnets about his person at all time and refusing the offer of a chair for fear of leaving a damp patch.
“We never talk about things,” young Margaret is heard to say at one point, and she is so very correct, as the air of repressed feelings and not discussing coarse matters, even with those closest to you, is keenly felt. Many situations arise from a lack of communication or a swearing to secrecy, even if the secret-keeper’s life is ruined ever further because of it, and if people had dropped the formality and just used first names back then instead of insisting of calling people Mr. this or Miss that there’d have been far less confusion all round.
As with any film featuring Alan Rickman, I couldn’t help but think I’d rather be watching Die Hard. Separated by only 6 years within his career, the films could not be more different, yet I found myself to enjoy this one far more than I thought I would. I think this may be the only Austen adap on the List (sorry ladies, no Mr. Darcy), which is a shame, but rest assured I am now looking forward to reading the books.
Choose film 7/10

2 thoughts on “Sense and Sensibility”