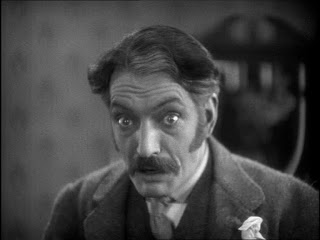 In the late 1920s, having just wedded Alma Reville, marriage was clearly at the forefront of Alfred Hitchcock’s mind as he adapted this play be Eden Phillpotts about a farmer who, after the passing of his wife and the marriage of his daughter, seeks to find a new wife within the small group of eligible women within his village. Farmer Samuel Sweetland (Jameson Thomas) is by and large a good man, though he has difficulty in expressing himself, often fails to see what is directly in front of him and has a heightened ego. Still, he means well. After his wife’s death, in which her last words are reminding the maid (Lillian Hall-Davis, returning from The Ring) to air out her master’s pants, Minta the maid takes over all of the wife’s duties as well as her own. Once the farmer’s daughter has been given away, Minta is given one more job to do, help Sweetland find a wife, so the two of them sit down and make a list of the four potential candidates.

This being a comedy, things inevitably do not go to plan, mainly due to Sweetland’s pomposity and the various faults of the women. It probably didn’t help that his first proposal attempt involved calling his prospective fiance a fat hen, and that he announces that he is getting married, before actually asking if she is OK with the situation. The script is full of mild – and not so mild – put downs, largely aimed at the women (“Her back view’s not a day over 30.” “But you have to live with her front view.” “I don’t mind pillowy women, so long as they be pillowy in the right places.”). Elsewhere, the film featured possibly my favourite title card from a silent film ever, with the completely unexpected line “You are the first man who has accepted my sex challenge,” made all the more hilarious by the frail, demure woman who utters it.

As the farmer, Jameson Thomas has mastered the art of looking flustered with wide-eyed rage and exasperation, although at times I felt he was just as likely to strangle some of the women as propose to them, not helped by his Snidely Whiplash moustache and sneer. I can’t help thinking the women who turned him down were lucky not to wake up tied to the train tracks. I felt the film seemed to lose it’s way a little later on, and the ending is clearly signposted within the first 15 minutes, but is done so sweetly that you really don’t mind, and the overall theme of the plot reminded me of Keaton’s Seven Chances, which similarly involves a largely unsuccessful attempt at finding a wife, but for different reasons entirely. The handyman, Mr. Ash (Gordon Harker) gets the short end of the stick comedically, having to endure a series of pratfalls, mostly involving oversized trousers, but this doesn’t detract from the film too much. These may have been an attempt to distance the film from the largely dialogue-based play, as is the case with a climactic fox hunt that would have been almost impossible to perform on a stage.

This was far more enjoyable, and funnier, than I was expecting. If you don’t mind silent comedies, and I’m learning that I don’t, then this isn’t a must-see, but is enjoyable if you can find it.

6 thoughts on “The Farmer’s Wife”