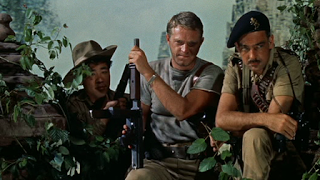 A Steve McQueen film set during World War 2 where at one point he talks about brewing his own alcohol? No, sadly I’ve not yet reached The Great Escape (one of my consistently top 5 films of all time), I’m onto Never So Few, the Frank Sinatra-starring final obstacle before I get to watch The Magnificent Seven again, when I’ll actually start to enjoy going through all of Steve McQueen’s films.

Never So Few sees Sinatra as Captain Tom Reynolds in North Burma during the Second World War. He and his band of highly trained men, including Peter Lawford’s be-monocled Captain Grey Travis and Charles Bronson’s Seargeant Danforth, are training the native Kachins to defend their land against their attackers, but the hardships of jungle warfare and the difficulties posed by his commanding officers – particularly the lack of an assigned doctor in his troop – begin to weigh on Reynolds.

Whilst on a short trip back to headquarters, followed by a two week adjourn for the two captains, Reynolds falls in love with Carla (Gina Lollobrigida), a voluptuously alluring partner to a foreign dignitary, and he also uncovers the beginnings of a plot that may or may not involve his superiors being in cahoots with their Chinese enemies. They also meet Bill Ringa (Steve McQueen), the resourceful driver for their Colonel, and soon recruit him to join their squad. 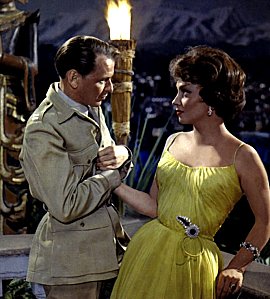 This film has some serious tone issues. Director John Sturges, yes of The Great Escape and The Magnificent Seven, cannot seem to decide whether he is making a war film – as I initially expected – a romance or a political thriller, as all three elements share roughly equal screen time, and the transition from one to another is often jarring. Styles change when Reynolds walks into a room, leaving the government corruption plot as the music swells to a bad daytime soap opera sweeping score as Carla rushes into his arms for a longing embrace. The three different elements seem only loosely tied together too – it could be justified as to having the war and conspiracy themes, as the subjects are at least related, but the romance could quite easily be lifted without affecting the other two, so tacked on is the feel. This was clearly added just to try and entice female viewers – or possibly more men with Lollobrigida’s Jessica Rabbit-like curves – but it always feels awkward and out of place with the rest of the film, just like Carla’s Spock-like eyebrows.

Speaking of tagged on, McQueen’s character is fairly superfluous too, other than adding someone engaging to watch and a mildly interesting character – plus a somewhat inventive fighting technique early on. I got the feeling that Sturges wanted to include McQueen in the film somewhere, and who can blame him? By this point McQueen had perfected the art of ‘doing something in the background’ when he wasn’t overly important in a scene, hence why he always managed to retain your focus by swatting a mosquito on his neck or playing with his gun, regardless of whether you should be looking at him or not. Sinatra’s Reynolds also has an amusing if distracting penchant for pithy one-liners that don’t necessarily make much sense (“He speaks English like he hates it.” “Inside my mouth tastes like the outside of a crocodile.”) or bizarrely successful seduction techniques in which he discusses the correct use of the word ‘hanker’. Some of the lines are great (“I’ll miss you; where I’m going nobody smells of soap”) whereas others raised a chuckle but would be worthy of a slap in real life (“I’ll be back; learn to cook.”). He also wears a cowboy hat whilst parachuting, which is only something Slim Pickens is allowed to do.

I loved Charles Bronson in the film, though his role is far too short. When his gun runs out of bullets during a Chinese attack on the camp, without hesitating he picks up a table and takes out three men with that instead. Genius. Look out for a young George Takei as a head-bandaged hospital patient complaining about the food and James Hong as a diplomat fairly late on. You may be as astounded as me to learn that Hong currently has 371 acting credits to his name, as diverse as Blade Runner to Kung Fu Panda, Airplane! to Chinatown. The guy’s been in everything.

The plot involves far too many talky scenes for a war film, with not enough actual fighting, despite a not-bad mid-film set piece involving the attack of a Chinese air base using hundreds on cans of gasoline, and a third act counterattack over the Chinese border. In spite of these, the film comes off as boring and overlong – 125 minutes – and the actual backbone of the conspiracy plot is almost impossible to fully comprehend. I’m still not entirely sure what was going on for most of it.

3 thoughts on “Never So Few”