Iris Murdoch (Judi Dench), the celebrated British author, is writing her 26th, and ultimately last, novel, Jackson’s Dilemma, when she begins to experience the symptoms of Alzheimer’s disease. Her husband, John Bayley (Jim Broadbent), always the less dominant half of the couple, struggles to cope with the situation and care for his wife. Meanwhile, we see the beginnings of their relationship, as their younger selves (Kate Winslet and Hugh Bonneville) meet as students at Oxford University whilst she attempts to get her first novel published.


As soon as I realised that this, the latest Kate Winslet film in my journey though her career, was not only a Winslet film, and therefore likely to be somewhat depressing, but also dealt with Alzheimer’s disease, I must admit I sighed a little. I firmly planted my heels, clenched my jaw and braced myself for a never ending torrent of sadness and despair. As it turns out, Iris isn’t as depressing as I’d anticipated, but it’s still a long way from being a laugh riot. The lighter moments are mainly courtesy of the flashback scenes regarding a budding relationship, but there are some happier moments in the older scenes as well, particularly towards the start of the film. Iris and John’s rambling conversations (“Mae West… my vest! I tore my vest this morning!”) are a delight, as is the loving relationship that has formed between these two old friends. Once Iris’ illness takes an increasing firmer grip upon her though, the dark places are not shied away from. 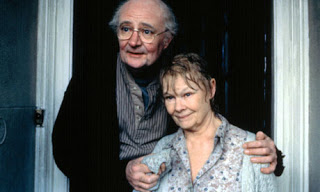 Whilst Dench and Winslet are good in their roles – it is entirely plausible that Winslet’s outspoken, forward, confident young writer could one day mature into Dench’s more considered, stubborn novelist – it is Jim Broadbent who really stands out. Both women were nominated for academy awards, but it was Broadbent who won for his supporting role. Some may say that Ben Kingsley was more deserving for his unhinged, antagonistic performance in Sexy Beast, but personally I think Broadbent’s victory was fully justified. Initially he is the more absent-minded, forgetful, weaker link in his relationship with Iris, and it wouldn’t come as a surprise to discover that he was the one with the debilitating mental illness. Eventually, as her memory deteriorates so does his patience, which leads to hopelessness, confusion and outbursts of rage at the situation he was never prepared to deal with.  Bonneville fits the part as a younger Broadbent, but at times he felt more like a Harry Enfield sketch character.

There is some nice editing on display – Iris and John’s first sexual encounter and a skinny-dipping adventure cuts to the older John’s explosion of frustration at his wife’s condition – but at the start of the film I felt there was too much to-ing and fro-ing between the two narratives, with the scenes not being quite long enough to have anything to hang on to. There also wasn’t enough correlation between the two time periods, with the only payoff strand being John’s initial hesitation and concern at the idea of forming a relationship with Iris. Fortunately the scene lengths increased as the film progressed, which worked better for me.

Penelope Wilton, otherwise known as Shaun’s Mum from Shaun of the Dead, plays Janet, a friend of Iris’. She is good, but I’ve always seen her as being quite similar to my own mother, especially in The Best Exotic Marigold Hotel, so seeing her topless in the shower was somewhat disconcerting. Ultimately the most distressing aspect though was watching Dench’s deterioration, seeing someone who not only loved words, but needed them to enjoy life and was renowned for her exactness with them (“Without words, how do you think?”) gradually losing her grip on them, until all she can do is continually repeat the last thing her husband said to her.

I’ve been fortunate enough to have never experienced someone close to me suffering in a similar way, but my girlfriend informs me that watching a film based on the subject matter, or at least watching this one, cut a little too close to the bone for her liking. Whilst it educated me on the life of a celebrated novelist I had otherwise barely heard of, and with performances that are beyond comparison, I cannot overly recommend this film due to it’s depressing storyline and some narrative difficulties.