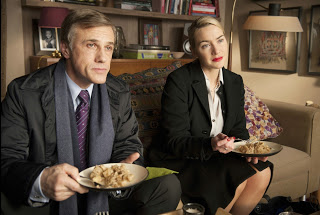 After their sons have an altercation in the park, their parents get together to settle the matter over coffee and cobbler. Just as the Cowans (Kate Wisnlet and Christoph Waltz), the parents of the fight’s assailant, are leaving the Longstreet’s (Jodie Foster and John C. Reilly) apartment, they end up being drawn together for the rest of the evening under various circumstances, be it phone calls, not wishing to upset the neighbours by arguing outside or one of the party throwing up everywhere. Tempers fray, bonds are formed and broken, alcohol is drunk and all politeness and civility is thrown out the window.


I’d been looking forward to seeing this film, but I missed it in cinemas when it wasn’t out for very long near me. I’m glad now that I didn’t see it in cinemas, as its only 76 minutes long and isn’t all that cinematic, seeing as the entire film, other than bookends featuring the kids in question, is set entirely within the Longstreet’s apartment, and for the most part sees the four leads arguing with one another at an ever increasing rate and intensity.

In my opinion, a better name for this film would have been Four Angry Parents, what with the single location, real time play out and minimal, aggravated cast. How Twelve Angry Men is so very much better though is partly the direction, ratcheting up the tension and oppression of the atmosphere by manipulating the camera angles, sets and temperature, and partly the script, which came to a satisfying conclusion. Although Carnage does have some interesting ideas and mixes up the shot styles and lengths, it cannot escape the fact that it’s all in one location and it can’t cut away to somewhere else, seeing as the furthest place it can cut to from the lounge is the bathroom. And instead of a neatly wrapped up conclusion, I was put in mind of a writer (Yasmina Reza) not knowing how to finish a nice idea for a story, seeing as the film’s end came all too abruptly, and I’d quite like to know how it all would have ended too. I’m all for open-ended or ambiguous endings, but I felt that didn’t really suit this kind of story. 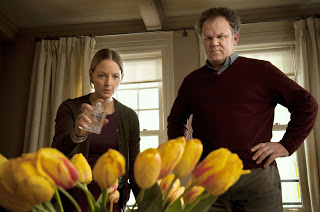 The four actors, essentially all that worked on the film other than a few voices during phone calls and the kids at the start, are all great at what they’re doing, and have all inhabited their characters as much as you could ask. They all have their faults, be it pride, temper, tolerance, rudeness or simply a dicky tummy, but they all have their good points too, and they all come out through the hour and a quarter they’re on screen discussing their families, recipes, parenting techniques, jobs etc. I always felt sorry for John C. Reilly during the film’s marketing too, as the rest of the cast were all billed as being Academy Award winning, but he’s only been nominated, and they made a point of mentioning this in every piece of advertising I saw.

So whilst the acting is great and the premise could have worked well, unfortunately the material and conclusion weren’t satisfactory enough to keep me entertained. And all the best parts were given away in the trailer, which gave watching the film a connecting the dots feeling. This is a great film to watch, however, if you want to have an argument, as after sitting through it my girlfriend and I both felt very confrontational, which I suppose is what happens when you watch four people ripping verbal chunks from one another for 76 minutes.