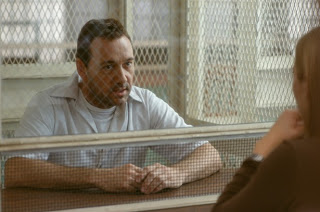 David Gale (Kevin Spacey) used to have it all. He was the Head of Philosophy at Austin University, an acclaimed writer with a wife and son (with some dinosaur pyjamas I’m more than slightly jealous of), co-director of Death Watch a group against the death penalty, and he had the moral standing to turn down the advances of a nubile young student out for an easy A (Rhona Mitra). Now, however, he’s in jail, about to be condemned with the very punishment he’s spent his life protesting against, having been convicted of the rape and murder of his friend, colleague and fellow protester, Constance Harroway (Laura Linney). Three days before his scheduled execution, Gale requests three interviews with ambitious yet unfortunately named magazine journalist Bitsey Bloom (Kate Winslet), to whom he tells his story in the hope that she will believe him, and discover whoever is behind his supposed framing for the crime he says he didn’t commit. 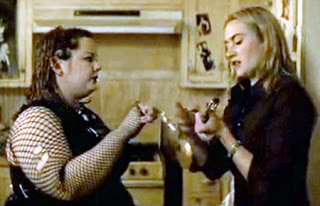 Rape. Capital punishment. Melissa McCarthy dressed as a goth. I’ve now officially given up all hope that I’m going to enjoy any Kate Winslet film that I haven’t seen before. And don’t even get me started on the fact that I’ve got to at some point watch Movie 43. I’ve read the reviews, and I flat out refuse to pay money to see something in the cinema that’s making a valiant effort to achieve a negative grade on Rotten Tomatoes. In the case of The Life of David Gale, I was slightly concerned that I’d never even heard of the film before compiling Winslet’s list, especially when you consider that she, Kevin Spacey and Laura Linney are all reputable names, which led me to believe they may have made some joint effort to bury this amongst their CVs. Well, whilst this certainly wasn’t a great film, it wasn’t quite as bad as I’d initially anticipated.
For a start, the acting is pretty good, but then with a cast like Spacey, Winslet and Linney, what exactly were you expecting? Linney especially is brilliant in the flashbacks of Gale’s life before the crime, and there’s some nicely filled supporting players like Leon Rippy as Gale’s attorney and Matt Craven as a mysterious cowboy who seems to be stalking Bitsey. The cast is, however, let down by Gabriel Mann as Winslet’s intern assistant Zack Stemmons, who does his best but just comes off as incessantly whiny and annoying. Regardless of Mann, I was kept fairly riveted until the end of the film, as I was intrigued as to how exactly it would play out, even though it was clear from the very outset that there were only two possible outcomes. 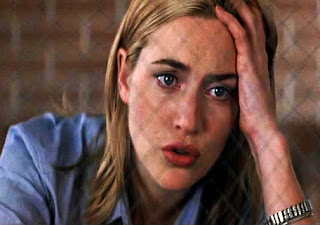 And so we come to my main problem with the film, the beginning. It’s never a good thing when the start of a film draws an eye roll from the viewer, but if you begin with a sequence in which your heroine pleads in desperation with a faltering automobile that just will not start, before anxiously checking her watch, evacuating the vehicle and running full tilt whilst carrying an important-looking document of some kind, then dammit I’m going to be frustrated with you. Such a set-up; a preview of the film’s climax, can only mean that Winslet’s dogged reporter has discovered some vital yet never before seen scrap of evidence that will surely lead to the release of her subject, yet she’s found it mere moments away from his execution, so must race against time to place the proof in the hands of those in charge of the chair, syringe, guillotine or whatever implement of early demise the good state of Texas was using at that time. By sheer Hollywood law she’ll either arrive with seconds to spare or far too late, and this is the only real unknown, other than the evidence she has discovered, making everything else a build-up for this inevitable conclusion. What this does mean is that the film isn’t necessarily about whether Gale can convince Bitsey that he’s innocent or not, when he clearly does by the opening. Instead, this is a film about why. Why is he in prison? If he committed the crime, why did he do it, and if he didn’t, then why is there such an orgy of evidence indicating to the contrary. Whilst this took the film in a direction I hadn’t necessarily expected, I didn’t really mind all that much.
What I did mind, however, is the tone of the film, which is beyond preaching. This film takes a firm stand against the death penalty, and isn’t afraid to shout about it. Regardless of my own feelings for it, this film is prepared to go to great lengths to pull you on side in agreement come the credits. Rather than letting the viewer make up their own mind, an opinion is forcibly injected into your veins and rammed down your freshly guillotined throat.
The way the film has been put together isn’t great either. In fact, it’s headache-inducingly sloppy, with too many fast-edit cuts, rotating cameras and flashing adjectives used by the media to describe Gale, giving the film the appearance of something edited in PowerPoint. Also, for most of the story I had assumed it was based on real life events, as the subject matter seemed realistic enough to be the case, but there were some end-of-Argo-like moments that, were this actually a true story, seemed hastily tacked on in an effort to increase the dramatic tension. As it turns out, these moments of annoyance were undeserved, as the plot is, I believe, entirely fabricated, but even so what initially seemed like an engaging and realistic account of a plausible tale became unbearable when a pet peeve of mine reared it’s ugly head when a car chase was interrupted by a speeding train blocking the path of the chaser.
Choose life 5/10

4 thoughts on “The Life of David Gale”