Mr. Hornblower (Edmund Gwenn) has just purchased a rented house from Mr. Hillcrist, under the circumstance that the former does not evict the long-standing tenants of the house, the Jacksons (Herbert Ross and Dora Gregory). However, as soon as Hornblower has bought the place the Jacksons find themselves homeless, which starts a familial war, or ‘skin game’ between the two families.
I’ll be honest, with a title like The Skin Game I was expecting this to be about porn. Or possibly football. I’m glad that I was wrong on both counts, but when I discovered the direction the plot of this early Hitchcock talkie was taking I had expected it to be far more comedic. Hitch is known for his comedic side, and the bare bones of the plot reminded me of Buster Keaton’s Our Hospitality, in that both revolve around warring families, but what we have here is a straight up drama piece, which I feel I would have appreciated more had that been more in line with my comedic expectations. There was a great deal of comedy potential, especially when you consider that the Hillcrists are a clan of snobbish types whose fortune has come from a long lineage of similar snobs, whereas Hornblower is a self-made man who came from nothing, and therefore rubs Mr. Hillcrist up the wrong way with his lack of nobility and social graces. It is no fair, however, for me to besmirch this film for not being what I had expected it to be, so I shan’t.What I shall criticise though is that its really not very exciting. The centrepiece revolves around an auction house, with the two rival patriarchs bidding for the same plot of land. Hornblower wishes to build upon it, whereas Hillcrist would rather it remain scenic. Unfortunately the scene wasn’t terribly compelling, and surprisingly for a Hitchcock film it was also fairly devoid of any tension. This wasn’t helped by a problem I consistently had with this film which was the sound quality. Some scenes of dialogue were almost impossible to make out, occasionally characters weren’t quite close enough to the boom (if they were around back then) to be audible, and the DVD I watched had no subtitle options to be found. There was also some appalling ADR in ridiculously hoity-toity upper crust accents that I assure you we do not all have over here. At times though, as in the aforementioned auction scene, the poor sound quality is bizarrely referenced in the film, such as when the auctioneer’s assistant cannot be heard by anyone. If all the poor sound was intentional then it was a strange joke to play on the audience, but I suspect Hitchcock became aware of the issues during the filming, so snuck in a little self-referential nod to either show his annoyance at the sound guys or to try and make it all look intentional. Either way, I didn’t approve. 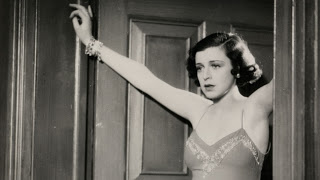 One thing I did approve of was the depiction of the different classes and their sensibilities. The class system in England is nowhere near as divided as in this film, so some moments don’t have quite the impact they would have had back in the day. One of the earlier incidents in the war between the families occurs upon arriving at the auction house, when Mrs. Hillcrist (Helen Haye) goes out of her way not to acknowledge Mr. Hornblower’s daughter-in-law Chloe (the beautiful Phyllis Konstam, also seen in Murder!). Everyone reacts to this as though Mrs. Hillcrist just shot Chloe in the stomach after running over her puppy, so extreme is this shunning. Mr. Hornblower retaliates, only for Hillcrist to find some information on his family that could prove disaster to him if it were to leak, or even if his son (John Longden) were to discover it, but Hillcrist is himself conflicted as to whether he should abuse this information or not, as it would involve sinking to the level of his nemesis, someone he steadfastly wishes to remain superior to, morally.

There was also one terrific shot that transformed a picturesque view from a window into the exact same landscape’s photograph on a poster. This, however, was not enough to save what could have been a far greater story. The ending also came about too abruptly, and it would have paid to have shown a bit more of the fallout from the events, as I’m sure some more escalation could have occurred.

3 thoughts on “The Skin Game”