Johnny Jones (Joel McCrea), a reporter for the New York Globe, has just been assigned to be the newspaper’s foreign correspondent in pre-Second World War England. Jones has no knowledge of anything outside of America – his foreign language skills amount to being able to ask “Parlez vous Francais?”, “Sprechen sie Deutsch?” and pig latin – which is exactly why he was hired – his boss wants someone fresh to the situation, an “unused mind” (which basically means he’s an idiot). As with most Hitchcock movies, out hero (who has been given the pseudonym Huntley Haverstock, but in true James Bond fashion still introduces himself to everyone as Jones) becomes unwittingly embroiled in a murder, and goes rogue attempting to solve it with some friends he has made on his travels. 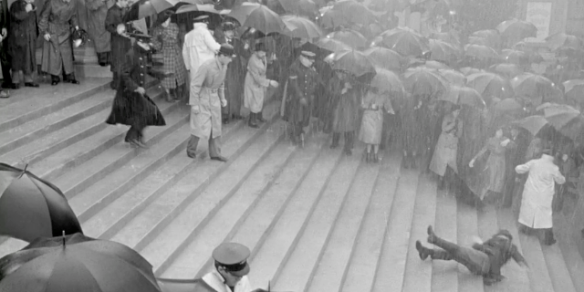 This movie feels a lot like Hitchcock treading old ground, but that’s not necessarily a bad thing when the ground being re-trodden is as entertaining as this movie, which at times is a lot of fun, especially as it ramps up to an utterly unexpected action-packed climax. The plot gets very confusing at times, because there’s a wealth of characters here, many of whom come and go with no real significance – I’m still unsure of who the polite little Latvian man was, and what purpose he served other than as a catalyst for Jones to meet Carol Fisher (Laraine Day), the daughter of one of Jones’ UK contacts, who inevitably falls for Jones and they run off together to solve the mystery of the assassination. Carol, as it turns out, is almost entirely unnecessary herself. She starts out as a feisty, knowledgeable, strong-willed woman, but soon descends into a love interest and overall endgame for our hero, as well as being a pawn in the plans, but who ends up not being that vital to anything that happens at all. Also, I’m starting to get annoyed with couples in Hitchcock movies who inexplicably decide they simply have to get married, despite having known one another for a matter of days, if that. I don’t think it’s entirely a sign of the times, but I’ll be sure to ask my grandparents next time I see them. By today’s standards, it’s ridiculous.

As the other half of this aforementioned couple, Jones gets a much better arc than Carol. He starts out as an opportunistic reporter who is only interested in the expense account for whatever job he is being signed up for, but by the end he’s a seasoned international journalist who understands the importance of the story and his role in uncovering it. Alas, there are large swathes in the second and third acts where Jones is conspicuously absent from the proceedings. However, in his stead we get one of my new favourite actors, George Sanders, who I’d never heard of until a few months ago when I saw All About Eve, and then he almost stole Rebecca, and now I want to see everything he’s done (and yes, I know he’s Shere Kahn, but did you know he played Mr. Freeze in a few episodes of Batman? Neither did I! I must watch this, now God dammit!). Sanders plays a guy named ffolliott, whose family had the capital letter removed from their surname when an ancestor was beheaded. He is essentially a more professional and experienced version of Jones, but much more English, of course, and he’s wonderful. Elsewhere in the cast there’s a small role for another recent favourite of mine, Edmund Gwenn (The Trouble with Harry, Waltzes From Vienna, The Skin Game), as Jones’ new bodyguard, who alas doesn’t become as integral of a character as I’d have liked, but does what he can with the little time he is given.

There was a great deal of tense scenes and interesting predicaments that I greatly approved of here, from Jones being trapped in the cogs of a windmill, to being stuck outside the top floor of a hotel in nothing but his bathrobe. Even more than this, the methods by which Jones and his friends get around these predicaments are even more fun than the situations themselves. On the other hand, there is at least one very unsettling scene – a helpless, deranged old man is tortured – that I could have done without as, although we thankfully are not explicitly shown the torture, my imagination went to some dark spots. Fortunately, not long after this we get the balls-out finale, in much the same respect as in The Lady Vanishes, and just like there it was very much appreciated.

All in all, the plot got a little too complex, especially with regard to what exactly Jones is supposed to be investigating, and why, and for my liking there are too many scenes of Jones yelling at foreigners and getting blank, confused looks in return, but other than that I thoroughly enjoyed this movie.