Berlin, 1958. A teenage boy coming down with scarlet fever is briefly cared for by a woman whose apartment building he has just vomited in. Once he is healed, the two begin a secret relationship revolving around sex and literature, however his youth becomes a problem, and the pair are driven apart. Some years later, the boy becomes a student at law school, and ends up sitting in on a case in which his former fling has an important role, and only he may have the key to save her.

For her performance in The Reader, Kate Winslet received her sixth acting Oscar nomination, and with it proceeded to win for the first time. This was thoroughly deserved (although I question some of the nominations; personally I think Iris didn’t really deserve much of anything for her), but her win was overshadowed by her recent appearance on Extras, in which she played a foul-mouthed version of herself who was obsessed with winning an Oscar. And sex, she was fixated with that too. In the show, she was adamant that the only way she would ever win an Oscar was if she played a Nazi. And lo and behold, what did she win the Oscar for? A role of a former Nazi, who also had copious amounts of sex. With a boy who was probably under age. Yes, sometimes life (or at least Hollywood) really is that predictable. 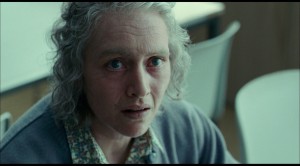 Winslet of course plays the carer and vigorous lover of the young boy, Michael, who is played by David Kross as a child and Ralph Fiennes as an adult. The performances of all three are what truly holds this film together, as the narrative itself is fairly loose and is split relatively evenly between three different periods in the lives of the protagonists. Winslet is the standout, and gets to play ‘old’ for the first time, even if her make-up isn’t entirely convincing. Her portrayal of Hanna is a bold one. Winslet has never shied away from nudity, but this could be her most nude role to date. It’s never sexual, merely indicating a comfort and familiarity with the other person (Kross is naked a lot too), and she is also unafraid to play someone who isn’t typically beautiful. That’s not to say she’s ugly, she just isn’t the icon of perfection that the glossier films all strive to display. Instead, Winslet proudly displays unshaven armpits and unplucked brows, and a face entirely devoid of make-up beneath a knot of braided hair. Considering she is the primary love interest in the film, this is something of a revelation.

Fiennes is also good in a smaller role, though he doesn’t have a great deal of heavy lifting to do, but it is Kross who impressed me the most, especially considering I’ve only previously seen him briefly in War Horse. He is essentially the lead for two thirds of the film, and he portrays some fairly complex emotions in a more than capable fashion. I’ll be keeping an eye on his future, rest assured.

In terms of plot, you essentially get three stories in one. The first is an across-the-tracks romance, the second a courtroom drama, and the third I won’t go into, for fear of spoilers, but it is the most touching segment, even if it’s also the most problematic to understand. That’s the thing, there are some infuriating moments here when it comes to character decisions and motivations. I can kind of understand why various people behave the way they do, but it’s all shown with a considerable lack of foresight that makes watching it intensely aggravating. There’s also some truly despicable characters – somehow they managed to make Nazis even worse – and even one who was in a sense a sympathetic character came off as someone I’d really like to slap. Whether this was purely because she walked around her home wearing a jacket but with her arms not in the sleeves like something out of Goodfellas is yet to be decided.

This was my second viewing of the film, and normally, when a film includes a second-act revelation as this one does, you spend the re-watch of the first act picking up on the subtle clues dropped the first time around that hinted to where it was going. The problem with the Reader is that, at the moment of the realisation, there’s a handy-dandy little flashback sequence that picks up on every single hint dropped, so the second viewing offered nothing new to pick up on other than some character nuances I’d missed first time around. This doesn’t necessarily make it a bad film, but it does deter me from returning to watch it again, as I doubt there’ll be much more to gain from it. Either way, even without the hints there’s still a lot of thought provoking scenarios and questions raised – how one person’s personal relationship can impact the perspective of a criminal case, how far one would go for the sake of pride. And I also appreciated how relevant books were to every aspect of Hanna’s existence, something I’d missed first time around.

2 thoughts on “The Reader”