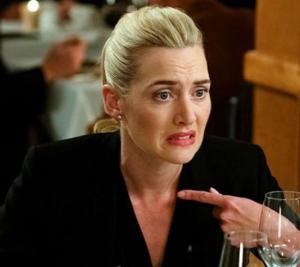 Fuck me this is a terrible film. You know those films that come out that get the really terrible reviews? The ones that are written off by every critic? The ones that you just mentally sweep under the rug of indecency and forget all knowledge that they ever existed? This makes them look amazing. Upon its release, I made a mental note never to see this film, but then they had to go and get Kate Winslet to appear in one of the sketches, and as I’ve made it a mission to watch all of Winslet’s films I subsequently had to endure this garbage too. Granted, there was a modicum of curiosity tied to my viewing, as I had to wonder just how could a film with so many well known and genuinely gifted people behind it be as awful as everyone has said? I’d assumed they were all correct, but there was part of me that just had to see how bad this film was, and in case you haven’t picked up on it yet, it really is awful. 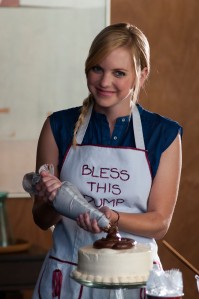 It’s difficult to pin down exactly the worst aspect of the film. Well, I suppose the main problem is that presumably this was supposed to be a comedy, yet there’s precious little to actually laugh at. Throughout the (mercifully short) duration of the film I may have chuckled at most twice – once when Anna Faris’ would-be coprophiliac was icing a turd onto a cake, and once during a skit about superhero speed dating – but elsewhere the film was a mirth-free environment. There are some jokes in there that probably would have been funny, had they not all been spoiled in the trailers. The sketch that suffers the most from this is one of the last, titled Victory’s Glory, in which Terrence Howard coaches the first African-American basketball team, and basically gives them a speech about how they’re going to win simply because they’re black. He has a few good lines here (“You’re black, they’re white, this ain’t hockey!”), and he plays well off the oblivious players on the team, but alas it made up the majority of the trailer, so didn’t even raise a smile. 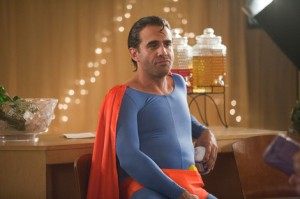 What little enjoyment I had came almost entirely from the cast, which is phenomenal. I don’t just mean the likes of Winslet, Hugh Jackman, Naomi Watts, Liev Schreiber, Richard Gere and Gerard Butler, as from the trailer I knew they were all present. I mean the supporting cast, which was full of actors whom I love seeing crop up in films, and can rarely get enough of. People like Patrick Warburton, Matt Walsh, Bobby Cannavale, Jack McBrayer and J.B. Smoove, all of whom were delightful surprises, until I realised that even they couldn’t turn down whatever bribe they were paid to appear in this tosh. 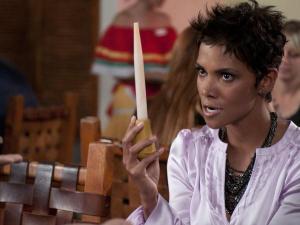 I think the reason that so little is funny is because, although there are potentially humourous situations, they are all either taken far beyond anywhere that humour lives, and are done so at such a rapid pace that the comedy has no room to breathe before it just becomes asinine or repulsive. Take the Truth or Dare segment, starring Halle Berry and Stephen Merchant. They are on an improbable blind date, and she suggests that instead of the usual meaningless small talk they take part in a game of truth or dare. This initially builds slowly, with a few Truth challenges, before Merchant’s Donald is dared to grab a strange man’s backside. So far, nothing wrong, but within seconds of this Berry’s Emily is taking the pictured turkey baster, filling it with extremely spicy hot sauce and injecting it somewhere that makes even me cross my legs, and I don’t have the area she inserted it into. Things get far worse from there, involving Berry’s nudity – something she’s never exactly shied away from – before the pair of them get horrifying and offensive plastic surgery, and live happily ever after. Now, in the early stages of the sketch, there was some genuine comedy, mostly from Merchant’s awkward persona around someone so aesthetically out of his league as Berry, but instead of mining this, the depths of depravity were excavated instead, leaving us with something that isn’t funny but is more than a little stomach churning. 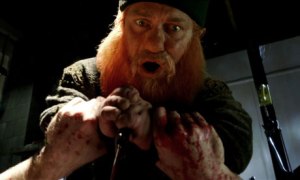 There’s a fairly high probability that I’m not within this film’s target demographic – what with my having the capacity to use words longer than “lol” – but if this is the kind of film that the younger generation enjoys then I have serious concerns for the future of our society. When I was younger I enjoyed the likes of Dumb and Dumber, There’s Something About Mary and Monty Python and the Holy Grail, which all admittedly have their crude moments, but their methods of comedy are varied, clever, lasting and, above all, actually funny, whereas this would doubtfully raise even the briefest of smiles upon a second viewing, though I hope no-one has had to suffer through it more than once. We actually stopped watching halfway through on the first attempt, and I bravely soldiered on alone the following morning to continue my journey into depravity. Most of me wishes I hadn’t continued, as I’d have been spared such gems as a guy masturbating to his own mother, a cartoon cat aggressively urinating on Elizabeth Banks and Gerard Butler’s testicle-obsessed leprechaun. 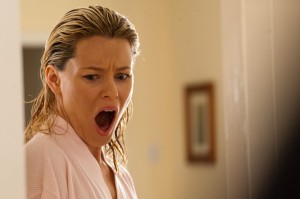 You may be shocked to hear that one scene was actually declared unworthy of the film, and remains cut but included as a bonus feature on the disc. Don’t ask me why, but I sought this out too, and indeed it was decidedly odd and bitter even for this film. It sees Julianne Moore and Tony Shalhoub as parents to a missing teenager, who is prone to taking her top off whenever being filmed or photographed. I’m a fan of Shalhoub’s, and am always happy when he crops up in something, but after this I like him a little less as his character is fixated on getting his daughter back because – I think – he loves her breasts. I’m pretty sure this was omitted for being just a little too weird, and because it doesn’t really go anywhere. I just wish some other scenes had been cut too. All of them, in fact. I’d also rather have seen the American over-arching story, apparently featuring Dennis Quaid as a screenwriter pitching movie ideas to Greg Kinnear and Common, as Kinnear is always good, and I hear Seth MacFarlane makes an appearance too. 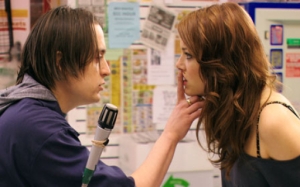 The film’s only saving grace is the performances. The cast are all incredibly game and committed to giving the best performances the script will allow – even if that means making guacamole with their breast or sucking Kieran Culkin’s finger – which just makes it all the more depressing that even that couldn’t make anything other than this mess. Believe the reviews, this is not worthy of your time. I may never forgive Kate Winslet for appearing in this, and I just pray there’s no Movie 44, and if there is they don’t get any decent actors I want to follow to appear in it and forever besmirch their career.