END_OF_DOCUMENT_TOKEN_TO_BE_REPLACED

This review was originally written as part of my road trip series for French Toast Sunday.

In Bloomington, Indiana, four aimless teenagers, fresh from leaving school for good, spend their summer days hanging out at the local quarry – where their fathers all used to work – and terrorising the students at the local university. One of the four, Dennis Christopher’s Dave, has recently become obsessed with cycling, specifically the Italian team, who are due to visit Bloomington that year. Dave aims to compete against them in a race, and also plans to take part in the university’s annual cycling event, which has recently extended its rules to include a team from the local town. Also, Dave meets a girl, and inexplicably pretends to be Italian in order to woo her.
END_OF_DOCUMENT_TOKEN_TO_BE_REPLACED

END_OF_DOCUMENT_TOKEN_TO_BE_REPLACED 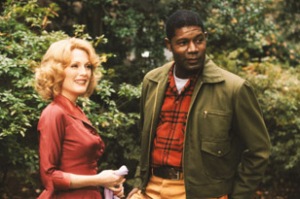 Hertford, Connecticut; 1957. Cathy Whitaker (Julianne Moore) is at the heart of her picket-fenced community, her husband Frank (Dennis Quaid) is a successful businessman and her two young children are little bundles of perfection, with her daughter wishing to one day grow up to be just like her mother, though her son is a little foul-mouthed (“Ah jeez” is not the kind of language Cathy tolerates).  But beneath the surface of floating dresses and pristine curls, all is not well. It’s clear from Cathy’s expression that, though her friends must all put up with their husbands’ occasional demands for intercourse, Cathy has no such problems, for Frank hides a secret; whenever he is ‘working late’ he tends to be frequenting a bar aimed only at male patrons that want to get to know each other a little better.
Todd Haynes’ movie lovingly recreates an idealised vision of 1950s suburban middle America (“Aw shucks” is uttered in the first four lines, and “jeepers” and “swell” aren’t too far behind) although the rampant sexism and racism would be more than frowned upon today. When Cathy shows sympathetic tendencies towards her black gardener Raymond (Dennis Haysbert, 24‘s President Palmer) she is the subject of mild ridicule and is frowned upon by the society that used to hold her dear. Haysbert is good in another of his solid, decent, all-round nice guy roles, but Dennis Quaid continues his run of being the worst thing about a film. I’m sure in his youth he must have done something to earn a reputation as an actor, but I can’t for the life of me think what it is, I’ve only ever known him as the worst thing in bad films (Flight of the Phoenix, Smart People, The Day After Tomorrow, Vantage Point).
The era is seamlessly recreated, to a point where the film could easily have been made in the 50’s – in which case it would probably be hailed today as a classic. Moore is the best thing in it, so much so that at times she barely seems to be acting, so great is the level of repression she must convey. She received an Oscar nomination for her troubles – Nicole Kidman must have been really great in the Hours to beat her.
Though at times it feels like nothing really happens, that is surely the point. This is more a study of the prejudices of the era – Frank’s grand social indiscretions can be brushed under the carpet or cured (a doctor has a 5-30% success rate for curing homosexual urges) whilst Cathy’s much lesser faux pas sees her outcast from all around her. The plot and script are a little hokey, but the performances and overall feel stay with you after watching this subtle piece.
Choose film 6/10