I’m not really one for new year’s resolutions. Regardless of how many things in my life I’d like to change – weight, social life, number of films I watch – the whole resolution concept is one I’ve just never comfortably got behind. However, at the start of this year I made a small mental note that I’d like to podcast a bit more, with the specific aim of appearing on one podcast in particular – the Milfcast, the official podcast of manilovefilms.com. Hosted by Kai and Heather, it’s easily one of the most entertaining podcasts available, and covers such diverse subjects as the Alien franchise (particularly Aliens) and defecating in cereal (particularly Cheerios). A few months ago I was fortunate enough to appear on a Lambcast episode with Kai, during which I’d intended to ask him how one would become eligible to guest on his great show, only for him to invite me on before I had a chance. As such, you can hear Kai, Heather and myself discussing all manner of film-related things on the latest episode of the Milfcast, which can be found here.

On the episode, the general discussion topic, as selected by myself, was our favourite voice performances of animated characters. I mention on the show that this was perhaps the hardest list I’d ever compiled, mainly because it could only consist of three entries. However, with so many possible entrants available I just had to expand it, so here’s my top 10. Oh, and I limited myself to just one selection per film, if you were wondering.

If there is any possible way that I can crowbar Jurassic Park into a Top 10 list, you can rest assured that life will find a way. Although Mr. DNA doesn’t have much screentime in Jurassic Park, he has one of the most important roles in the film – delivering the most perfectly executed exposition sequence in movie history, and he sounds exactly like the kind of second rate educational short films you’d be forced to sit through at school.

10. Steve (Neil Patrick Harris), Cloudy with a Chance of Meatballs 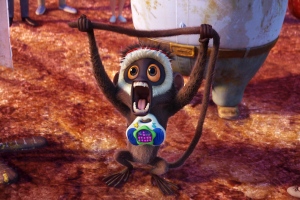 I really, really like Cloudy with a Chance of Meatballs. It’s an animated film that doesn’t get the attention it deserves, and for the life of me I can’t say why. It’s imaginative, hilarious and has a great – if utterly insane – story, and the voice cast is amazing too. Bill Hader is the lovably eccentric inventor Flint Lockwood, Anna Faris his weathergirl love interest and James Caan his gruff father, but it’s the supporting characters that elevate it all. Bruce Campbell is wonderful as the gluttonous mayor, Mr. T is awesomely quotable as the town’s policeman, but my favourite is the character that just repeats one word, “Steve!”, as voiced by Neil Patrick Harris. The fact that NPH agreed to voice a monkey’s talking mind-reading device in the first place shows how great the film is, and the multiple inflections on the “Steve!”s are some of the funniest moments of the film.

I used to like Happy Feet quite a lot. I think it’s the penguins, the birds in general have always amused me somewhat. Now, however I think it’s a little uneven and lacking in fun, even if the animation itself is incredible. Something I’ll never get tired of though is Hugh Jackman’s voicing of Memphis, father to toe-tapping Mumbles, mainly because his character is essentially Elvis Presley with flippers.

8. Pirate Captain (Hugh Grant), The Pirates! in an Adventure with Scientists

Pirates! is another animated film that I don’t think really gets its due praise. All stop-motion Aardman films are wonderful (we don’t talk about Flushed Away) and this one is easily just as hilarious, creative and downright enjoyable as the likes of Chicken Run or any of the Wallace and Gromit pictures, yet elsewhere I hear largely negative feedback. Anyway, Hugh Grant has the starring role as the Pirate Captain, resplendent in his luxurious beard, through which his voice is almost unrecognisable, despite retaining his token blustering foppishness. And to be fair to the rest of the cast, they’re all perfectly cast, from David Tennant as a petulant Charles Darwin, to Brian Blessed’s brief but boisterous cameo as the Pirate King.

Finding Nemo was the first Pixar film that I absolutely adored, although that list has now expanded to include practically every film they’ve released. My favourite character in the film is Crush, as voiced by director Andrew Stanton (listen to the Milfcast for my impression of him), but in terms of vocal performances I like Barry Humphries’ Bruce best, particularly the way he says “Helloooooooooooo,” which I try to emulate every time I watch but can never quite get right. Oh, and as mentioned during the show, Ellen Degeneres as Dory is absolutely perfect and comedic gold, and my other half will probably never forgive me for not including her on this list, but I just prefer Bruce. If I allowed more than one character per film, she’d easily be in the top 10, and I really hope they do her character justice for the upcoming Finding Dory.

He made it onto my list of Top 10 Superheroes, and I think Samuel L. Jackson does such a great job adapting his epitome-of-cool tones to this epitome-of-cool character that he deserved a slot here too. The favourite scene in our house is the exchange with his wife (Kimberly Adair Clark) regarding the whereabouts of his supersuit, and damn if my girlfriend doesn’t have that script down pat. Elsewhere, Brad Bird’s Edna Mode (who always reminds me of Zoe Wanamaker, who played Madame Hooch in Harry Potter and the Philosopher’s Stone and Susan Harper in My Famliy for 12 years) is nothing short of a delight, and Jason Lee is great as both the young Buddy and the older Syndome. Pixar always does such a great job with casting.

Speaking of which, when it came to providing the sound effects for an adorable yet functional little robot who could only ‘speak’ through beeps, whistles and contorted electronic whirrs, who else are you going to ask than Ben Burtt, ‘voice’ of R2-D2? Burtt’s work here comes pretty damn close to surpassing some of the astromech’s dialogue, like his utter desperation and disappointment when EVE (Elissa Knight) can’t pronounce his name properly (she calls him Wally). I understand a lot of the performance is in those big ole’ binocular eyes and they’re twitching, but it’d be almost nothing without Burtt behind those beeps and whistles.

I think I’ve talked about Gnomeo and Juliet on a Lambcast before, and I unashamedly really like this film. I do enjoy Shakespeare adaptations, and this one’s played out with animated gnomes, monstrous lawnmowers, a horny frog and a one-legged Hispanic flamingo. The cast is also phenomenal, ranging from James McAvoy and Emily Blunt as the eponymous leads, Maggie Smith and Michael Caine as their respective parents, and all the way down to Ozzy Osbourne, Dolly Parton, Hulk Hogan, Julie Walters, Richard Wilson, Matt Lucas and Stephen Merchant as bit players dotted around. Jason Statham is also a treat as Tybalt, but it’s a last act cameo from Shakespeare himself – or at least his statue – that gets me every time. Voiced perfectly by Shakespearean actor Patrick Stewart – who else? – he’s wonderful. More of him, please. 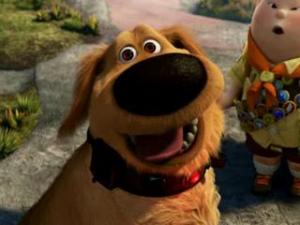 And now we get to the three that I discussed on the Milfcast. Up is another Pixar film I love so very much, and easily the most enjoyable aspect of that is Dug the talking Dog, as voiced by co-director and regular supporting-voice-cast Bob Peterson. Dug is so much fun, and Peterson’s lovable, hyperactive sugar-high delivery makes you wish all dogs could talk, or at least all the friendly-looking ones. He has a much smaller role, but Delroy Lindo as fellow canine Beta is also a welcome voice to the ears. 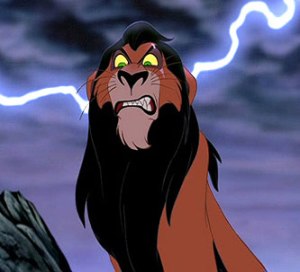 As if The Lion King wasn’t going to make an appearance. As I’ve mentioned, this is officially the first film I remember seeing, and it’s had a profound effect on my since then. Amongst all the great cast members – James Earl Jones as King Mufasa, Nathan Lane as Timon, Rowan Atkinson as Zazu, Robert Guillaume as Rafiki, Ernie Sabella as Pumbaa – pick of the bunch must be Jeremy Irons as Scar. He has such a great voice, either dripping with promise or snarling with fury; with him, every line is a winner.

As I mentioned on the Milfcast, this entire Top 10 could have been plucked from the Toy Story trilogy. I’m sure one day I’ll do my top 10 Toy Story characters, so I won’t bore you with that now, but it’ll be interesting (for me at least) to see if, a few years down the line, Timothy Dalton’s Mr. Pricklepants still comes out on top. As soon as Pixar announced his character poster and casting details I was on board and couldn’t wait to meet this lederhose-wearing felt hedgehog. He looks so adorable (yes, we have a plush version somewhere), and his character, that of a classically trained actor going method in the improv-world of playtime, is the highlight of the film, possibly the trilogy. And with so many other incredibly cast characters in this trilogy, that’s truly saying something. I hope he has a decent role in the upcoming Toy Story of Terror.