Homes. We all have them. Well, homeless people don’t, but I’ve found my readership is made up with less and less of these people every day, so I can safely assume that if you’re reading this then you probably have a home. As I mentioned on a recent Lambcast (with Justin and Dylan, both from Man, I Love Films), I’ve just moved house (or “moved,” as they refer to it). Regular readers will know this has been a long and drawn out process, so I thought it deserving of a Top 10 list devoted to it. Plus, it’s my first actual house (I used to live in a flat, or apartment), so it’s something of a milestone in my life.

Movie houses come in all shapes and sizes. Many films deal with a certain amount of wish fulfillment, and therefore tend to feature exceedingly wealthy characters that can afford lavish palaces in picturesque locations, and these are definitely represented on this list. However, this isn’t a list of the biggest movie houses, these are the ones that I’d most like to live in, kind of, or one’s that represent a certain kind of life. You’ll see what I mean.

As always, I’ve set myself some requirements. Firstly, whilst it doesn’t necessarily have to be a house, it cannot be an apartment, as that could be a whole other list, presumably when I eventually can’t make my mortgage repayments and have to downsize. And that’s about it. No other rules. Nice and simple.

As much as I dislike this film, and I really don’t like it, I cannot deny that I’d really like to own both houses. I’d live in Cameron Diaz’s L.A. mansion, next door to Eli Wallach and his awesome old Hollywood stories, but I’d keep Kate Winslet’s Surrey-based Rosehill Cottage for long weekend’s in the countryside, or just getting away from it all and doing some writing. It’s a Nancy Meyers film (and not the last one on this list), so of course it’s about the tragic lives of successful people who can afford such idyllic homes, and the houses here are just beautiful. It’s a real shame that Rosehill Cottage itself doesn’t actually exist – exterior shots used a fibreglass shell – but I suppose that’s probably for the best, as it’s in such a remote location that living there would be highly impractical. Also, I highly doubt that Winslet’s Iris could afford a place like that, plus a daily commute to London, on a journalist’s salary.

Like Rosehill Cottage, this is a house I wouldn’t necessarily like to live in full time, but it would be nice to have on the side, for when you need to get away from absolutely everything. Even if you took people there with you, there’s enough secret tunnels and hideaways that you could easily just seclude yourself off into a room somewhere and potentially not be bothered for days. The groundskeeper is something of a character, and I wouldn’t recommend swimming in the nearby lake, especially in winter.

This is definitely a stylistic choice. Cameron’s Dad’s house, with it’s massive windows, woodland setting and stilts looks amazing. If it was in a more built up area it’d be far less practical – you’d at least need some net curtains or frosted glass on those windows for a bit of privacy – but out in the woods, with no-one around, well that’s just dandy. And obviously, I’d like this house before the car drives through the window. I hate to think how much a sheet of glass that size would cost to replace. Actually, now I think about it, this place would be a bugger to keep clean, so maybe not.

8. The Pirates! In an Adventure with Scientists

The house of Charles Darwin (David Tennant) isn’t overly impressive really, especially when compared to others on this list. Granted, it’s quite tall, with lots of storeys, but in terms of a piece of architecture it’s just another property. However, the sheer amount of interesting artifacts housed within it would provide a treasure-hunting expedition in every room. There’s battle masks, an Easter Island head statue, stuffed elephant, bear, dinosaur skeletons! Also, it comes with a monkey butler called Mr. Bobo, who communicates exclusively through title cards. Sold.

The villains always have the best lairs, don’t they? Whether it’s Blofeld’s volcano, Cruella De Ville’s mansion or the frickin’ Death Star, it seems the bad guys always have the best digs. I have to pick the not-at-all ostentatious hideout of Vandamm (James Mason) as my favourite though, and not just for the landmark location and the amazing exterior. No, I really approve of the inside as well. With the exposed brickwork running throughout, mid-level balconies, interesting chimney design (it’s on an open corner, I’ve never seen that before) and all round good eye for decor, this is a house you wouldn’t mind being kept captive in. Just always be sure to drive down the mountain, don’t climb down Lincoln’s nose.

6. Much Ado About Nothing/Something’s Gotta Give

Here we have two examples of just really nice (and probably insanely expensive) houses that make their way onto the list simply because they’d probably be really amazing – in a completely functional way – to live in. The house in Much Ado About Nothing, famously belonging to the film’s director, Joss Whedon, has a massive kitchen, swimming pool, balconies, shelves full of books, and seems to be an awesome place to hold a party. Similarly, the Hamptons beachside property of Erica Barry (Diane Keaton) in Something’s Gotta Give seems like the ideal place to kick back and relax, maybe doing a little writing, or just visiting with a late-20s Amanda Peet. Also, it has one of those giant circular driveways that I just love. Every house should have one, preferably with a fountain in the middle like a roundabout.

5. Beauty and the Beast

On the complete opposite end of the spectrum from those last two, Belle’s father’s farmhouse in Beauty and the Beast has seen much better days, but that doesn’t make me want to live there any less. I love the quirky look, with chimneys and weather vanes jutting out all over the place, plus there’s the water wheel and a small library, and the location of being in an idyllic little town complete with bakery, bookshop, tavern and market, everything you’d need to get by. Well, a cinema would be nice, but you can’t have everything. I’d much prefer this house over the mansion the Beast lives in, mainly because all those staff would get on my nerves after a while, but without them you’d never keep the place clean. Plus, what the hell need do I have for a ballroom? I’ll take the library though.

This is truly where my English-ness shines through. Bilbo Baggins’ under-hill home is quaint, cosy and, at least when compared to real-world houses, rather quirky. In fact, it may be a little too cosy, as at 6-foot-3 I’d probably need the place scaled up a little bit. Bilbo (Martin Freeman/Ian Holm) lives alone in his maze of wood-panelled round rooms, with solid oak doors and thick rugs. It’s all so very homely, and the life he leads, whilst not terribly exciting, is at least enjoyable and satisfying. His home is his castle, and it just happens to be entirely built under a hill. 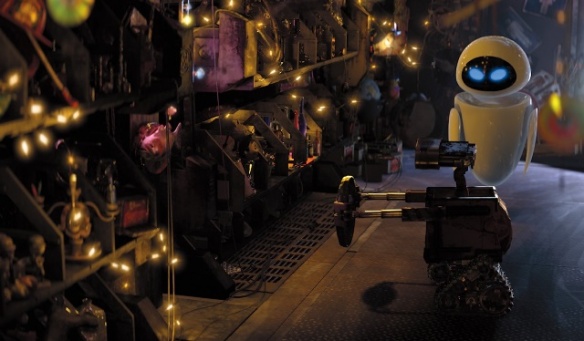 OK, so this is a home I definitely do not want to live in, but Wall-E’s Buy’N’Large cargo container is a hoarder’s dream. Not that I’m a hoarder, of course, I merely collect things that might, one day, be useful, and refuse to throw things away until the certainty that this day will never come (as in, never). I also like to retain interesting knick-knacks and ingenious mechanisms, mainly because they fascinate and inspire me. Wall-E is very similar in this respect, as his container is a veritable treasure trove of Rubik’s cubes, lightbulbs, frisbees and anything else he’s taken a shine to. The scene where he takes EVE back to his place to show her how he lives is one of my favourite in the film, and her initially unimpressed reaction is downright heartbreaking.

The last lavish property on the list, this is a lesson in showmanship and flash. 10880 Malibu Point, 90265 (as Tony Stark (Robert Downey Jr.) tells us in Iron Man 3) is a huge bachelor pad/workshop, set directly on top of a sun-drenched cliff in southern California. It’s gorgeous, but that’s not the only reason I dearly wish to live there. No, there’s also the Paul Bettany-voiced intercom, the robot assistants, the tech-filled workshop, garage of beautiful cars, and the fact that he’s got a goddamn piano, just for the sake of it. In fact, everything about this place is just wonderful. When it got destroyed in Iron Man 3 it damn near reduced me to tears.

No, it’s not because it can fly. Although that’s pretty cool, and the take-off sequence for me is even better than those heart wrenching 10 minutes that precede it (the little girl in her bedroom, as it fills with the multicoloured balloon lights is just beautiful). No, what I love about this house is more what it represents, which is the life Carl (Ed Asner) and Ellie had together. They first met in the dilapidated ruin when they were children, before getting married, buying the place and fixing it up together, painting it in the unusual colour scheme you can see above, and living there for the rest of her days. This was the first film my girlfriend and I ever saw together, and I like to think that symbolises this will be the kind of relationship we have too. Not to get too mushy on you, but I can’t pick a better house, and therefore a better life, than the one shown at the start of this film, right up until near the end of the montage. This may not be the best movie house, with it’s moderately sized rooms, unimpressive size and complete lack of monkey butlers, but it is definitely the best movie home.