Travis Bickle can’t sleep. He lives in New York and is up all night, so why not become a cab driver? Well, for starters, he hates pretty much everyone on the streets after dark, plus, he’s a potentially psychotic madman, with aspirations of saving, destroying or integrating himself into society, depending on the day. He spends his days pining for a campaign worker for a local presidential candidate, but when that relationship turns sour Bickle’s attentions turn to a young prostitute, whom Travis believes is in need of a saviour.

Taxi Driver was voted Movie of the Month over at the LAMB. I’ll be posting the podcast we recorded about it up tomorrow, along with a tie-in Top 10 post, but for now here’s my review. Technically this isn’t my first viewing of Taxi Driver, as I recall sitting through it about 8 years ago, but I didn’t really pay attention. I could pick out some scenes from my memory – the infamous “You talkin’ to me?” scene, Bickle’s disastrous date with Betsy and some bits of the climactic scene, but other than that this was pretty much new to me. In my memory it’s become merged with Midnight Cowboy, so I spent most of the film waiting for Robert De Niro to almost get hit by a car walking across a road, and scream “Hey, I’m walkin’ here!” at the driver.

First off, De Niro is amazing. He is completely believable in every aspect of Travis, and he never seems to let himself slip through. This is very important, as his performance is the cornerstone of the film, and everything else surrounds him. Whether he’s talking a little over enthusiastically to the secret service man guarding a presidential candidate, attempting to woe the candidate’s campaign worker, Betsy (Cybil Shepherd) or lecturing to a pre-teen prostitute (Jodie Foster), De Niro isn’t simply acting as Bickle, he is him. I really appreciated his slow descent into his different levels of madness. He eventually sets out to go on a killing spree – a killing spree of redemption, so it’s kind of a good one – but his first kill is almost unintentional, and certainly wasn’t planned, when Travis apprehends a would-be shop-lifter. The scene seems to be of little to no importance, but I felt it was integral to show Travis discovering he was capable not just of owning a gun, but using it too.

Surrounding De Niro is a wonderful supporting cast. Alongside the aforementioned Shepherd and Foster, the latter of whom is wonderful, but I wasn’t overly impressed with Shepherd, who came off quite bland to me, there’s four stand-outs in Albert Brooks, Peter Boyle, Harvey Keitel and a one-scene cameo from the director, Martin Scorsese. Boyle plays Wizard, a colleague of Travis’, who gained his nickname from his many years as a taxi driver, and the level of advice he is capable of providing. Boyle, who looks downright weird with hair, despite it growing only from the sides of his head, doesn’t have a very large role in the film, but when he’s on screen I felt drawn to him. Similarly, Keitel only crops up for a handful of scenes towards the end of the film as the pimp to Foster’s Iris. It’s clear from the off that Keitel’s Sport is something on an antagonist to Bickle, from his alpha male mannerisms and shifty demeanour, and the fact that he pimps out under-age girls for sex. When Sport’s justice is served it’s genuinely satisfying, but almost disappointing in how quickly it is undertaken. Brooks may be my overall favourite element of the film, especially when you consider I had no idea he was in it, and he offers some much-needed comedic relief to what is an otherwise almost entirely serious film – unless you’re a fan of midnight-hued comedy. He plays Tom, a co-worker of Betsy at the campaign for Charles Palantine, the presidential candidate. It’s clear Tom has a thing for Betsy, but she is less into him than he is to her, but he still retains illusions of possessiveness towards her, so when Bickle appears to be moving in on his territory, Tom is understandably defensive. The scene when Travis and Betsy first meet at the campaign headquarters, in which Travis dismisses Tom so Betsy can sign him up, perfectly showcases Brooks’ character, and also his comedic abilities. He continually walks back and forth past Betsy’s desk to keep an eye on things and, even when back at his own desk, he incredibly indiscreetly peers from behind a pillar at the conversation. I found myself paying more attention to him than to the rest of the scene, which is why Albert Brooks should be in everything.

I mentioned Scorsese has a cameo. He plays one of Travis’ fares, a man spying on his cheating wife, with aim to shoot both her and the man she is sleeping with. It’s the only scene in the film in which Travis appears to be the most normal and grounded person on screen – with the possible exception of his breakfast scene with Iris – and I’m surprised Scorsese performed it himself. It’s possibly the most disturbing scene in the film, yet it only features the guy explaining to Travis what he’s going to do to his wife, specifically which areas he intends to shoot with a .44 Magnum.

This is one of Scorsese’s earlier films – I have technically seen Mean Streets too, but I can’t remember a single element of it – and you can see a great deal of technical flair that Scorsese will go on to master in his later movies. There’s one very simple shot – and I’d like to point out that I picked up on it’s significane before reading about it on IMDb’s trivia page – where after Travis takes Betsy on a particularly terrible first date he attempts to phone her to make reparations, and potentially take her out again. We can only hear Travis’ side of the conversation, and it becomes pretty clear around the third lap of him asking her to give him another chance that this relationship was over before it really began. The camera stays on Travis at the payphone for a few more lines, then it just can’t take it any more and pans slowly away, settling instead on the empty corridor next to him, as though the conversation is simply too awkward to sit through, which it entirely is. Along with the wonderful camera work there’s a terrific score – the last one Bernard Herrmann completed before his death. It’s very jazzy and saxophone-heavy, and it provides a dream-like, hazy feel, which is fitting given it is most commonly played over the night-time driving sequences.

This is not a fun film to watch, but there’s a great deal to appreciate here. From the production design – Travis’ bedside table is literally covered with a cornucopia of pills and tablets – to small conversation details – he is so out of touch with society that he attempts to chat up the clerk at the porn theatre he frequents, oblivious to how often she must receive such attention, and how little she presumably thinks of the clientèle. On a personal note, the engineer in me really enjoyed the scene where Bickle fashions sliding gun mechanisms to attach to his arms for a surprise quick-draw, as well as the practising scenes, wherein he irons out the kinks in the design, and gets the motion down fluidly, beginning with a jerky, awkward action that eventually becomes natural and smooth. I dread to think how long De Niro spent perfecting that. The climax to the film was a little less gory than I expected – which is a good thing, because I hoped it wouldn’t descend into an utter bloodbath. Overall I don’t know if I’ll ever go back to the film, but I’m glad I’ve finally seen it, and actually paid attention this time. 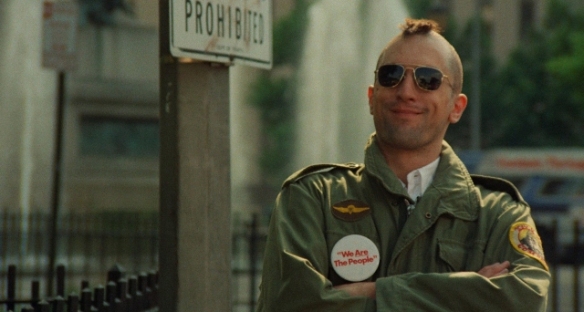