This week’s Lambcast is another Movie of the Month, and this month the topic of conversation was Martin Scorsese’s Taxi Driver. As such, here’s a rundown of my Top 10 Movie Taxi Drivers:

OK, technically neither John nor Zeus (who does not look Puerto Rican to me) are taxi drivers, but at various points throughout this New York-set sequel they do drive a taxi, so technically they are taxi drivers, and therefore eligible for this list. I’ve loved Die Hard with a Vengeance since many years before I even saw Die Hard, and I think it’s the bickering relationship between the two that drew me to it. Specifically, I love the scene in which the two must make it across town in a very short amount of time, during rush hour traffic. The solution? drive straight through Central Park, ploughing through cyclists and pedestrians alike. This scene gives way to my favourite line in the film, when Zeus asks if McClane is aiming for the people, he replies “No, well, maybe that mime.” Other great taxi drivers I could have used are the pain in the ass sports fan who Cuba Gooding Jr. is lumbered with in Rat Race, Darwin (Edi Gathegi) the underused evolving mutant in X-Men: First Class, who we first meet driving a cab, Beauregarde from The Great Muppet Caper, Alan Ford in An American Werewolf in London, J B Smoove in Date Night and the terrifying, snarling, grotesgue “Ain’t much better in here, kid” guy from Home Alone 2.

Many films feature taxi drivers in very small roles, purely for a little character set-up, such as Old School, which has a guy deriding Luke Wilson’s character for complaining about the lack of a seatbelt in the rear seat, thereby setting up Wilson as a bit of an uptight character, at least in the eyes of those around him (I probably would have gotten out of the cab at that point, so I’m definitely in agreement with him). However, other movies have cab drivers who are utterly inconsequential to anything, and just add a little comic relief. Such is the case with Armageddon‘s Stu, a cabbie stuck in traffic during an asteroid strike on New York. He makes his list purely for his delivery of the line following his foreign passenger complaining that she wants to go shopping; “Me too!” He probably has less than 20 seconds of overall screen time, but over the hundreds of times I’ve watched Armageddon, he’s always stuck out to me.

The opening taxi scene of Stripes has very little to do with the rest of the film, but it’s a great set-up for the character of John, as played by typical Bill Murray-ness by Bill Murray. He has a pushy female passenger who doesn’t take kindly to Johns attitude, so he decides to have some fun with her, driving dangerously, taking pictures of her whilst driving and, when she threatens to report him, he abandons her in the middle of the road. If it’s ever possible for me to include Bill Murray on a list I will, so here he is. 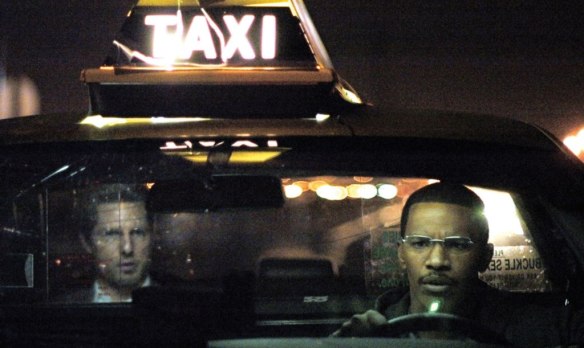 Given that Collateral‘s Max is the protagonist of the movie, it’s only right that he gets a slot on the list, despite my otherwise mediocre opinions of the film. He’s a great character, driving the cab to earn some money, enough to set up his own limousine company, and eventually make it to the tropical island postcard destination he keeps in his sun-visor, and who really didn’t need Vincent (Tom Cruise) dropping into his life and wrecking his night. This was the film that alerted me to Jamie Foxx’s acting abilities (I still haven’t seen Ray) and I’m always disappointed he doesn’t do more with his talent. He was a little overshadowed by Cruise, who received most of the publicity because he was playing a) the villain and b) a man with grey hair. Cruise is undoubtedly excellent, but Foxx deserves some praise too.

Another Willis role, and this time he definitely deserves a spot, because Korben Dallas is a cab driver, despite the fact that he lives in the future and his taxi can fly. As with Foxx in Collateral, Willis always seems to be overshadowed by the larger than life characters around him – Gary Oldman’s ridiculous villain, Milla Jovovich’s nubile Leeloo, Chris fucking Tucker – but Dallas is a solid lead throughout, and id a perfect fit for Willis’ everyman seriously-what-the-heck-have-I-gotten-into-this-time charm.

As with Bill Murray, if I can get Ernest Borgnine onto a list, you can consider him there. In John Carpenter’s bonkers Escape From New York he plays Cabbie, the most loveable criminal convicted and locked up on the walled-in island prison. Inexplicably he still drives a taxi, doling out friendly lifts and advice like a video game end of level cut scene, but with added molotov cocktails. I love Borgnine, and when he passed away 2 years ago I wasn’t exactly surprised – he was 95 after all – but I was deeply saddened. His is a career I desperately need to explore further.

5. The Ghost of Christmas Past (David Johansen), Scrooged

It’s a stroke of genius that the first of the three ghosts Frank Cross (Bill Murray) encounters is a New York taxi driver, complete with cackling laugh, New Jersey based insults and a time travelling taxi. This is a very non-Dickensian version of the Christmas classic, and the Ghost of Christmas past, stealing Bobcat Goldthwaite’s brown-bagged bottle of whiskey and with a cab full of cigar smoke, is possibly the least Dickens-like character of the lot. 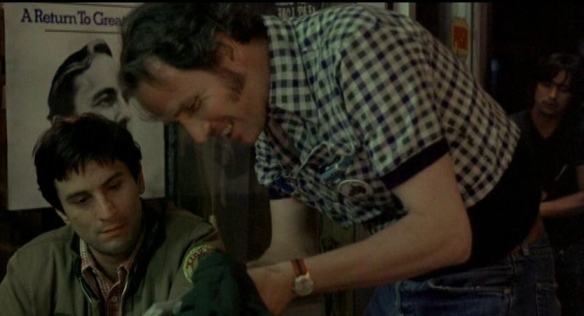 The obvious choice for this list is Robert De Niro’s Travis Bickle, what with him being the film’s lead and having the most screen time and character development, but I preferred Doughboy, despite him only having a couple of scenes. He earned his nickname because he has a reputation for doing pretty much anything for cash. We don’t see him do anything sordid, but he is deluded enough to be trying to sell a fragment of Errol Flynn’s bathtub. Nutter.

This could be a difficult choice to win other people over on. You see, Daylight was my first ever favourite film, despite many people being completely unaware of its existence. I don;t blame them, because it’s a pretty by-the-numbers disaster movie, with a small band of strangers trapped together when a tunnel collapses, and only Kit Latura (Sylvester Stallone) can save them. He’s a cab driver, but he’s also a disgraced former paramedic, and he makes his way into the tunnel to lead the survivors out. I watched it again recently, and it didn’t quite hold up to my memory, but I still really enjoyed it and think it should be rated a little more highly than it is. Plus, there’s an appearance from a young Viggo Mortensen as a thrill-seeking adventure junkie.

Just like with Taxi Driver, there’s more than one option in Total Recall for me to pick from here. I could have Benny (Mel Johnson Jr.), an opportunist rebel with five kids to feed, but instead I’m opting for the Johnny Cab, a robotic taxi driver who is destroyed by Doug Quaid (Arnold Schwartzenegger). I’m a big fan of robots, and this guy is iconic, in the way that makes the original movie far superior to the Colin Farrell remake. It’s this kind on insane-yet-awesome idea that we need more of in modern sci-fi.

Who Framed Roger Rabbit is a great example of one of those movies that would deserve a position on a heck of a lot of lists, and would probably be near the top of most of them. When it comes to movie taxis, there’s none that I prefer over Benny, Roger’s animated cab friend, who is conveniently locked up in the back of the police van he and Eddie (Bob Hoskins) try to steal. Instead they release Benny, and he escorts them to safety via his traditional taxi driver smalltalk (the weather, sport, other road users), some nifty driving skills – including the classic lever that elevates the car on legs that defy any kind of engineering logic – and a nice line in puns – what exactly do you call the middle part of a song?

So, did I miss any? Let me know in the comments if I forgot your favourite movie taxi driver!