After work one day, site foreman Ivan Locke (Tom Hardy) gets in his car and heads home. However, a split decision at a junction threatens to spin his life apart, as instead of going to see his wife and kids, he opts to resolve another matter, all on the night before the biggest day of his career. Where is he going? What effect will it have? And why is this seemingly good, regular guy willing to potentially throw so much away? All will become clear as we journey with Ivan, never leaving him or his car.

Some films begin with a gimmick. I don’t mean the start of the film, I mean the beginning of its production process, the pitch to the studio, the moment the movie starts being made. Here, that hook is that for the entirety of this just-under-90-minute movie we stick with one character, and in fact his is the only face we ever see. Not only that, but pretty much all of the film is set within his car as it heads along the M1 from Birmingham to London, and all the dialogue and action comes from a seemingly endless series of phone calls Locke has with his family, colleagues, superiors and whomever is awaiting him at his destination, as he tries to explain his reasons behind what he is doing, and attempts to rectify the chaos his mission may cause. This is far from being the first film set in one location with just one actor. Recent years have seen the likes of Ryan Reynolds trapped in a box in Buried, Stephen Dorff captured in a car boot in Brake and Robert Redford stuck on a lifeboat in All Is Lost, but I’m pretty sure this is the first film where survival isn’t the overall endgame. Locke’s physical existence is never at risk, and whether he will be alive or not at the end of the movie doesn’t come into question. This is a real guy, dealing with some very real problems, and it just so happens that they’ve all come to a head on this one night.

Tom Hardy is amazing here, which is just as well given he is not only the title character, but the only one we ever meet. It’s very much a low-key, subtle role – as I’ve said, he’s playing a normal guy, not some masked terrorist, convicted killer or mixed martial artist. He’s a construction foreman, a down-to-earth, solid, dependable guy, and Hardy brings all this to the role. So much of his character is brought through just from the way he speaks to people, remaining calm and reassuring when they’re flying off the handle at him. He’s easily at his best when discussing his work, and if this film did anything for me, it inspired me to try and be more passionate about my day job. Locke quite possibly lives for concrete, and when he gives a speech to his second-in-command Donal (Sherlock‘s Andrew Scott) about precisely which grade of concrete to use, and what could happen if a mistake is made, I felt just as pumped up as though Mel Gibson was yelling “Freeeeeeeeeeedooom!” 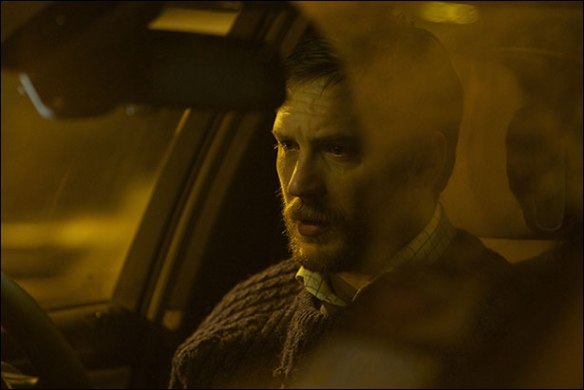 Outside of Hardy, the supporting voice cast is all great too, and in fact they each recorded their dialogue live alongside the journey Hardy was driving, calling in at the relevant moments from a hotel room, and recording their lines directly to him, which is a novel approach that most definitely paid off in the end. Olivia Colman and Ruth Wilson are the real standouts, and manage to emote so perfectly using just their voices that not seeing them perform doesn’t take anything away. It’s what they are saying and how they are saying it that are important.

Where I was let down, however, was the visuals. Building a film around a single mode of transport travelling along a relatively uninspiring stretch of British motorway offers nothing but limitations when it comes to shooting the imagery. As impressive as it would have been to shoot the entire thing literally inside of the car, in order to break up the story a little the camera often heads outside, and then you’re stuck with just how many different ways are there to show a car heading along the road. Too many shots types are repeated – I lost count of how many times the above-the-rear-wheel-shooting-down-the-car shot was used, and the same goes for how often we see the progress made on the SatNav in the dashboard. The use of reflecting street lights and the headlights of other road users provided a hypnotic, night-club-like aesthetic which was simultaneously eerie and beautiful, so there’s that, but in terms of shot compositions I was left unfulfilled. However, that comes with the territory in this kind of film.

Finally, I think the story needed to be tightened up. The premise of one-guy-in-a-car-on-the-phone was dreamt up long before the screenplay was started, and as such there are a couple of holes in the plot that need to be ignored in order for the premise to work and the tension to be ramped up. I’ve avoided potential spoilers in this paragraph, but if you want to skip it then go ahead. Firstly, the initial plan for Locke’s family was to watch a game of football as a collective, yet once on the road the man spends a lot of time talking to Donal, instructing him on things he must do immediately, for the sake of the job. How exactly would Locke have been able to watch the game with his wife and kids if he was still on site checking everything and making the phone calls Donal is tasked with doing? Secondly, the destination and event Locke is heading to is something he could easily attend and make back again in one night, in time for the build the next day. Yes this would still screw things up with his family, and he would still need Donal’s assistance that evening, but he’d have had less issues with his employers, which would have made things considerably less stressful.

That being said, I was still thoroughly impressed with this movie, and cannot recommend it enough. Hardy delivered an awards-worthy performance, and the achievement of creating this much tension, ecstasy and gut-wrenching heartache using just a man, a phone and a car for 85 minutes is something that should be applauded.

Locke is released on DVD and Blu-Ray in the UK from Lionsgate on August 25th 2014.