This review was originally written for Blueprint: Review a few months ago, but I’ve saved it here for HitchcOctober!

In the late 1920s/early 1930s, Hollywood produced a number of musical and comedy revues; a selection of skits, dances and musical numbers, combined together into one long production, similar to a modern day Royal Variety Performance, but without the obligatory monarch amongst the audience. In response to these, Britain retaliated with Elstree Calling, a more comedic take that almost parodied the American counterparts, whilst still showcasing a range of talented performers from the time, and linked together by a sporadically inept compère, a desperate Shakespearean performer (the greatest Shakespearean actor in captivity) and a man attempting to re-tune his television set to watch the broadcast at home. 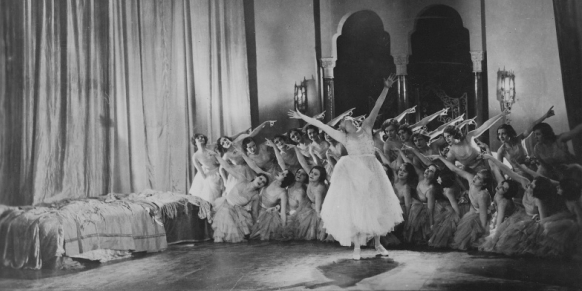 As with all variety shows, an attempt has been made to include something for everyone, which makes the whole thing very hit and miss. Personally I’m not a fan of dancing and big musical numbers, so these sections left me bored – it didn’t help that they went on for what seemed an excruciating amount of time – but there’s no accounting for taste, and as often as I was bored by the music I was entertained by the comedy, particularly from the running gag of the Shakespearean actor, whose culminating rendition of The Taming of the Shrew – complete with custard pies and a renegade motorcycle – was a highlight for me.

Some areas fell completely flat – there’s a section devoted to a couple of Russian acts that feels very out of place and time-filling – and whilst the dancing of the Three Eddies was very impressive, I couldn’t help feeling more than a little uncomfortable at how much enjoyment I seemed to be getting from a black-face trio. It’s very much a sign of the times and should be looked upon as such, but when they were brought out for a second performance I’d had more than enough discomfort for one evening.

My main reason for watching this film was because I’m something of an Alfred Hitchcock completist, and I’ve made it a mission to watch everything the great man directed. Elstree Calling features very little of his work, but he did contribute to it, and therefore it’s on my bucket list. He is responsible for directing the connecting sketches of a man at home attempting to fix his television to watch the show, whilst his upstairs neighbour keeps popping down to let the man know just how fabulous the show he’s missing is. When compared to the rest of Hitchcock’s work – even some of his lesser early projects – there was a lot to be desired in terms of directorial flair, and one wonders if the only reason he agreed to participate was because of his contract with British International Pictures at the time. If you’re attempting to see all of the man’s work, I can probably advise you to skip this, if only for how little of the film was his responsibility.

That being said, I’d still recommend it for non-Hitchcock completists, as long as you’re fans of variety performances or 1930s cinema. It’s not a bad restoration, although some of the scenes show signs of cracks and wear, particularly the few that have been partially coloured, as this makes the imperfections really stand out. There’s some Python-esque humour I was not in any way expecting, with occasional farcical elements, dramatic scenes topped with out-of-the-blue punchlines and self-referential semi-meta moments that had me wondering if I’d just seen what I thought I had. The four-man harmony set-up is just fantastic, with the lead singer taking somewhat drastic action when one of his colleagues misses a word or a note, and if you really need a reason to watch it, there’s possibly the only example of someone playing the air-xylophone that I’ve ever seen.