In 1831, Charles Adare (Michael Wilding) the governor’s cousin and youngest son of his family’s wealthy estate, arrives in Sydney to leave his mark. He soon meets Mr. Sam Flusky (Joseph Cotten) a local businessman and land owner, whose emancipated past leaves him with an ill reputation around town, particularly with the governor (Cecil Parker), with whom Charles is staying. Charles is forbidden from engaging with Flusky in any manner, but the reckless younger man disobeys his superior, and heads to Flusky’s house anyway, despite the many warnings he receives from numerous, unrelated people. At Flusky’s dinner party, Charles runs into Flusky’s wife, Henrietta (Ingrid Bergman), who usually remains out of the way and hidden. It soon becomes clear that Hetty has an alcohol problem and is regularly drunk, but once Charles recognises Hetty as being a friend of his sister’s from their youth, the newcomer sets about improving her condition, much to the annoyance of Hetty’s maid Milly (Margaret Leighton).

Amongst Hitchcock’s back catalogue, there are many films with a high regard, that most people have heard of and hopefully seen. There’s also a large swathe that many have never come across, for some reason or another, and this is a category into which Under Capricorn comfortably sits. I’d never heard of it before I listed all of Hitchcock’s movies, and were I not undertaking this endeavour to watch all of his films, I doubt I’d ever have seen it, and I don’t think that would have been a bad thing. This is far from being a bad film, it just feels very unnecessary considering some other works amongst Hitchcock’s career.

The biggest similarities can be drawn with Rebecca (I’m an expert now, seeing as I watched that movie for the first time all of three days ago). You’ve got a period setting, a beautiful woman being driven potentially insane by the home she lives in, (supposedly) surprising third act revelations that alter everything you’ve seen before that point, and of course the evil maid. And fuck me, if Milly isn’t an evil little bitch. Performance-wise she isn’t a patch on Judith Anderson’s Mrs. Danvers, but she still plays a character whose mere background presence belays her Machiavellian tendencies, and she gets one of the film’s more terrifying moments very near the end (though that comes more from what she is carrying than anything she does herself). What really makes Milly evil, though, is how little motive she has for doing anything at all. She has so little reason that you can’t help but think she’s doing it all for kicks. 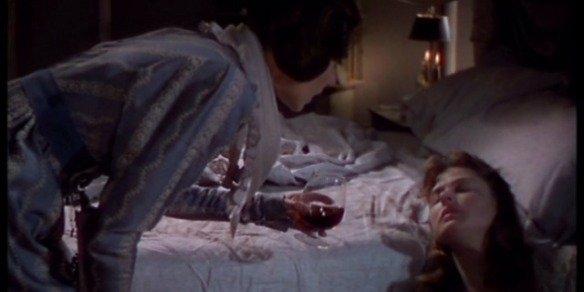 This is a fairly slow, very melodramatic story that, for the most part, revolves around Hetty attempting to rebuild her life after it being affected for so long with alcoholism. There are undercurrents of a potential romantic relationship between her and Charles, and also the mystery of exactly what crime her husband committed to force him to be sent out there – and how Hetty came to be there herself – but the main drive is Hetty, which makes it so unusual that she’s one of the last characters we actually meet. Bergman’s performance is spot on, it’s just a little too mopey to be enjoyable, whilst Cotten is stuck on stern, only allowing himself the occasionaly moment of softness when discussing his love for his wife. Wilding unfortunately suffers from looking exactly like a young Alan Cumming, which was wildly distracting whenever he was on screen. His character is a bit of a twit; a headstrong and foolish man who rarely heeds sage advice and believes he can get away with anything thanks to his upbringing and his belief in whatever his cause is at the time.

If there’s one thing I really approved of here, it’s Hitchcock’s use of long takes. Many scenes would not look out of place in Rope (other than being set in 1830’s Australia, rather than a 1940’s New York apartment), in that there are no cuts if they can be avoided. One such shot begins with a conversation between Hetty and Charles on the ground floor, then heads up the stairs to find Milly and the butler (Jack Watling) in Hetty’s room, removing her latest stash of empty bottles. It follows them back down the stairs and into the kitchen, where Hetty is talking to the raucous former-criminals that make up the kitchen staff, and ends with Hetty running back up to her room. I love shots like this, and the film is full of them, some involving the camera floating up from an outdoor conversation to a person on a balcony, or following Charles as he tracks through a series of doors down an endless corridor. 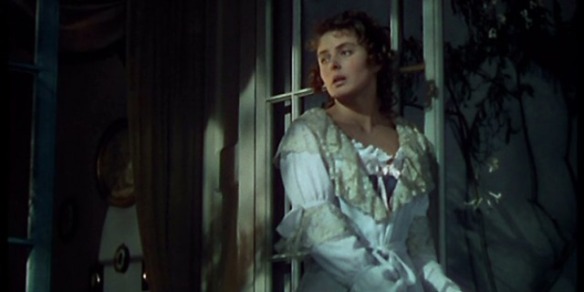 Considering this is mostly a fairly heavy drama, there are some odd moments of comedy peppered throughout, be it the governor taking a bath in a very small, shallow tub and plunging his hand around it looking for the soap, or an impromptu breakfast competition to determine which kitchen staff member will be the chef. Most of these moments don’t work as anticipated, instilling confusion over their inclusion rather than a moment of levity amongst the melodrama. I felt the complexities in the third act, with characters placed within intriguing ultimatums, could have been played out further too. As I said, if we have Rebecca, we don’t need Under Capricorn.

2 thoughts on “HitchcOctober Day 16: Under Capricorn”