Robert Tisdall (Derrick De Marney) is out walking by the beach one day when he sees a body in the water. He rushes down to discover it is Christine Clay, an actress and friend of his, and she has somehow died and washed up on shore. Clearly shocked, Robert rushes off to get help, but is seen fleeing the scene by two women, who later accuse him of the murder, as does everyone else, which isn’t helped when the murder weapon is ascertained to be the belt from a raincoat, and Robert’s coat went conveniently missing not long before the crime was committed. Moments before Robert’s trial he escapes the court and goes on the run, dragging along Erica (Nova Pilbeam, the little kidnapped girl from The Man Who Knew Too Much, now 18 years old) the police chief’s daughter to help. Robert believes all he has to do is find his missing raincoat and he’ll prove himself innocent 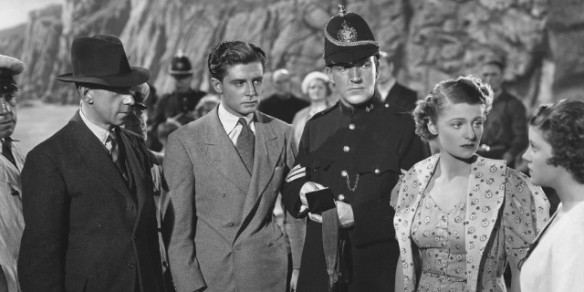 How many times can one director make the same damn film? I’m getting rather tired of it, and in fact, getting tired of Hitchcock movies in general. I’ve been spending too much time amongst his early work, I think, and neglecting some of his later classics. I want to watch Rear Window, dammit! As it is, after Young and Innocent there’s only one “early” film I can get hold of, Easy Virtue, so from now on they will mostly be from his later career. Hurrah! And I’m hoping against hope that there aren’t any more films about innocent men being framed for a crime they didn’t commit, going on the run with an initially disapproving young girl who eventually believes his story, falls in love with him, helps him prove he’s innocent and takes him home for dinner. Though somehow I think there’s still a couple to come. Sigh.

I think what’s most annoying here is that the film to which this draws the most comparisons is The 39 Steps, which was released just two years before Young and Innocent, and is much better, particularly with regards to the two leads. You see, Robert Tisdall is a bit of a prick. He’s far too confident and smarmy for a guy heading to a certainty of being sentenced with murder, and should be far more nervous once he’s broken from jail, but he’s too smooth and cocky by half. Many of his interactions with Erica are odd or nonsensical, with his behaviour seeming entirely off for the situation he’s in. If the film weren’t called Young and Innocent, I’d have thought him to be secretly the villain.

I found the plot and characters dull, with odd exceptions such as Old Will the China Mender (Edward Rigby), a tramp with information regarding the belt’s whereabouts, and the dithering court-assigned lawyer Robert receives, with his extreme short-sightedness and only caring about receiving his fee, combined with the absolute certainty that his client is guilty. There’s also a bizarre scene of Robert and Erica attempting to escape a children’s birthday party they’ve become entangled in (look out for Basil Radford, the moustachioed Englishman from The Lady Vanishes!). Also, the scenes with Erica mothering over her four younger brothers at dinner were fun, particularly the fairly realistic banter between the boys. And the dead rat.

There’s another unexpected climactic moment of action, when Erica’s car falls into a collapsing mineshaft, which was fun but short-lived, and the ensuing actual final scene paled in comparison, being another instance where our hero is nowhere to be found on screen. In short, this is another example of a redundancy amongst Hitchcock’s work. Just as we don’t need Under Capricorn whilst we have Rebecca, we don’t need Young and Innocent whilst we’ve got The 39 Steps.

1 thought on “HitchcOctober Day 22: Young and Innocent (The Girl was Young)”