Colonel Paradine, a wealthy blind man, has been murdered by a poisoned glass of burgundy. His wife (Alida Valli) is the prime suspect, and is therefore arrested. Via the family solicitor Sir Simon (Charles Coburn), she hires hotshot lawyer Anthony Keane (Gregory Peck) to defend her, but things get tricky when Keane starts to fall for his latest client, despite being happily married to the idyllic Gay (Ann Todd), who is also friends with Sir Simon’s daughter Judy (Joan Tetzel).

This is it, the final film of 2014’s HitchcOctober! You can expect a wrap-up piece to summarise the month at large tomorrow, but for now I’m going to try and temper my excitement at completing the challenge into offering a fair-minded and level-headed review of this relatively unremarkable film which, other than a few stand out exemplary performances, doesn’t have a great deal going for it.

Firstly, Gregory Peck is terrific, playing a very different lawyer to the role he’d become most famous for 15 years later in To Kill A Mockingbird. Where Atticus Finch is more respectful and mature, Keane is more prone to showboating and melodramatic questioning trails, becoming overly aggressive, generally more so than the situation requires. Of course, this is more to do with how his personal feelings are affecting his performance in the case, but one feels such a predicament would never occur with Mr. Finch. Peck’s performance is spot-on and gripping, it’s just a shame it’s engulfed in a predictable, silly plot that never goes anywhere unexpected or interesting.

On the plus side, the supporting cast is just as good as Peck. Ever since Jamaica Inn I’ve been looking out for another Charles Laughton performance, and we get a great one here as Judge Horfield, presiding over the case. We first meet him at a dinner party attended by Sir Simon, Keane and his wife, during which Horfield comes across as a lecherous, sweaty oaf, who describes Keane’s wife as looking “very appetising,” and seems particularly engrossed in her bare shoulder, but as soon as he enters the courtroom he’s all business, not falling for any of Keane’s pandering or flash trickery, rapidly snuffing out several lines of questioning before the defendant can really get going with them. It felt a little odd seeing the character outside of the courtroom, as he really didn’t add anything to the main story, but I feel once Laughton was cast the film-makers probably wanted to utilise him more, so added some scenes for him to steal.

Alida Valli, as the accussed Mrs. Paradine, doesn’t really get a great deal to do, requiring for the most part to be standoffish and distant, meaning Keane’s falling for her is never quite understandable. However, I feel this is more a fault that can be attributed to the script or the direction than to Valli herself. Similarly, the other two main female roles didn’t impress much either, because they either were superfluous characters or were required to be far more sympathetic and understanding than any sane person would be, given the circumstances. 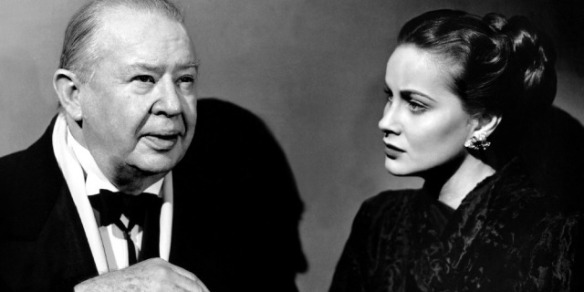 The first half of the film sees Keane take on the case and do some investigating, including putting on his metaphorical detective’s cap and heading out to meet the Paradines’ housemaid (who may as well be called Danvers) and Latour the valet (Louis Jourdan) who apparently has information regarding his master’s death. I bring this up because A) the scene in which Latour takes to the stand is the best in the film, with Keane verbally attacking the man until he breaks down, and B) there’s an earlier scene between Keane and Latour that had me in a fit of childish giggles that I’m not proud of, but will detail anyway. Keane goes to the Paradines’ house to scope out the valet, who disappears before Keane can talk to him. After returning to his lodgings, Keane finds Latour has followed him back, and Keane reveals he is Mrs. Paradine’s lawyer, and Latour is a witness for the prosecution, so the two of them cannot be seen talking to one another. Cue Keane exclaiming “I happened to come on you purely by chance!” and Latour replying “But you wanted to come on me!” I told you it was childish, but that didn’t stop me having to pause the film until I stopped tittering. 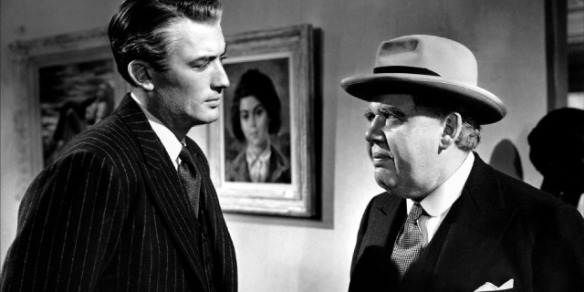 The second half of the film is easily the better half, predominantly taking place inside the court room, watching the trial pan out. If you don’t understand what’s happening throughout this painfully straightforward case, there’s an entirely unnecessary running commentary provided by Judy explaining the situation to Gay. This, as well as the lack of any real revelation despite the entire film seeming to ramp up to one, were the final nails in this lacklustre coffin.