This is the first movie I’m crossing off my Nominated Movies List, wherein I’ve asked some bloggers and podcasters I interact with to pick movies I’m unfamiliar with from the 1001 List to watch this year. This was selected by my Lambcast co-host Robert Zerbe from To The Escape Hatch, and it also coincides with French Toast Sunday celebrating Michael Mann month, so hurrah for synchronicity!

When I mentioned in passing to a few people that I was watching this, I was told that Manhunter is Michael Mann’s best film. Considering how amazing I think Heat is, that’s a pretty outlandish statement to make, so I tried to temper my expectations and not anticipated something better than that sprawling crime epic. Fortunately, I seemed to balance those expectations perfectly, because I absolutely loved Manhunter. 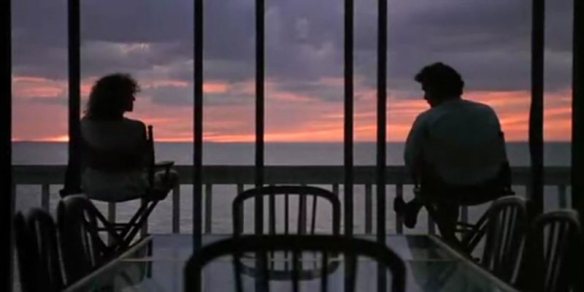 It’s a film that has taken all the stereotypical cop movie clichés and, instead of removing them entirely, it makes them work and gives them some kind of sense. First off, there’s the guy who is the “best there is” and needs to be called in for one last job. This is one of the most overused elements of cop movies, but here it works because it takes the angle of investigating what would happen to the typical movie “hero cop” after he’s caught the master criminal and suffered the consequences of going up against a ruthless mastermind. Will Graham is a damaged person, a man driven by a desire to save everyone, and to give his family a safer world to live in. His boss knows that if he shows Will two photos of young families who are no longer alive, Will won’t rest until he can ensure no more families get added to that list. It never feels forced, it flows naturally and above all it makes sense.

Yes the perpetrator of the murders is a twisted oddball (Tom Noonan who, and I don’t mean this to sound too mean, but he really does have a perfect face to play a serial killer, see also Last Action Hero), but we’re given an insight into just why he behaves like he does. His perception of reality has been skewed by living life as a man who knows everyone else finds him ugly and repulsive, therefore any action towards him is seen through such a veil. His constant misinterpreting of the world leads to a desire to enact vengeance where no sin has been committed, which is just the right level of believable insanity to allow us to understand why the crimes are being committed. And it’s important to note that the film opens with us in the killer’s head. We see his second kill, or at least the lead up to it, entirely from his perspective, as he breaks into a house and finds the mother upstairs, asleep next to her husband. His torch light sits on the woman’s face until she awakes, and then we’re done. The next time we see the scene it’s when Will is examining it, and we see him, not what he sees. It’s almost like we’re supposed to feel sorry for the killer. Michael Mann, you wily devil you. 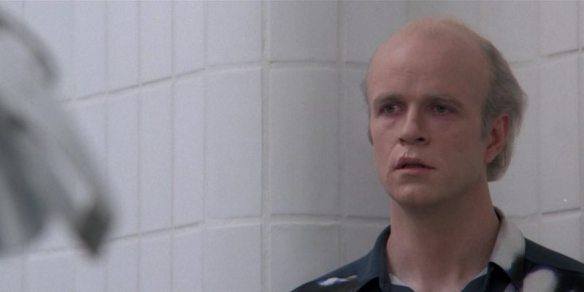 All the details we’re shown of the case make sense, and it also makes sense as to why we’re being shown them without the ending becoming blatantly obvious. There’s no scene of the detectives walking past a janitor, whom the camera sits on for half a beat too long, ensuring the guy with the mop, bucket and pulled-down-cap sticks in our memory because he’s really the killer. No, we see everything Will does, but we don’t need or even want to second guess the plot and predict the outcome, it’s much more interesting to watch him come to it. I was expecting a lot more gore, and thankfully it never arrived, being almost entirely implied. We’re told what the killer did to his adult victims, but spared the details of what happened to the children. Later, a character is shown images of what has been done, but we don’t need to see them when we can tell they’re horrific by the reaction on that character’s face. I’m very, very glad we didn’t see the pictures.

I’ve been dancing around it, but perhaps the most famous aspect of this movie is that it’s the first to feature the character of Hannibal Lecktor (name changed for some reason, probably). I’ve only ever known the character as being played by Anthony Hopkins (I’ve never seen Hannibal Rising or the Hannibal TV show, just the other three movies, of which I remember precisely nothing from Red Dragon, which used the same story as this film). I’ve always liked Hopkins’ performance, but found it maybe too over the op and open to parody. Brian Cox, on the other hand, dialled it way back down to give a much more restrained depiction of a far more believable character, which possibly makes him even more chilling, because there’s a far greater chance of this person not only existing, but being so seemingly normal that he could be walking amongst us undetected. Whereas Hopkins role overtook not just the scenes he was in but the entire film, here I could have perhaps done with a little more Lecktor.

For the rest of the cast, Petersen is good if a little hammy and prone to over acting at times, but the supporting cast is stellar. Dennis Farina is always good fun, and he doesn’t disappoint here. He gets to use his smarmy face when Will proves himself very useful, which was a delight. Joan Allen was an unexpected second female character in the third act as a plucky blind girl you desperately hope survives unharmed, and there’s an almost unrecognisably young Stephen Lang as a wily scumbag of a reporter. I fully approve of everything that happens to him. 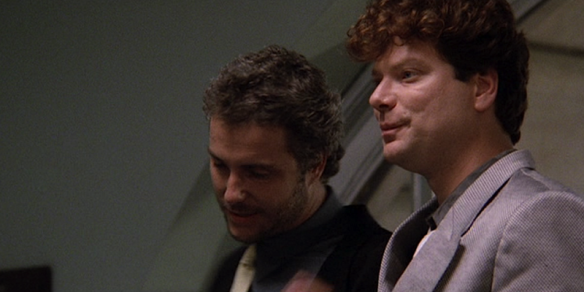 Yes, the score is more than a little dated, but somehow that heady, pulpy feeling it gives the movie makes it all work. And yes, the climax goes way to far off the rails given how restrained the rest of the story has been, but it had to end on a higher note. There had to be some release for all that built up tension. I’m very glad this film was recommended to me, thank you Robert, and I can only hope that the remaining 51 movies to watch this year are all equally as incredible.