Two families – the Stoneman family from the North and the Southern Cameron clan – are friends with one another, with clear romantic interests between males and females on both sides. However, when the American Civil War breaks out the families find themselves in opposing camps. Both suffer losses until a Cameron son ends up being cared for by the Stoneman daughter in a Northern hospital when the war ends. All looks to be well until President Lincoln is assassinated, at which point everything becomes more racist than could possibly be imagined.

I’d heard this film often leaves a bad taste in peoples’ mouths. Early on I assumed this was due to the many white people portraying African Americans via blackface, walking in a kind of sloping manner and having intertitles along the lines of “Ef I doan’ get ‘nuf franchise to fill mah buck, I doan’ want it nohow.” Later, however, it became somewhat clearer as to just how racist this film is. This is a film in which the heroes who show up at the end to save the day with the orchestral swell behind them are the Ku Klux Klan, burning crosses held high as they charge upon their white steeds to rid the South from the negro scourge. You see, in the wake of a forceful leader for their country, the African American population in the South have taken it upon themselves to rise up against the white folk and claim the world for themselves, preventing white people from voting and attempting to forcibly marry the white women. Elected black officials are shown as being uncouth and disrespectful, getting drunk during meetings and sitting with their bare feet on their desks, with the outnumbered white congressman powerless to do anything.

So if it’s so despicably awful, why is it still discussed today? Why has this not been dismissed from history as a moment of shame we should all forget? Well, unfortunately, this is a really important film in terms of how it was made. Literally every element of film history since 1915 owes a debt to The Birth of a Nation and its director, D. W. Griffith. Amongst other things, this was the first known instance of huge outdoor scenes with hundreds of extras, shooting scenes at night, moving the camera for a panning shot and cutting back and forth between two or more scenes occurring simultaneously. There’s also colour-tinting, a custom-written orchestral score and a structured plot that builds to a dramatic climax, not to mention the epic running time. I think it’s fair to say that if the subject matter were more socially acceptable this would be revered for its impact and ingenuity alongside the likes of Citizen Kane. 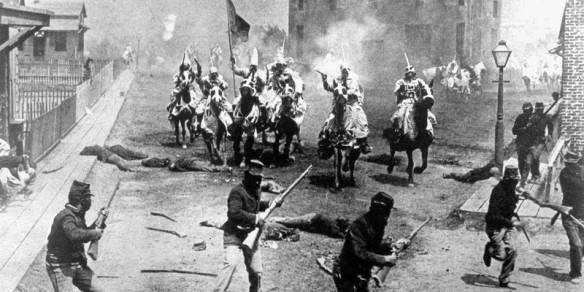 That being said, and even with the racism aside, Kane is a much better film. Nation may well have been ground-breaking, but from a modern perspective it’s a difficult and often arduous watch, taking me a couple of days to finally get through it all. It’s painfully slow, with too many characters who are difficult to distinguish from one another. This may be intentional, showing how the people from the North and the South aren’t so different after all, but it made it very difficult to follow narrative-wise, and the climax, which takes place over several different locations, has very few characters we’ve gotten to know over the film, so it’s difficult to care about some of the areas. It’s also far from subtle, which is very much a sign of the times but is worth noting regardless. The intertitles will occasionally literally spell out the themes of the film, just in case the image of a man from the North and a man from the South dying next to one another on the same battlefield didn’t quite explain it all for you.

This may well be the grandfather of modern film-making, but it’s the grandfather who doesn’t get invited to the family reunions because he has a tendency to go on overlong racially charged rants and drool in his dinner. It should be praised for birthing so many techniques used today, but there’s absolutely no need to watch this film to sing those praises.

6 thoughts on “The Birth of a Nation”