Back in January one of my many film-based resolutions for 2015 was to meet up with some other members of this film blogging world. Interacting on a daily or weekly basis in written and audible format is glorious, don’t get me wrong, but there’s nothing like meeting someone face-to-face to have a really in depth movie conversation, or trade Stallone impressions. This weekend saw this resolution soundly thwarted by the first official UK LAMB meet-up, which saw a gaggle of us film bloggers meeting up in London for various group activities revolving around food, drink and films. I took a total of zero photos during the weekend, because I don’t generally take a lot of photos, and also I was trying to maintain some modicum of phone battery in case meet-up stragglers were trying to get in contact, but fortunately some of the other attendees were not so power-stingy. 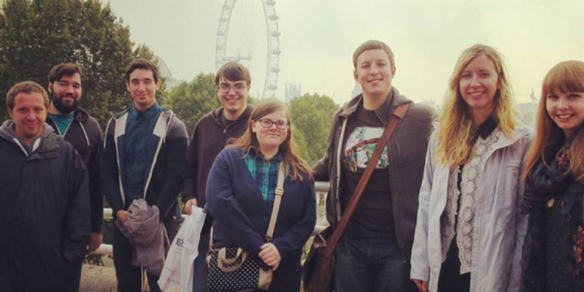 So what occurred? Well, I met up with Jess, Rob, Lindsay and Jason on Friday morning. We went to Borough market for some delicious food-stuffs, where I also introduced them all to the English sangria that is Pimm’s. After a wander round Shoreditch we were then joined by Mette, Joel and Will for a curry, before Mette headed off to see Benedict Cumberbatch in Hamlet whilst the rest of us set about the far more civilised activity of getting shit-faced on a pub crawl resplendent with movie-based debates (Will thinks Mad Max: Fury Road was too long, Joel’s anticipations for Star Wars have leap-frogged The Force Awakens in favour of Rogue One, that sort of thing).

The next day, after far too little sleep, it was the official Meet-Up proper. I’m not renowned for organising events, it’s not something I’ve done very often and I’m not very good at it, yet here I found myself trying to organise a mass meet-up in a city I’ve not lived in for almost a decade and barely went out in when I did live there, so as you might expect not a lot went to plan. I met Jess, Rob, Lindsay, Jason, Elwood and Mette at Waterloo train station in the morning, except that train delays and minimal prior communication made this take longer than expected, so breakfast turned to brunch and brunch turned to lunch as we headed to the food market near Southbank. We were joined by Tony and Rebecca to explore the BFI for a while, then headed to the Curzon Cinema, as recommended by Simon, where Will and Joel joined us. The plan had been for us all to see The Martian, except the Curzon wasn’t playing it. Nor was it playing the back-up option of The Walk (or the significantly less likely option of The Green Inferno), so we trekked to the Leicester Square Empire Cinema ( not actually that far, central London seems to be about 60% cinemas) which was playing The Martian, but only had 5 seats left. Thus ensued a panicked trek around every cinema in the vicinity to see literally any movie that wasn’t The Internship or The Maze Runner: The Scorch Trials, but which would give us time to make our 8pm dinner reservation. We eventually settled on Macbeth at the Central Picturehouse, because some people really wanted to see it based on the trailer image of Michael Fassbender emerging from a lake, and it seemed apt to have the UK meet-up involve Shakespeare in some format. My thoughts on The Scottish Film can be read later, but afterwards those of who could stay (Elwood had to leave early for family reasons, but David, Simon and his wife Sarah joined us for the film) recorded mini Lambcast segments in the coffee shop below the cinema, which I’ll be piecing together into a podcast later this week. We then went to Fire and Stone near Covent Garden for a delicious dinner that also included a round of Last Lamb Standing, before after dinner drinks in The Coal Hole, specifically in an absolutely perfect basement room that would have been ideal for recording a podcast but it completely slipped my mind so our hugely entertaining conversation spanning recent TV shows, film-watching habits and the many and varied reasons why I’ve never tried coffee are all lost to the sands of time. Sorry about that.

Sunday once again found me meeting up with Jess, Rob, Lindsay and Jason as well as Tony for breakfast near Southbank again before the FTS gang and I headed back to Bournemouth for a couple of days. I took them to my friend’s coffee shop, Espresso Kitchen, then we cooked them a traditional Sunday roast and drank into the night. We introduced them to such stalwarts of British Popular Culture as Countdown, Mr. Blobby, Pointless, Cornish pasties, Catchphrase and Don’t Tell the Bride. Trying to explain why there’s a talking dog selling car insurance on TV was a challenge.

Scheduling snafus aside, this has easily been one of the best weekends of recent years. The only downside is now everyone has done home, and I don’t have anyone to discuss movies with any more. But that just means I’ll have to arrange another meet-up again sometime soon, this time with pre-booked cinema tickets. If you’re in the UK or nearby (as well as Baltimore there were attendees from Sweden and Denmark) and were unable to make it to this meet-up fear not, we’re going to try and make them semi-regular occurrences every few months or so. If you want to be involved in the plans for the next one, get in touch!

Here’s what we watched this week: 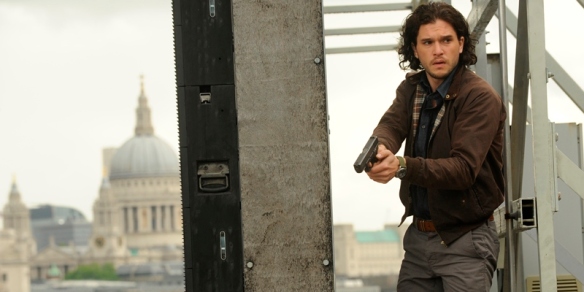 We watched this for two reasons, the first being “Kit” and the second being “Harington”. You could say he’s the man my partner wishes I was, and if you were to say that you’d be absolutely correct. Bloody Jon Snow, making me look bad with his long flowing hair and his abs. Anyway, I’ve never seen the show Spooks since maybe season one, and only then maybe an episode or two, so I’ve got no connection to any of the characters. The film was fine, following a disgraced MI5 Intelligence Chief (Peter Firth) teaming up with Kit Harington’s younger agent to help track down an escaped terrorist (Elyes Gabel), but it didn’t really do much new with the gritty urban spy sub-genre. Nice supporting cast though, including Jennifer Ehle and Tim McInnerny.
Lists: 2015 Movies
Choose Life 6/10

There are some Shakespeare works that I’m genuinely fond of, but they tend to be the lighter fare, like Twelfth Night, and I appreciate Othello so much I can quote it, but Macbeth has never been something I’ve been drawn to. I didn’t think I’d read it before (in hindsight I have, it’s just been a long time), and other than looking exceptionally beautiful (I anticipate the Oscars introducing a new award for Best Use of Fog) this didn’t add a whole lot to the story for me. Fassbender was terrific as the eponymous increasingly mad king, showing the gradual slide into insanity well, but Marion Cotillard didn’t seem to have enough to do for such a supposedly iconic character as Lady Macbeth. The better supporting actors of Paddy Considine and David Thewlis are similarly under-served, whilst the significantly more infuriating Sean Harris is all over the place, doing his best to ruin everything he touches. This felt like a bunch of monologues people were using to audition for another film, and I’m not all that ashamed to say I drifted off a little in the middle.
Lists: 2015 Movies
Choose Life 6/10

Jess and Rob wanted to watch a British film for their last night in Bournemouth, so we settled for this because neither they nor Aisha had seen it before, and it’s on a list for me. Very bizarre watching Daniel Craig do a lot of Bond-like behaviour before being cast as James Bond, almost as though this was his audition reel.
Lists: Empire Top 500
Full review coming soon.

Posts you may have missed:
The Birth of a Nation
Lambcast #289: Lambpardy – Another Lambpardy game sees reigning champion Todd taking on newcomers Aaron and Darren in a real nail-biter that may have been more effective if Todd’s dialogue had recorded properly and I hadn’t had to re-record everything he said via a Text-to-Speech program.

Aim: Review Kate Winslet’s remaining films
Reviewed: 3
To go: 0
Should be on: 2
On Track: COMPLETED!

Aim: Finish French Toast Sunday Road Trip series
Reviewed: 8
To go: 8
Should be on: 9
On Track: No!