In the town of Shinbone, Senator Ransom Stoddard (James Stewart) and his wife Hallie (Vera Miles) have returned for the funeral of Tom Doniphon, a man who evidently meant a great deal to them. When asked by the local press, Ransom recounts a tale of his youth, which began when he arrived at Shinbone an idealistic young lawyer intent on bringing a sense of law and justice to the west, a quest intensified after he is assaulted by vicious bandit Liberty Valance (Lee Marvin).

This film was nominated for me to watch by Dan Heaton of Public Transportation Snob. I knew nothing about it other than its western genre, and for some reason I’d assumed the main narrative would follow a posse headed up by Stewart and John Wayne, who would have opposing viewpoints on something and be rivals fro the same woman. They’d head out with a merry band of assorted town locals with the intent of bringing Valance down. Between them they’d succeed in killing him, though they’d lose a few of their men along the way. As it turns out this was an almost entirely incorrect prediction, other than the romantic rivalry part, with The Man Who Shot Liberty Valance instead being far more political than I could ever have guessed.

The focus is more on Ransom’s attempts to bring not just a sense of justice but also progress in general to the old west, introducing reading, writing, voting and teaching about history and rights to the townsfolk who’d had no knowledge of such things previously. That’s not the only narrative strand though, with Valance’s villainy running through most of the plot too. Lee Marvin makes a great villain, with his Valance coming off as a spoilt kid used to getting his own way, who enjoys bullying and belittling those weaker than himself and is frustrated and confused when situations don’t pan out as he’d intended, such as the town voting for a new delegate. Stewart and Wayne play roles they’ve become famous for playing in most of their films, with Wayne essentially playing John Wayne complete with many of his Wayne-isms like “Take ‘er easy there pil-grim,” that are always just fun to hear in his trademark laconic delivery. The presence of Stewart as a morally upright figure and all the political talk made this seem at times like Mr. Smith Goes To Shinbone, but that’s not a bad thing.

If anything, I could have done with more John Wayne. Despite top billing and this appearing in a John Wayne DVD boxset I own, he’s more of a supporting character, which is a shame because he adds a lot of energy and grabs your attention whenever he appears. The same can be said of most of the supporting characters, such as the cowardly, ineffective town marshal Link Appleyard (Andy Devine), the drunken newspaper editor Mr. Peabody (Edmund O’Brien) and the compelling orator Major Cassius Starbuckle (John Carradine). Such a rich supporting cast of characters must be praised, and were a joy to watch go about their lives. 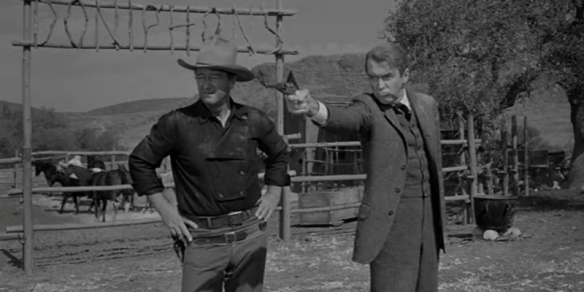 There are a few cliché scenes that appear in most westerns – the gun-training with cans scene, the one-on-one shoot-out, the female lead nursing the injured hero – but they’re all managed to be handled in fashions unique to other westerns I’ve seen. Apart from a pivotal twist near the end, which I called immediately.

2 thoughts on “The Man Who Shot Liberty Valance”